Pearl Harbor: A Day of Infamy 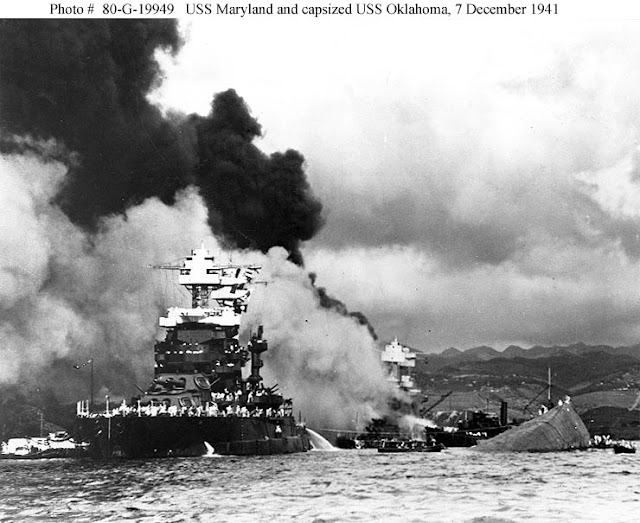 Just before 8:00 a.m. on Dec. 7, 1941, the first of two waves of attacking aircraft swept over Pearl Harbor. Barely 15 minutes later the most powerful battleships of the mighty U.S. Pacific Fleet were either sunk or burning wrecks. The California was half submerged, with her keel lying in the harbor’s mud. Nearby, the West Virginia had her port side torn open. Her twisted metal was burning, but for now she was still afloat. Two other ships, the Tennessee and the Maryland, were battered, but in better shape than their sisters. Beside them, the Oklahoma had been struck by a barrage of torpedoes and capsized. The U.S.S. Nevada was the only battleship to get underway that morning, but she was damaged and had run up onto the beach. The worst fate was suffered by the U.S.S. Arizona,which blew up and sank, taking over 1,000 of her crew with her.

The following day, President Roosevelt went before Congress and asked for a declaration of war against Japan. At the time, he could not have known that the attack on Pearl Harbor was only the beginning of a Japanese offensive that would conquer most of the Western Pacific. Wake Island fell two weeks later, after a truly heroic stand, and only five months after Pearl Harbor the half-starved “battling bastards of Bataan” also surrendered. Fortress Corregidor, in Manila Harbor, withstood a brutal siege for another month before it too fell, but only after the soldiers of the 4th Infantry Regiment fought off several attacks in hand-to-hand combat. By the time Corregidor was lost, 120,000 British soldiers had already surrendered Singapore to an inferior Japanese force. Furthermore, the British Army in Burma was in full retreat toward the Indian border. Capping this run of victories, the Japanese seized New Guinea and Indonesia and launched devastating air raids on northern Australia.

In those dark first months after the Pearl Harbor disaster, it was not apparent to many that Japan had already lost the war. For, despite sinking much of the U.S. Pacific Fleet, the Japanese had missed a couple of crucial targets. Foremost among these were the huge oil-storage facilities on Oahu. Their loss would have delayed the American counterattack in the Pacific by as much as a year. One can only imagine how much more costly the conquests of Tarawa, Saipan, Iwo Jima, and Okinawa would have been had the Japanese had another year to fortify them. Just as important as the oil facilities were the American aircraft carriers, which were at sea when the Japanese attacked. The first of them to return, the Enterprise, sailed into Pearl Harbor the day after the attack. Surveying the wreckage from the bridge, Adm. William Halsey could not hide his dismay and anger. When asked later about how America would recover, Halsey replied, “When this war is over the Japanese language will be spoken only in hell.” America had found the first of its fighting admirals.

In fact, even the Japanese naval genius who planned the Pearl Harbor attack, Adm. Isoroku Yamamoto, understood that Japan had made a horrible strategic mistake. Before the attack, he told the Japanese prime minister, “In the first six to twelve months of the war . . . I will run wild and win victory upon victory. But, if the war continues after that, I have no expectation of success.” His words proved prophetic. Almost precisely six months after the attack on Pearl Harbor, the American carriers that the Japanese strike had missed inflicted a crippling blow on the Japanese Imperial Fleet at Midway. In a gratifying turn of events for the Americans, the four Japanese carriers sunk at Midway — the Akagi, Kaga, Hiryu, and Shokaku — were all part of the fleet that had struck Pearl Harbor. In the time it took the Japanese to replace these losses, American industry, which had turned its pitiless might to war, had rolled out of its dockyards over two dozen carriers. To paraphrase Admiral Yamamoto, Japan had awakened a giant it could not hope to defeat.

The U.S. Pacific Fleet did not rely solely on American industry to produce the ships needed to overwhelm the Japanese navy. All through 1942 and 1943, salvage crews and mechanics worked around the clock to raise and repair the battleships sunk at Pearl Harbor. Although the Arizona was a total loss, the others were ready for battle by 1944. Their first mission was to help make good on General MacArthur’s promise to return to the Philippines, as part of the Leyte invasion force. On Oct. 24, 1944, they were waiting in the Surigao Strait with orders to stop the southern pincer of a powerful Japanese counterattack intent on wiping out the vulnerable American beachhead on Leyte Island. By dawn the battleships had had their revenge. They did not just turn back the Japanese Fleet — they annihilated it. The ghosts of Pearl Harbor had arisen to exact a terrible vengeance on their enemy.

The attack on Pearl Harbor was a devastating day in this nation’s history, though only the first of many hard days to come before final victory. But one marvels at the sheer level of miscalculation that went into the attack. That the Japanese leaders failed to appreciate the difference between the two nations’ industrial potential is bad enough, but how did they so badly misjudge the will of the American people? Of course they were not the first, nor will they be the last, to make this error. In fact, Osama bin Laden made the same mistake. The question that should give us pause is: How many other nations’ leaders are making that same miscalculation today?

— Jim Lacey is professor of strategic studies at the Marine Corps War College. He is the author of the recently released The First Clash and Keep from All Thoughtful Men. The opinions in this article are entirely his own and do not represent those of the Department of Defense or any of its members.
Posted by jtf at 9:35 AM