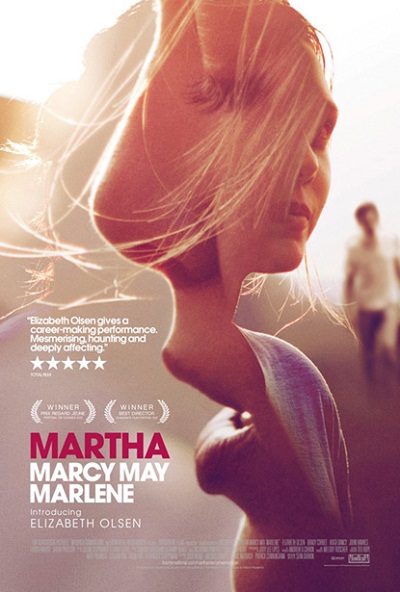 "Martha Marcy May Marlene." Say it real fast for a challenge. But take it in slowly to behold one of the most smashing breakout performances of the year.

Elizabeth Olsen delivers an utterly transfixing turn as the title character of this chilling psychological thriller, in which a young woman named Martha joins a cult and is rechristened "Marcy May" by the group's dangerously charismatic leader, a reed-thin rake named Patrick.

As for "Marlene" - well, that persona is best revealed by writer-director Sean Durkin, who makes a filmmaking debut every bit as compelling and assured as his leading lady. Shot in long, quiet takes of bucolic idylls, "Martha Marcy May Marlene" sneaks up on viewers with a barely perceptible sense of oncoming dread.

Structured mostly in flashbacks while Martha seeks to reunite with her estranged sister Lucy (Sarah Paulson), this is a story that's about a cult only in the most superficial sense. As Olsen's alternately recessive, spontaneous, blunt and vulnerable turn suggests, it's about a woman forging an identity in spite of the familial and pseudo-familial forces that never cease to exert their own destructive pulls.

Thankfully, Durkin doesn't resort to caricature in either world, whether it's Patrick's polygamous community of latter-day milkmaids or Lucy's bourgeois Connecticut lake house.

Portrayed by John Hawkes in a creepily seductive performance as a sexist schooled in New Age earnestness, Patrick can be as weirdly empowering as he is sadistic. "You're a teacher and a leader," he insists to Martha, playing on her insecurities with the expert touch of a master manipulator. Surrounding himself with adoring Aryan beauties, serenading them with his raw-boned warble, he's a kinder, gentler Charlie Manson, his pathology camouflaged behind communal nostrums. (Men eat before women in Patrick's community - but, hey, the produce is organic.)

If Durkin never quite explains Martha's story before she got to the farm, or her past relationship with Lucy, that barely matters in a film that's less a conventional narrative than a studied psychological portrait, whose probing rhythms and discreet observational style belie the seismic emotional activity under the serene surface.

In her subtle and nervily expressive turn as a woman coming undone, Olsen is a female analogue to Michael Shannon's disintegrating husband and father in the similarly disturbing "Take Shelter."

While she's conventionally beautiful (in case you haven't heard, she's Mary-Kate and Ashley's little sister), she possesses an open, unadorned face that allows feelings to emerge and recede with quicksilver mutability.

Just how Martha's reunion will play out with Lucy (and her impatient husband, played by Hugh Dancy) takes on the contours of a horror film in "Martha Marcy May Marlene," which, true to its art-house spirit, offers no easy answers to the audience it so skillfully hooks and reels in. If viewers aren't entirely certain how the story ends, they'll be haunted by Olsen's performance as an astonishingly accomplished beginning.