SIGNS OF THE TIMES


HAPPY WARRIOR from the June 20, 2011 issue of National Review
http://www.nationalreview.com 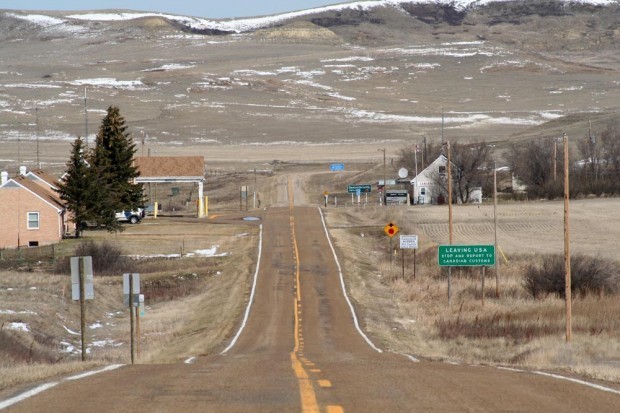 To be honest, I quite liked Obama’s “moat with alligators” crack. And, as it happens, the United States is building a moat on the border. The northern border, that is.

I’m not just referring to the literal trench the government has been digging along the 49th parallel, above which hover unmanned Predator drones keeping Americans safe from the Waziristan of the north. I’m talking about a kind of psychological moat. In the border towns of Derby Line, Vt., and Stanstead, Quebec, where the frontier runs through the middle of the Haskell Public Library and the Predator doubtless hovers over the Nonfiction A–M shelf, U.S. Customs and Border Protection has put barriers across residential streets and introduced a new “zero tolerance” policy.

Zero tolerance of what? Illegal immigration? Terrorism? Not at all. Be their guest. Instead, both Derby Liners and Stansteaders, with generations of cross-border marriage and commercial ties, now find that just going about their daily business is a national-security threat. Last year, the Derby Line pharmacist Buzzy Roy strolled a few yards up Church Street to buy a pizza on a Saturday night, as he has done on many an evening his entire life. When he returned, U.S. authorities charged him with illegally entering Canada, tossed him in the slammer, and fined him $500 — which he’s refusing to pay. “Local Man Jailed for Crossing Street,” as a Vermont paper reported it.

I’m always impressed by the federal government’s lack of proportion. When you’re the brokest nation in the history of the planet, it would help to be able to prioritize. But it’s understandable that, once you’ve gotten used to spending a fifth of a billion dollars every hour that you don’t have, it’s hard to stop. Under the Obama “stimulus,” another Vermont crossing at Morses Line was allocated $5 million for an upgrade that would have paid for eight lanes of traffic and a two-storey facility including a fitness center for CBP officials. In contrast to the Saturday-night pizza traffic in Derby Line, the Morses Line crossing averages two cars an hour. That would leave six lanes for CBP officials, weary of the fitness center, to bowl in. It would also require the confiscation of the Rainville family’s adjoining hayfield, forcing them to sell a family farm that would no longer be viable. Like Buzzy Roy, they fought back.

There were no plans to upgrade the Canadian port of entry. When the story broke, I thought you could hardly ask for a more poignant image of hyperpower bloat than Uncle Sam’s eight-lane two-storey CBP behemoth sitting opposite Her Canadian Majesty’s one-room shack. But Whitetail, Mont., went Morses Line, Vt., one better. The Whitetail border crossing sees fewer than five cars a day. So, naturally, the Washington spendaholics announced it would be getting an $8.5 million stimulus upgrade, the better to serve those 30 vehicles a week. Simultaneously, Ottawa noticed the crossing was attracting fewer than five cars a day. So they announced its closure. You can’t get more stimulating than an $8.5 million border crossing to nowhere. And surely there too is a poignant image of the West at twilight: an exit facility, but with nothing on the other side.

Why is Washington cracking down on all these Canadians? Janet Incompetano, the Homeland Security supremo, says it’s a celebrate-diversity thing: A light footprint on the northern border risks giving the unfortunate impression to our Mexican friends that Washington does not consider all foreigners to be equally sinister. As we’re often told, we need Mexicans to come here to do the jobs Americans won’t do. And we need Canadians to come here to hire Mexicans to do the jobs Americans won’t do. Even as CBP is barricading off Derby Line streets from Quebecois pizza, the village gas station is Canadian: Irving. South of the Vermont border, from Richford to Enosburg Falls to Swanton, the small-town bank is “America’s Most Convenient Bank®,” TD Bank — as in T for Toronto, D for Dominion. Every single dam along the Connecticut River is owned by TransCanada. A couple of years back, I ordered a woodstove from Vermont Castings, because its very name conjured something appealingly small-town and hand-crafted around which Howard Dean and I might while away long winter nights playing strip-plaid poker. But the authentic Vermonty stove arrived from Mississauga, Ontario, in a crate marked CFM Corp. Oh, well. Only the other day, Vermont’s biggest electric company was sold to some guy in Newfoundland. Or as the Valley News reported it: “CVPS Agrees to $700 Million Sale in Another Canadian Takeover.”

I wonder what all these Canadian banking, oil, and utility magnates make of the increased border scrutiny when they venture south to buy up a new subsidiary or two. Whenever I fly back from Bermuda to Boston — a trip one could have made with a mere driver’s license until a few years ago — the CBP agent takes a new photograph of me and another set of fingerprints. Occasionally, I wonder how many sets of Steyn fingerprints even the U.S. government needs. Perhaps one day, like those Andy Warhol images of Marilyn, there’ll be enough Steyn fingerprint sets to mount an exhibition at MoMA.

Yes, it’s difficult to reform the entitlements. But almost everywhere you stand in this great land there’s world-beating government waste staring you in the face. Crossing the border a few weeks back, I found myself at an intersection of two lightly traveled rural roads in upstate New York: There was a blinking red light, a “Stop” sign, a “Stop Sign Ahead” sign, and, for good measure, a left-side “Stop” sign, too. And, not for the first time, I reflected that that was four times as many traffic-control devices as one would see at a comparable junction almost anywhere in the developed world. There, too, is a sign of the times: A spendaholic nation has more and more “Stop” signs. Because we can’t stop.

Napolitano may make deal to keep both sides of Whitetail border crossing open -
http://missoulian.com/news/state-and-regional/article_aa44c4dc-b08d-11df-90dd-001cc4c002e0.html
Posted by jtf at 7:43 AM

The Zionist state is now an Apartheid State with a great population of second class people called Palestinians. The difference with this new conquest is that it has been financed and supported military by the the USA as a colonial project in Palestine. it has been a designer colonization. You can say that the might is right and that as long as the Zionists have the guns they will stay...but for how long? History has the ability to repeat itself and it will again according to Murphy's law.

Canada. Look it up.