No problem too big for an Obama speech 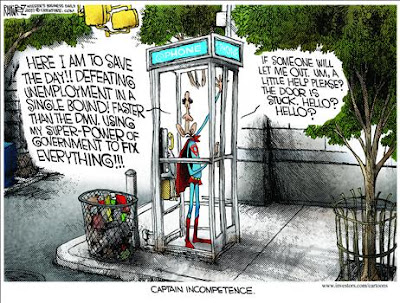 The Democrats seem to have given up on budgets. Hey, who can blame them? They've got a ballpark figure: Let's raise two trillion dollars in revenue every year, and then spend four trillion. That seems to work pretty well, so why get hung up on a lot of fine print? Harry Reid says the Senate has no plans to produce a budget, but in April the President did give a speech about "a new budget framework" that he said would save $4 trillion over the next 12 years.

That would be 2023, if you're minded to take him seriously. Paul Ryan, chairman of the House Budget Committee, did. Last week he asked Douglas Elmendorf, director of the Congressional Budget Office, if he'd "estimated the budget impact of this framework."

"No, Mr. Chairman," replied Director Elmendorf, deadpan. "We don't estimate speeches. We need much more specificity than was provided in that speech."

"We don't estimate speeches": There's an epitaph to chisel on the tombstone of the republic. Unfortunately for those of us on the receiving end, giving speeches is what Obama does. Indeed, having no other accomplishments to his name (as Hillary Clinton pointed out), giving speeches is what got the president his job. You remember – the stuff about "hope" and "change." Were the CBO in the business of "estimating speeches," they'd have run the numbers and concluded that, under the Obama plan, vague abstract nouns would be generating 87 percent of GDP by 2016.

For whatever reason, it didn't work out quite like that. But that's no reason not to give another speech. So, there he was the other night expounding on Afghanistan. Unlike Douglas Elmendorf, the Taliban do estimate speeches, and they correctly concluded from the president's 2009 speech that all they need to do is run out the clock, and all or most of the country will be theirs once more. Last week's update confirmed their estimate. "Winning" is not in Obama's vocabulary. Oh, wait. That's not true. In an earlier unestimated speech, he declared he was committed to "winning the future," "winning the future" at some unspecified time in the future being a lot easier than winning the war. In fairness, it's been two-thirds of a century since America has unambiguously won a war, but throughout that period most presidents were at least notionally committed to the possibility of victory. Obama seems to regard the very concept as something boorish and vulgar that would cause him embarrassment if it came up at dinner parties. So place your bets on how long it will be before Mullah Omar's back in town. And then ask yourself if America will have anything to show for its decade in Afghanistan that it wouldn't have had if it had just quit two weeks after toppling the Taliban in the fall of 2001 and left the mullahs, warlords, poppy barons and pederasts to have at each other without the distraction of extravagant NATO reconstruction projects littering their beautiful land of charmingly unspoilt rubble.

That's not how the president put it, of course. But then the delightful appeal of an Obama speech is the ever wider gulf between Speechworld and Reality. So in this instance he framed our retreat from the Hindu Kush as an excellent opportunity to stop wasting money overseas and start wasting even more in Washington. Or in his words:

"America, it is time to focus on nation-building here at home."

Gee, thanks. If America were a Kandahar wedding, that would be the cue to fire your rifle in the air and grab the cutest 9-year old boy. Naturally, not everyone sees eye to eye. Like Afghanistan, ours is a fractious land. But as Obama said:

"Our nation draws strength from our differences, and when our union is strong no hill is too steep, no horizon is beyond our reach."

Are you sure we can afford ev'ry stream? Yes, it's far less rugged than it sounds. In compliance with EPA regulations, no real hills and dales were harmed in the making of this glib rhetorical imagery.

"At his best," wrote The New York Times of Obama's speech, "the president can be highly persuasive."

Er, if you say so. He's mostly persuasive in persuading you there's no urgency about anything: All that stuff about Americans sweating and straining for the most distant horizon is his way of saying you can go back to sleep for another couple of decades.

If we hadn't been assured by The New York Times that this man is the Greatest Orator of All Time, there would be something offensive in the leader of the Brokest Nation in History bragging that we're not the guys to shirk a challenge, however grueling and demanding it may be, no sirree. The salient feature of America in the Age of Obama is a failed government class institutionally committed to living beyond its means, and a citizenry too many of whom are content to string along. Remember Peggy Joseph of Sarasota, Florida? "I never thought this day would ever happen," she gushed after an Obama rally in 2008. "I won't have to worry about putting gas in my car. I won't have to worry about paying my mortgage." Is Peggy really the gal you'd want to hike a steep hill with?

In Speechworld, nation-building can be done through flatulent rhetoric. In Realworld, nations are built by people, and in America the productive class is battered and reeling. Obama wasted a trillion dollars on a phony stimulus that stimulated nothing but government, and wants to try it one mo' time. That's what yokes "nation-building" near and far. According to the World Bank, the Western military/aid presence now accounts for 97 percent of Afghanistan's GDP. The bit that's left doesn't function, not least because it doesn't need to. How can, say, Helmand develop an economic base when everybody with a whit of sense is making massively inflated salaries as a translator for the Yanks or a security guard for some EU outreach project? When the 97 percent revenue tide recedes with the American withdrawal, what's left will be the same old 3 percent ugly tribal dump Afghanistan was a decade ago. It will leave as little trace as the Obama stimulus.

The sheer waste is appalling, immoral and deeply destructive. In Kandahar as in California, all that matters is excess: It's not working? Then you need to spend more. More more more. What does it matter? You're not spending anything real. America would have to find 15 trillion dollars just to get back to having nothing in its pocket. But who cares? As long as we're united in our commitment to excess, no CBO debt-GDP ratio graph is too steep for us to take to the next level, and no horizon – 2060, 2080, 2104 – is too distant to serve as a plausible estimate for significant deficit reduction.

In Realworld, political speeches would be about closing down unnecessary federal bureaucracies, dramatically downsizing or merging others, and ending make-work projects and mission creep. The culture of excess that distinguishes the hyperpower at twilight would be reviled at every turn. But instead the "highly persuasive" orator declares that there's nothing to worry about that even more government can't cure. In Speechworld, "no hill is too steep, no horizon is beyond our reach." In Realworld, that's mainly because we're going downhill. And the horizon is a cliff edge.