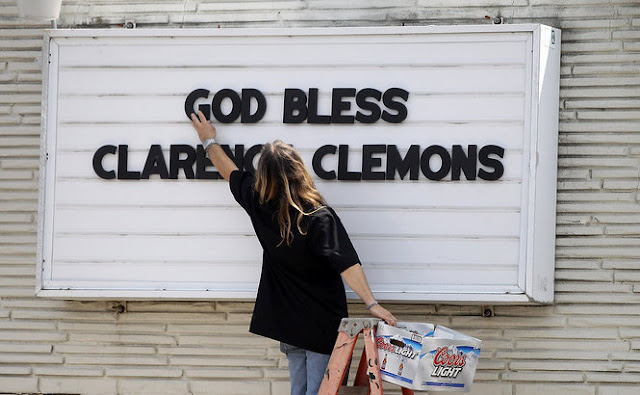 "Sometimes it seemed you could hear the whole damn city crying," sings Bruce Springsteen, in "Backstreets." That’s the way it felt over the weekend — except it wasn’t the city, it was the world — as news spread about the Saturday night death of E Street Band saxophonist Clarence Clemons.

Near the end of U2’s Saturday show in Anaheim, Calif., Bono praised "the beautiful symphonic sound" of Clarence Clemons’ saxophone, and said of the Big Man: "This man just carried music, and music carried him, until this day." Pearl Jam frontman Eddie Vedder, performing solo in Hartford, Conn., dedicated the song "Better Man" to Clemons.

These were possibly the first two public tributes to Clemons, who died at age 69 due to complications from the stroke he suffered on June 12. There were at least two more yesterday. At the Stone Pony in Asbury Park, fans gathered to reminisce, listen to music, and pay their respects. And at a concert in Denmark, Bon Jovi played "Tenth Avenue Freeze-out."

Surely the tributes are just starting. Few if any musicians were more universally loved than the Big Man. And it’s hard to think of another musician, except maybe Springsteen himself, whose death would affect so many fans — and particularly, of course, New Jerseyans — so deeply.

"Clarence Clemons represented the soul and spirit of New Jersey," said Gov. Chris Christie, in a statement. "His partnership with Bruce Springsteen and the rest of the E Street Band brought great pride to our state and joy to every fan of this music around the world.

"On a personal note, when I heard about the Big Man’s passing on Saturday night, I was struck with an overwhelming feeling that the days of my youth were now finally over."

Norman Seldin, who played with Clemons (in Clemons’ pre-E Street days) in the Shore band, Norman Seldin and the Joyful Noyze, said that when he heard the news on Saturday, "I cried like a baby, for hours. I don’t believe he’s not here anymore. It’s numbing."

Eddie Manion, longtime saxophonist for Southside Johnny and the Asbury Jukes and an occasional Springsteen collaborator, said "I couldn’t stop the tears from coming" when the news came, before a Jukes show in Connecticut.

Clemons was a friend of Manion’s, as well as a musical role model. "You’d do a recording session and they would say, ‘Just sound like Clarence Clemons,’ " he said. "But you couldn’t. Nobody could sound like that. He had a sound of his own, and that’s what made him great." 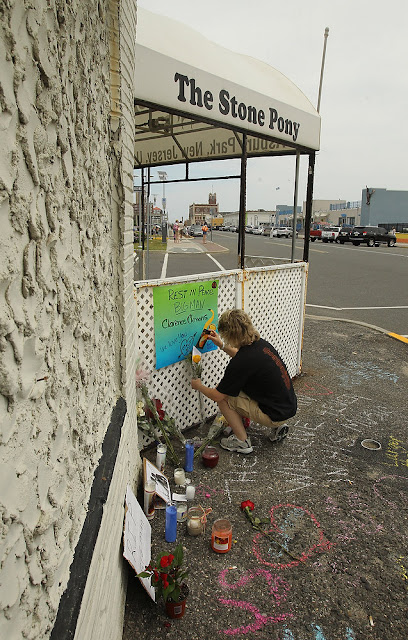 Debra Winter of Lyndhurst leaves flowers at a memorial outside the Stone Pony the day after Clarence Clemons died. (John O'Boyle/The Star-Ledger)

Many musicians, from all corners of the industry, mourned Clemons’ death via Twitter.

"Clarence Clemons was a wonderful talent. He will be on my mind tonight," wrote Janet Jackson.

Springsteen posted a message on his website Saturday night. "Clarence lived a wonderful life," Springsteen wrote." "He carried within him a love of people that made them love him. He created a wondrous and extended family. He loved the saxophone, loved our fans and gave everything he had every night he stepped on stage. His loss is immeasurable and we are honored and thankful to have known him and had the opportunity to stand beside him for nearly forty years."

Seldin described Clemons as "a person who could turn no one down if that person needed something, and a professional who never left any kind of recording or show — whether it was for charity or money — until everything was done right."

Seldin said Clemons was "more religious than people understand," and that his backstage dressing rooms at shows, which he dubbed his Temple of Soul," "was really a temple of prayer. It wasn’t one of these rock ’n’ roll rooms you’d walk into, with groupies and stuff. It was very select."

Seldin attended a 2009 E Street show at Madison Square Garden in New York, at Clemons’ invitation. "Every part of the guy hurt," Seldin said, referring to Clemons’ multiple health problems (knees, hips, back, heart). Seldin wondered how he would be able to perform.

"He said, ‘I’ll get through this. God gets me through it.’ And he went out and did one hell of a show."

Clemons’ richly textured saxophone was so integral to the sound of the E Street Band and his larger-than-life presence was such a central element in the band’s stage show that it’s hard to wrap your head around the concept of the group continuing without him.

But the band has endured countless lineup changes over the years. And the 2008 loss of another original member — keyboardist Danny Federici, who died of cancer — did not put an end to it.

It’s too early to say whether the band will continue in any form. It doesn’t even feel right to think about it. Yet it must be noted that the last two sentences of Springsteen’s online message seem to leave the door open for that to happen: "He was my great friend, my partner, and with Clarence at my side, my band and I were able to tell a story far deeper than those simply contained in our music. His life, his memory, and his love will live on in that story and in our band."

Life does go on, and the band may live to rock another day. But it would be a different band — with the same name, maybe, but a different sound, and a different personality.

The E Street Band may eventually present joyful shows again. But there will be an inescapable sadness whenever your eyes wander to the part of the stage where Clemons always stood. The Big Man’s stamp was simply that big.