The Big Man, Much More Than Springsteen’s Sideman 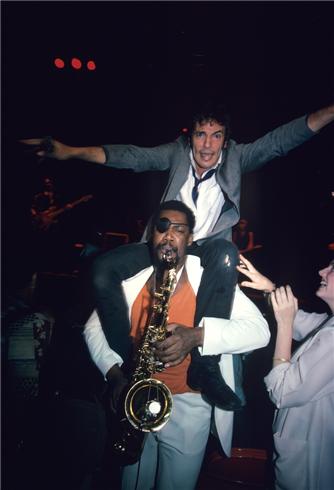 It was never just about the saxophone. In more than three decades wielding his tenor sax with Bruce Springsteen’s E Street Band, from its beginning in 1972 to his death at 69 on Saturday, Clarence Clemons was as much a symbol as a sideman.

He played an essential role in Mr. Springsteen’s songs, particularly in the E Street Band’s first years. Mid-1970s songs like “Jungleland,” “Incident on 57th Street” and “Rosalita (Come Out Tonight)” stretched out like suites, and in their instrumental interludes Mr. Clemons’s saxophone parts testified to wordless yearning, to determined striving and to comical gumption. Even after Mr. Springsteen chose to write shorter, pop-structured songs, making concision his new discipline, Mr. Clemons held his place: as the honking foundation of “Hungry Heart” and the longed-for dance partner in “Dancing in the Dark.”

His meaty tone was the legacy of his main model, King Curtis, and of the countless lesser-known honkers, shouters and squealers who pumped out riffs and took eight-bar solos in 1940s and ’50s jump blues, R&B and doo-wop. His lung power forged the E Street Band’s most visceral connection with those African-American rock ’n’ roll roots, one that was already nostalgic even in the ’70s. Recently, when Mr. Clemons made a valedictory appearance in Lady Gaga’s “Edge of Glory,” his sound paid tribute to his own younger self from nearly 40 years ago.

But in a band that constantly proved itself on the road, from Asbury Park club gigs to its decades of headlining arenas, Mr. Clemons’s presence was always as significant as his sound. He was, in his resonantly matter-of-fact nickname, the Big Man, 6 feet 4 inches and built like the football player he might have been but for knee troubles. He was by far the E Street Band’s flashiest dresser, in eye-popping suits and broad-brimmed hats; Mr. Springsteen gleefully let himself be upstaged by a sideman he’d never place in the background. They were by all accounts dear friends, even soulmates; Mr. Clemons often described their relationship as nothing less than love (but of a nonsexual kind). Onstage, with thousands of spectators, Mr. Springsteen would bow at his feet or hold him in a close hug, presenting him as a muse, not an employee.

Of course Mr. Clemons was the band’s abiding African-American musician, who kept the E Street Band multiracial after the early departure of a keyboardist, David Sancious, also African-American. Along with the sound his saxophone brought to the songs — of soul and R&B, of urban sophistication and wildness — Mr. Clemons’s imposing figure declared that the E Street Band was sharing rock ’n’ roll’s black heritage, not plundering it. In America’s long, vexed cultural history of race, his bond with Mr. Springsteen made Mr. Clemons a symbol of unity and reconciliation.

Ever conscious of iconography, especially on “Born to Run,” the album that was to be his unabashed, arduously recorded attempt at rock greatness, Mr. Springsteen didn’t lightly choose its cover image. It shows him leaning on a shoulder that, when the album is unfolded, belongs to Mr. Clemons. (Mr. Springsteen was standing on something, since Mr. Clemons was a head taller.) Mr. Springsteen is smiling, watching, listening as Mr. Clemons plays his saxophone, the way he had listened to and synthesized so much of rock ’n’ roll’s past. The attentive grin on Mr. Springsteen’s face suggests that he’s learning some deeply pleasurable secret; the openness and determination in Mr. Clemons’s eyes, gleaming out of deep shadows, show he is proud to hand it on to his friend.
Posted by jtf at 10:42 PM