How the Democrats nearly destroyed the economy.


History will be kind to me, for I intend to write it. — Winston Churchill

There is history — a chronicle of human events — and then there is perceived history. So often, the two are wildly at odds.

In 1963, a popular Democratic president was assassinated by a Marxist named Oswald, who had actually defected to the Soviet Union and returned to the U.S. with a Soviet wife, was an active member of the Fair Play for Cuba Committee, and had attempted to assassinate a right-wing general named Edwin Walker earlier in the year.

Yet those who write history found these facts inconvenient. They created a different history in which the “atmosphere of hate” in the southern city of Dallas, Texas, led to terrible political violence. In other words, it was political conservatism that led to Kennedy’s assassination. This perceived history was recycled as recently as the shooting of Rep. Gabrielle Giffords. ABC’s Christiane Amanpour, interviewing Jean Kennedy Smith, noted that the Kennedy assassination was “eerily relevant” and asked Kennedy to evaluate the “political atmosphere” in the country today.

Starting just a few years after the Kennedy assassination, American liberals began to consider anti-Communism a kind of mental disorder. Hostility to Communism was akin to racism, sexism, and other character flaws. Reagan’s description of the Soviet Union as an “evil empire” cemented liberal suspicions that Reagan was a dangerous buffoon. Yet starting in 1989, when the Berlin Wall fell, liberals began to find their anti-anti-Communism embarrassing. And so they created a perceived history — one in which the Cold War was a time of consensus, a time when, as former senator Bill Bradley put it, “We knew where we stood on foreign policy.” 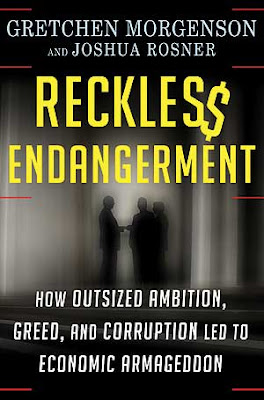 More recently we’ve witnessed the creation of a new historical narrative about the financial crisis of 2008. The perceived history, eagerly peddled by liberals and Democrats, is that the crash of 2008 was the result of Wall Street’s greed. It was unregulated capitalism that brought us to the brink of financial meltdown, the Democrats insisted. And they codified their manufactured history into a law, the Dodd-Frank Act, that completely avoided the true problem.

It’s both surprising and gratifying therefore to report that a great revisionist history has just been published by none other than a New York Times reporter, Gretchen Morgenson, and a financial analyst, Joshua Rosner.

In Reckless Endangerment, Morgenson and Rosner offer considerable censure for reckless bankers, lax rating agencies, captured regulators, and unscrupulous businessmen. But the greatest responsibility for the collapse of the housing market and the near “Armageddon” of the American economy belongs to Fannie Mae and Freddie Mac and to the politicians who created and protected them. With a couple of prominent exceptions, the politicians were Democrats claiming to do good for the poor. Along the way, they enriched themselves and their friends, stuffed their campaign coffers, and resisted all attempts to enforce market discipline. When the inevitable collapse arrived, the entire economy suffered, but no one more than the poor.

Jim Johnson, advisor to Walter Mondale and John Kerry, amassed a personal fortune estimated at $100 million during his nine years as CEO of Fannie Mae. “Under Johnson,” Morgenson and Rosner write, “Fannie Mae led the way in encouraging loose lending practices among the banks whose loans the company bought. A Pied Piper of the financial sector, Johnson led both the private and public sectors down a path that led directly to the credit crisis of 2008.”

Reckless Endangerment includes the Clinton administration’s contribution to the home-ownership catastrophe. Clinton had claimed that dramatically increasing homeownership would boost the economy; instead, “in just a few short years, all of the venerable rules governing the relationship between borrower and lender went out the window, starting with . . . the requirement that a borrower put down a substantial amount of cash in a property, verify his income, and demonstrate an ability to service his debts.”

Reckless Endangerment utterly deflates the perceived history of the 2008 crash. Yes, there was greed — when is there not? But it was government distortions of markets — not “unregulated capitalism” — that led the economy to disaster.

— Mona Charen is a nationally syndicated columnist. © 2011 Creators Syndicate, Inc.
Posted by jtf at 9:10 AM