Sorry, but LeBron's a lost cause 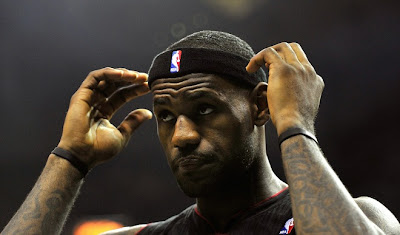 This column was going to be a plea for LeBron James to apologize to Cleveland fans for the classless way he exited the city.

An apology in the hours before Thursday’s Heat-Cavs tipoff would douse some of the animosity sure to fill Quicken Loans Arena.

An apology would relieve some of the stress on a Heat team totally uncomfortable with playing the role of villain, of being the team America loves to hate.

An apology would serve James’ image well, allowing his objective critics to move on.

But I give up. LeBron James looks, feels and sounds like a lost cause today, a millionaire celebrity incapable of reaching rock bottom, self-reflection or uttering an ounce of remorse.

Talent in the kind of abundance James is blessed with is a curse. It seduces the owner into believing his flaws are his strengths.

I once knew a Pro Bowl NFL receiver who believed being high on marijuana during practice and games was the key to his success. He said he’d been playing and practicing high since high school. He had no idea his reliance on marijuana was the main reason he’d never be a Hall of Fame receiver, and that’s not to suggest there are no recreational drug users in the Pro Football Hall of Fame.

Lawrence Taylor was so gifted it never mattered what he did before kickoff; putting on a uniform 16 Sundays a year was as responsible as LT needed to be.

Nope. He’s more talented, the game comes easier to LeBron. He can excel in the NBA without ever submitting to coaching. He can earn lifetime financial security without ever attending college or grinding at the bottom of the corporate ladder. He can win friends and be popular with women without ever demonstrating humility or showing respect.

You wonder why Big Ben Roethlisberger tried to have sex with a college student inside a nightclub closet/bathroom? Probably because he had before. People do what works. If bad habits get rewarded, people never interpret them as bad habits.

LeBron James bullies the coaches who dare to coach him, who dare to try to define for him the sacrifices necessary for true greatness.

According to an ESPN story, the Heat players, particularly LeBron, are bothered that Erik Spoelstra is demanding that LeBron conduct himself in a more professional demeanor. Spoelstra has committed the felonious crime of yelling at LeBron in front of his teammates. Spoelstra won’t let LeBron be LeBron the way a parent won’t let a child be an unbathed child day after day.

The story appears to be intentionally leaked by members of Team LeBron -- the clueless group that brought you The Decision — to undermine Spoelstra. In reality, it undermines James.

That’s why I give up.

The people surrounding and advising James are just as devoid of mature perspective as James. They’ve been blessed with a gift (James) so talented they can’t recognize their flaws, either. Their flaws, in their minds, have no real consequences, especially none that can’t be explained away by racism or “haterade.”

It’s the blind leading the blind. Unless one of them talks James into financing a dogfighting ring, it’s highly unlikely James will ever snap out of his cluelessness.

Seriously, that’s what it took for us to see the best of Michael Vick, another once-in-a-generation talent who never approached his potential until he sat behind bars for 19 months.

I have no interest in seeing LeBron James go to prison.

So I give up. I’m just going to accept his immaturity and stubbornness and bullying. He’s an immense talent I’ll never fully enjoy or appreciate. I’ll tune in Thursday night and root for the Cavaliers.

James is a lost cause. He’ll never man up and apologize. His bank account says he doesn’t have to. His friends say he shouldn’t. His coworkers and peers, besides Spoelstra, are too fearful to tell James what they really think. He’s a bully. Team LeBron’s next media leak could be about how Chris Bosh needs to be traded or Dwyane Wade must shoot less.

King Blames must be made happy in order for the Heat to reach their potential. The Little Diaper won Ohio state championships when everyone catered to his needs.

King Blames can’t hear us. Not any of us who ask him to rule the basketball world with grace, class, fairness and eye toward greatness. We don’t need him. And he doesn’t need us.

E-mail Jason or follow him on Twitter. Media requests for Mr. Whitlock should be directed to Fox Sports PR.


King James wants Spoelstra to bow to him 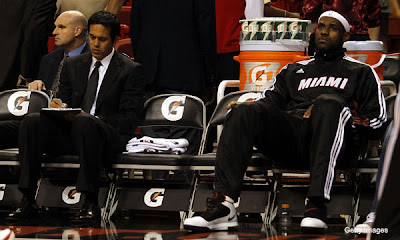 Erik Spoelstra reached out to Mike Brown over the summer and searched for insight into both basketball’s blessing and curse: Coaching the two-time MVP LeBron James.

Over and over, Brown uprooted his offensive system to appease James only to have it never work. Brown praised James’ character publicly when he would’ve preferred to have been truthful about James’ narcissism. James defied Brown in public and private, disregarded his play calls to freelance his offense, and belittled him without consequence within the Cleveland Cavaliers.

Meticulous in his preparation, Spoelstra spoke with several past coaches, and league sources said a clear and unequivocal picture appeared on how to proceed: End the cycle of enabling with James and hold him accountable.

And surprise, surprise: LeBron James has responded with a test of his own organizational strength, pushing to see how far the Heat will bend to his will. This season, James is hearing a word seldom uttered to him in Cleveland: “No.” And it keeps coming out of the coach’s mouth, keeps getting between the King and what he wants.

Can I stay overnight to party in New Orleans after a preseason game?

Can I play the clown in practice?

Can I get out of playing point guard?

Even within a month of the season’s sideways 9-8 start, the NBA witnessed a predictable play out of the James-Maverick Carter playbook on Monday morning. They planted a story and exposed themselves again as jokers of the highest order. [1] They care so little about anyone but themselves. Still, no one’s surprised that they’d stoop so low, so fast into this supposed historic 73-victory season and NBA Finals sweep of the Los Angeles Lakers. They want Spoelstra – and Pat Riley – to bend to them, to bow to the King the way everyone has before them.

Nevertheless, here’s what was surprising – even troubling – when the Heat talked on Monday before a victory over the Washington Wizards: In the blink of an eye, Dwyane Wade signed up with Team LeBron to scapegoat and sell out Spoelstra.

Wade’s always been loyal, and that’s why it was so surprising to witness him bail this fast on Spoelstra, whom Wade knows too well. Spoelstra is a good NBA coach. Everyone knows that Wade isn’t a star who plays hard all the time, knows that he takes plays off on defense. They know that Spoelstra did a terrific job coaching 90 victories out of that flawed Miami roster the previous two seasons.

As much as ever, the Heat need Wade to influence James. Only now, it’s clear James is influencing Wade. With Udonis Haslem out for the regular season, the locker room misses one of its vital voices. Now, Wade is struggling on the floor and James is the devil on his shoulder, whispering that he doesn’t need to be accountable, that there’s an easy fall guy for everyone: Spoelstra.

Those who know Wade well, who care about him, were disappointed Monday. When Spoelstra needed Wade to stand up for him, Wade never shrunk so small. Spoelstra was Wade’s guy, but Wade’s finding it much easier to align himself with James’ coward act than do the right thing. This was something that you’d expect out of Chris Bosh, who’s never been a leader, never a winner, but Wade?

“He knows better than this,” one of Wade’s former assistant coaches said. “I’m not saying he hasn’t changed some, but he knows right from wrong. And this is wrong.”

The fundamental problem for Spoelstra isn’t that James doesn’t respect coaches – he doesn’t respect people. Give LeBron this, though: He’s learned to live one way with the television light on, and another with it off. He treats everyone like a servant, because that’s what the system taught him as a teenage prodigy. To James, the coach isn’t there to mold him into the team dynamic. He’s there to serve him.

Wade was one of the Team USA players who’d watch incredulously as James would throw a bowl of fries back at a renowned chef and bark, “They’re cold!” Or throw his sweaty practice jersey across the court and command a team administrator to go pick it up. Everyone wants James to grow out of it, but he’s never showed much of an inclination for self-examination and improvement. And he’s never surrounded himself with people who’d push him to do so.

What’s more, the timing of this leak was no accident, because James and his business manager had to like the idea of someone else going on trial this week. When the public wanted to talk about James’ return to Cleveland, about the callous way with which he left, about the disjointed start in Miami, they thrust everything onto Spoelstra.

After all, the coach had it coming to him. Of this, LeBron James was sure. Spoelstra had the audacity to do something that Mike Brown never had ownership’s backing to do in Cleveland: To push James, call him out, coach him.

The funniest part had to be how they leaked the idea that Erik Spoelstra was panicking now, behaving like he feared for his job. Truth be told, he’s been behaving in the opposite way. Spoelstra isn’t running from LeBron, but running at him.

Someone’s scared here, but it isn’t the coach.

http://sports.yahoo.com/nba/blog/ball_dont_lie/post/Relationship-between-LeBron-and-coach-gets-chill?urn=nba-290079
Posted by jtf at 1:41 PM