By George F. Will
The Washington Post
http://www.washingtonpost.com
Thursday, December 2, 2010 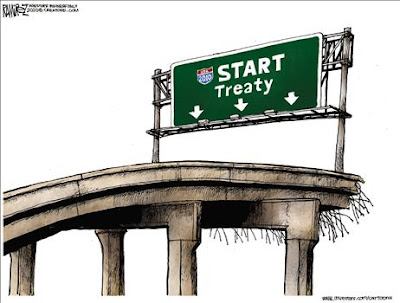 The Framers of the Constitution, a nuisance regretted by most modern presidents, gave the legislative branch - another indignity inflicted on presidents, as they see it - an important role in making foreign policy. The Framers did so by, among other provisions, requiring the consent of two-thirds of the Senate (today, 67 votes) to treaties. The Framers' wisdom is confirmed by Barack Obama's impatience with senators reluctant to ratify, during Congress's lame-duck session, the New START treaty pertaining to Russia's nuclear weapons.

The administration's ardor for ratification is understandable, as is Russia's. The president needs a success somewhere; Russia needs psychotherapy. It longs to be treated as what it no longer is, a superpower, and it likes the treaty's asymmetries.

It is more reasonable to worry about the security of Russia's weapons than about their numbers. New START, however, pertains primarily to the numbers. It requires the reduction of strategic weapons and launchers. Concerning the former, Russia's economic anemia is already forcing it into arms reductions. Concerning the latter, Russia already is below the levels the treaty would impose on America.

Deeply informed and rationally skeptical, Sen. Jon Kyl (R-Ariz.) is arguing from the position of increased strength created on Nov. 2: Come January, there will be six more Republican senators. He implicitly - and lucidly - treats Russia itself as of secondary importance in the treaty. He is using his enhanced leverage primarily to increase the administration's commitment to modernization of the U.S. nuclear arsenal: All nuclear weapons decay, and no U.S. weapon has been tested since 1992.

"All the lab folks will tell you" modernization is imperative, Kyl said in a telephone interview Monday. Which may be why, he said, "for significant periods of time" Republican senators were "denied meaningful contact" with weapons laboratory scientists.

The administration contends that even delaying ratification will reduce Russia's helpfulness regarding Iran's nuclear weapons program. This suggests, strangely, that Russia has been significantly helpful. And it assumes, implausibly, that Russia's interest in preventing neighboring Iran from having nuclear weapons is less than its interest in modifying the strategic arms balance with an America that is no longer a strategic adversary. Defense Secretary Robert Gates says Russia is no military threat to America or America's allies.

The administration says ratification is urgent to reinstall verification. But when the previous treaty expired last December, Obama and Russian President Dmitry Medvedev said they would continue "in the spirit of" the expired treaty. If verification is suddenly increasingly important, is Russia decreasingly trustworthy?

When nations are enemies, they use arms negotiations less to mutually limit arms than to channel arms competition in strategically advantageous directions. So real arms control is impossible until it is unimportant. Until, that is, dangers disappear. So, ratification of New START is possible. But to call it urgent is silly; to call it advisable would be premature, pending completion of the Senate's advise-and-consent role, which should include clarifying stipulations in any ratifying resolution.

At Russia's insistence, the treaty contains language that some Republicans think does - and the Obama administration insists does not - couple limits on offensive and defensive systems. If it does, Republicans should oppose New START; if the language is, as the administration says, without force, it should be deleted. The Senate made ratification of the Jay Treaty (1795) and the Panama Canal Treaty (1978) contingent on modifying some language.

The impertinence of mere senators modifying their handiwork will scandalize the Cold War arms control clerisy, who are still with us. These custodians of humanity's salvation, these speakers of an argot (SLBMs, ICBMs, MIRVs, etc.) more arcane to the laity than Latin was to 14th-century peasants, are marvelously unimpressed by the events of 1991. If, when the Soviet Union disappeared, Russia had disintegrated until only the Moscow metropolitan area remained, the clerisy would be earnestly negotiating arms agreements with that city's police force.

In this era of astonishing emerging markets such as China, India and Brazil, Russia is a perverse miracle of arrested development. It is receding because it still has an essentially hunter-gatherer economy, based on extraction industries (oil, gas, minerals). Aside from vodka, what Russian-manufactured export matters? Don't say caviar; it is extracted from sturgeon.

America's domestic policy is bedeviled by reactionary liberalism, whose adherents resist any diminution of any entitlement. Barack Obama's tumble into a time warp - his overinvestment in an arms agreement with the emaciated Russian bear - proves that reactionary liberalism does not end at the water's edge.
Posted by jtf at 7:49 AM

Email ThisBlogThis!Share to TwitterShare to FacebookShare to Pinterest
Labels: George Will, Russia/Soviet Union