The Confused Morality of WikiLeaks 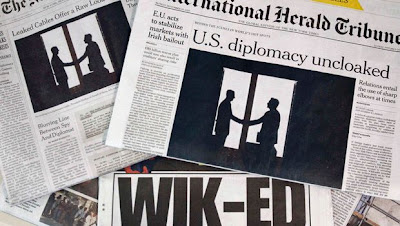 The latest WikiLeaks trove raises once more the following two issues — the circumstances of the release of classified documents and their contents. We won’t know the full extent of the diplomatic archives for days, but so far the particulars seem as embarrassing as they are underwhelming.

We are told that the Obama administration by hook or crook wanted to close Guantanamo, that occasionally U.S. diplomats spy, that Pakistan is unstable, that Saudi Arabia is duplicitous in wanting America to bell the Iranian nuclear cat while their elites subsidize al-Qaeda, that we are planning for the eventuality of North Korea’s fall, that China conspires against Google, that Libya’s Gaddafi had a hot blonde “nurse” with him, that the U.S. military was critical of the Brits, that the Royal Family is sometimes naughty, and all number of other things we would expect diplomatic missions to hear, gossip, editorialize, and intrigue about — and which usually find their way into the mainstream press sooner or later.

The danger of releasing these confidential diplomatic cables, then, is probably not their content per se but the destruction of the trust and reputations of many American diplomats who on future occasions, in far more critical contexts, will lament the loss of their access, friendships and credibility.

Second, the how, why, and when of the leak of over 250,000 diplomatic communications raises fundamental, worrisome, and even ironic issues. For instance, how in the world does one Pfc. Bradley Manning, the alleged twentysomething Army leaker, become an “intelligence analyst” (e.g., how long does one have to be in the army, what sort of education is requisite, and what prior skills must be demonstrable) with access to the private correspondence of the top echelon of the American diplomatic corps? That the young private Manning was even near a computer with such confidential material is insane.

Under Bush, press discussion of leaks focused on their embarrassing contents (after all, it was supposedly a higher calling that made brave whistle-blowers release confidential communications emanating from the Bush-Cheney right-wing nexus). In contrast, the press now seems more interested in responses of “How dare they” to the WikiLeaks methodology — as in, how could one be allowed to break laws and leak things from the Obamian State Department, if doing so might harm liberal diplomats, human-rights activists, etc., and embarrass a progressive government?

So, should we laugh or cry that State Department legal eagle Harold Koh is now using the powers of his new office (quite rightly) to remind leakers of the harm that they do to the operations of the U.S. government? The Bush-era author of “Can the President Be Torturer in Chief?” is now writing briefs explaining why the Obama administration’s use of judge/jury/executioner Predator drones against suspected terrorists (and anyone who goes up in smoke in their vicinity) is sanctioned by U.S. law. (I’d prefer to be waterboarded at Guantanamo by live questioning inquisitors than blown up by a no-questions-asked robot in Waziristan.)

Finally, Julian Assange is worse than a fraud, he is an abject hypocrite. Unilaterally he establishes supposed moral guidelines that determine the nature of his disclosures, but provides no proof that the enemies of, say, exposed Afghan and Iraqi civilian informants will not seek deadly retribution. And, of course, Assange would not wish to see published the private e-mail, telephone transcripts, and internal discussions of the WikiLeaks board, though these would give us the neccessary “context” to form opinions about the motivations and methodology of such leaks. Much less would Assange like someone to leak the complete confidential judicial proceedings against him by the Swedish government, which has now issued a warrant for his arrest on sexual coercion and molestation charges. In short, once Assange destroys the protocols of confidentiality, there is no such refuge for anyone — himself especially.

And why should Assange limit himself largely to Europe and the United States? As he jets about the secure Western world disclosing to free presses the secrets of Western military and diplomatic services, he might ponder whether he would like to move on to a new career working with Iranian, Russian, Chinese, Syrian, and Hezbollah dissidents who could help him expose the far more lethal and dangerous covert activities of their authoritarian governments.