Ralph Houk, a third-string catcher for the Yankees who went on to win three straight American League pennants and two World Series championships in his first seasons as their manager, died Wednesday at his home in Winter Haven, Fla. He was 90.

His death — coming soon after the deaths of George Steinbrenner, the principal owner of the Yankees, and Bob Sheppard, the team’s former public address announcer — was announced by his daughter, Donna Slaboden. 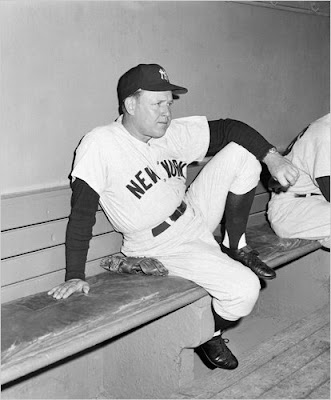 Ralph Houk, awaiting a game in 1966, won a Silver Star in World War II and was known in baseball as the Major.

As he got ready to manage in a World Series game for the first time, against the Cincinnati Reds in 1961, Houk was asked if he was nervous. “Why, is somebody going to be shooting at me?” he replied, according to “The Man in the Dugout” (Crown, 1992) by Leonard Koppett.

Houk had displayed his courage as an armored corps officer in World War II, winning the Silver Star. Upon returning to baseball, he was known as the Major, a tribute to his commanding presence, whatever the uniform.

When he became manager of the Yankees in October 1960, Houk stepped into a pressure-filled situation: he was replacing a man who had won 10 pennants and 7 World Series.

“There’s only one Casey Stengel,” he said. “I’m Ralph Houk.”

Managing for 20 seasons — with the Yankees, the Detroit Tigers and the Boston Red Sox — Houk’s strong point was building the morale and confidence of his players with an optimistic outlook and a refusal to criticize them publicly.

“I don’t think you can humiliate a player and expect him to perform,” he said.

After playing in the minors for three seasons, he enlisted in the Army as a private but received a lieutenant’s commission after officer candidate school.

He took part in the invasion of Normandy in June 1944 and the Battle of the Bulge that December, when he received the Silver Star for exposing himself to enemy fire as he drove off German tanks near a village in Luxembourg. When he was discharged as a major at war’s end, Houk took home a souvenir: a helmet he wore at Omaha Beach with holes in the front and back, a bullet having narrowly missed his skull.

In his first game with the Yankees, on April 26, 1947, Houk got three hits against the Washington Senators, and he went on to hit .272 in 41 games. That was his best season. With Yogi Berra en route to the Hall of Fame as the Yankees’ catcher, Houk appeared in only 91 games and had 158 at-bats over eight seasons, never hitting a home run.

He spent most of his time in the bullpen.

“I used to sit out there with pitchers who weren’t in the starting rotation, and I learned exactly what went through their minds,” Houk once told the sportswriter Lee Allen. 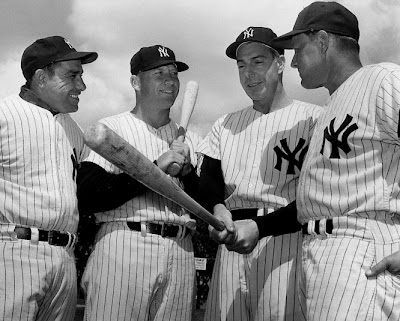 In 1955, Houk was named manager of the Yankees’ top minor league team, the Denver Bears of the American Association. In three years at Denver, he managed such future Yankees as Tony Kubek, Bobby Richardson, Don Larsen and Johnny Blanchard.

After the Yankees lost the 1960 World Series to the Pittsburgh Pirates, Stengel was forced out, at age 70, in favor of Houk, and General Manager George Weiss was replaced by his aide, Roy Hamey.

Houk made his debut as manager in an epic season: Roger Maris hit 61 home runs to break Babe Ruth’s record. The Yankees defeated the Reds in a five-game World Series, then captured the Series again in 1962, beating the San Francisco Giants in seven games. They repeated as pennant winners in 1963, but were swept by the Los Angeles Dodgers in the Series.

Houk and Hughie Jennings, who managed the Tigers to American League pennants from 1907 to 1909, are the only managers to finish in first place in each of their first three seasons.

After the 1963 season, Hamey retired because of health problems, Houk was elevated to general manager and Berra was named manager. The Yankees won the pennant again in 1964, but lost to the St. Louis Cardinals in seven games in the World Series.

Berra, never having enjoyed the players’ respect the way Houk had, was fired after the 1964 season and replaced by Johnny Keane, who had managed the Cardinals to the Series championship and then quit.

The Yankees’ stars were getting old, and the team finished sixth in 1965. When the Yankees got off to a 4-16 start in 1966, Houk fired Keane and returned to the dugout. The Yankees fell to 10th and last place, and during the season CBS took over complete ownership.

In January 1973, a syndicate headed by Steinbrenner bought the team. Under CBS, Houk had a free hand on the field while Lee MacPhail handled the front-office duties.

Houk quit on the final day of the 1973 season as the Yanks finished fourth in the Eastern Division. He said that he had not accomplished what he hoped for, and “I blame no one but myself.”

Houk managed for five years in Detroit, never finishing higher than fourth place, then retired to his Florida home. But he returned to baseball in 1981 as manager of the Boston Red Sox and had modest success over four seasons. He had a career record of 1,619-1,531, and upon retiring as a manager for a second and final time, stood 10th on the career list in games managed. He became a vice president of the Minnesota Twins in November 1986 and helped build their World Series champions of the following season.

In addition to his daughter, of Westerville, Ohio, Houk is survived by his son, Robert, of Bainbridge Island, Wash.; 4 grandchildren and 10 great-grandchildren. His wife, Bette, died in 2006.

When Houk was named manager of the Yankees, he affected no false bravado. As Clete Boyer remembered: “At his first meeting, Ralph said we knew how to play the game better than he did. So if we wanted to bunt, bunt. If we wanted to hit and run, then hit and run.”

But his players never forgot that Houk was in command. As Kubek put it in his remembrance of the 1961 season: “None of us questioned Ralph. He was the Major.” 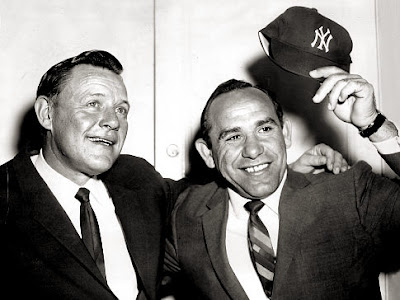 Ralph Houk (l.), who wins the 1961 and '62 World Series as manager of the New York Yankees, stands with Yogi Berra, who tips his cap after being named Houk's successor in 1963.

They say deaths come in threes, and the Yankees, who already have the flags at half staff at Yankee Stadium for George Steinbrenner and Bob Sheppard, suffered yet a third loss in the family Wednesday. Ralph Houk, the combative former World War II hero who managed them to back-to-back world championships in 1961-62 and later became the first skipper to part ways with The Boss, died Wednesday in Winter Haven, Fla. He was 90. His grandson, Scott Slaboden, said he "died peacefully of natural causes after having a brief illness."

Although his Yankee legacy has become almost erased over time, especially since so much of it was spent during the CBS "fall from glory" years, 1964-73, Houk was an integral part of the organization for 12 years and remains the only man to win world championships in his first two seasons as a manager. Nicknamed "The Major" for the rank he achieved in World War II, he earned a Bronze Star, Purple Heart and Silver Star in leading his Ranger battalion in the Battle of the Bulge. Houk joined the Yankees in 1947 as a backup catcher but played only 91 games through 1954, hitting .272 with no homers and 20 RBI.

Yankee farm director Lee MacPhail, however, saw leadership qualities in Houk and asked him to manage the Bombers' Triple-Ateam in Denver for 1955. Among the players on that team were shortstop Tony Kubek and second baseman Bobby Richardson, who would become key players on his '61-'62 Yankee championship clubs.

"He had the Yankees' spirit, the Yankees' winning attitude," Kubek told The AP. "He had all the qualities that make a special manager."

In 1957, the Yankees brought Houk back to the majors as a coach under Casey Stengel. When Dan Topping and Del Webb decided to fire Stengel after the Yankees lost the 1960 World Series to the Pirates, they named Houk to replace him. Houk's 1961 Yankees became one of the greatest teams of all time, winning 109games. Led by Roger Maris' 61 homers that broke Babe Ruth's record, the Yankees went on to defeat the Reds in five games in the World Series.

The following year, the Yankees won a second straight pennant and defeated the San Francisco Giants in seven games in the World Series despite a controversial decision by Houk.

With the Yankees clinging to a 1-0 lead in Game 7, Houk elected to let his righthanded starter Ralph Terry pitch to the dangerous lefthanded-hitting slugger Willie McCovey with Willie Mays on second after a two-out double and the righthanded-hitting Orlando Cepeda on deck. McCovey, who in his previous at-bat against Terry had tripled, hit a vicious liner to Richardson at second to end the Series. 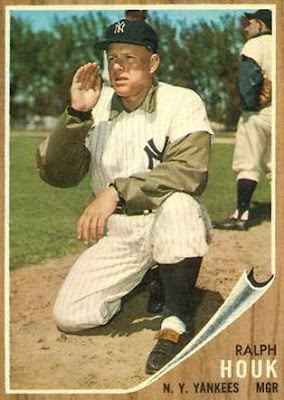 The following year, Houk's Yankees won a third straight pennant but were swept by the Dodgers of Sandy Koufax, Don Drysdale and Johnny Podres in the World Series. After the Series, Topping came to Houk and asked him to move up to the front office as general manager. Houk reluctantly agreed and named Yogi Berra as his replacement. After one year, in which Berra managed the team to another pennant, the Yankees replaced him with Johnny Keane, the Cardinals manager who had just defeated him in the World Series.

"I was the GM when they let (Hall of Fame) broadcasters Mel Allen and Red Barber go, too," Houk said in a 2002 interview. "I had nothing to do with that. What did I know about broadcasting? It was a real mess. I had to be the one to tell Yogi. Worst thing I ever had to do. He'd been my teammate and friend. We didn't talk for a long time after that."

It turned out that the Yankees were beginning to decay in 1964, and in April of 1966 with the team 4-16, Houk was forced to fire Keane and went back on the field to manage again. His second tour of duty was not nearly as successful as his first - the Yanks' best finish was second place in 1970 - and after one year of managing for Steinbrenner, Houk resigned and moved over to the Tigers, with whom he had been secretly negotiating during the '73 season.

Houk, who was just as famous for getting physical with sports writers - Maury Allen of the Post, Jay Dunn of the Trentonian and the Baltimore Sun's Phil Hersh among them - was not used to a meddlesome owner like Steinbrenner. At the end of the season, he told Steinbrenner he was resigning, to which The Boss replied: "You're making a mistake, Ralph, I'm going to go out and get good players here and we're gonna be right back on top."

Last week, speaking to the Daily News in what was likely his last interview, Houk said of Steinbrenner, "He certainly treated me great, and as far as I'm concerned, he's a great guy. George was all out for the ballclub and I can't say anything but good things about him."

bmadden@nydailynews.com
Posted by jtf at 6:14 AM