Dealergate: Destroying Jobs in the Name of “Shared Sacrifice” 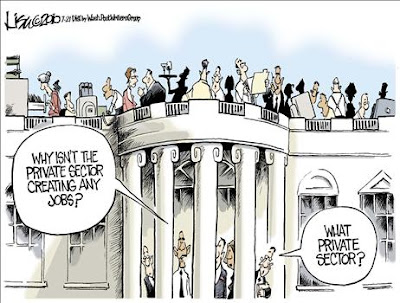 Everything you need to know about the nightmare of government-controlled businesses can be found in a damning new inspector general’s report on Dealergate. The independent review of how and why the Obama administration forced Chrysler and General Motors to oversee mass closures of car dealerships across the country reveals grisly incompetence, fatal bureaucratic hubris, and Big Labor cronyism. No wonder you won’t hear much about the report’s in-depth details in the so-called mainstream media.

Obama ordered the bailout recipients to “prove” their long-term viability by submitting restructuring plans. But White House and Treasury Department “experts” rejected the auto manufacturers’ proposals, citing the too-slow pace of their plans to reduce their dealership networks over a period of five years. Once the auto companies modified those plans to meet government-backed timelines, the money flowed.

But Neil Barofsky, the federal watchdog overseeing the bank-auto-insurance-all-purpose bailout fund, found that the White House auto-industry task force and the Treasury Department “Auto Team” had no basis for ordering the expedited car-dealership closure schedules. They relied on a single consulting firm’s internal report recommending that the U.S. companies adopt foreign auto-industry models to increase profits — a recommendation hotly disputed by auto experts, who questioned whether foreign practices could be applied to domestic dealership networks.

Team Obama’s government auto mechanics also ignored the economic impact of rushing those closures. According to Barofsky, they discounted counter-testimony from industry officials that “closing dealerships in an environment already disrupted by the recession could result in an even greater crisis in sales.”

The inspector general also noted that “it is clear that tens of thousands of dealership jobs were immediately put in jeopardy as a result of the terminations by GM and Chrysler.” After extensive investigation, the watchdog concluded that “the acceleration of dealership closings was not done with any explicit cost savings to the manufacturers in mind.” Only after Capitol Hill critics — both Republicans and Democrats — started questioning the Dealergate decisions did Obama’s auto “experts” come up with market studies and estimated job-loss data to assess the impact of their reckless, arbitrary orders.

In sum, the inspector general found:

At a time when the country was experiencing the worst economic downturn in generations and the government was asking its taxpayers to support a $787 billion stimulus package designed primarily to preserve jobs, Treasury made a series of decisions that may have substantially contributed to the accelerated shuttering of thousands of small businesses and thereby potentially adding tens of thousands of workers to the already lengthy unemployment rolls — all based on a theory and without sufficient consideration of the decisions' broader economic impact.

This is no surprise, of course, considering the amount of actual business expertise among Obama’s auto czars and key staff. That is: zero. Obama’s first auto czar, Steve Rattner, ran a private-equity firm in New York before resigning his position amid a financial ethics cloud.

Rattner’s chief auto-expert adviser, Brian Deese, is a 30-something former Hillary Clinton/Barack Obama campaign aide and law-school graduate with no business experience, who openly boasted that he “never set foot in an automotive assembly plant.”

And Rattner’s auto-czar successor, Ron Bloom, is a far-left union lawyer who cut his teeth under Big Labor boss John Sweeney, has ideological ties to the corporate-hating Labor Zionist movement, and opined that “the blather about free trade, free-markets and the joys of competition is nothing but pabulum for the suckers.”

In search of the rationale for Team Obama’s bizarre, job-killing exercise of power over thousands of small car dealerships, the TARP inspector general may have stumbled onto the truth from Bloom. On page 33 of its report, Barofsky writes:

No one from Treasury, the manufacturers or from anywhere else indicated that implementing a smaller or more gradual dealership termination plan would have resulted in the cataclysmic scenario spelled out in Treasury's response; indeed, when asked explicitly whether the Auto Team could have left the dealerships out of the restructurings, Mr. Bloom, the current head of the Auto Team, confirmed that the Auto Team "could have left any one component (of the restructuring plan) alone," but that doing so would have been inconsistent with the President's mandate for "shared sacrifice."

— Michelle Malkin is the author of Culture of Corruption: Obama and His Team of Tax Cheats, Crooks & Cronies (Regnery 2010). © 2010 Creators Syndicate, Inc.
Posted by jtf at 8:56 AM