Coyotes in the State of Nature


Here’s a two-Americas story for you: Westchester County, in the suburbs of New York City, was home to Hillary Clinton when she pretended to represent New York in the U.S. Senate, and its voters gave Barack Obama 63 percent of their ballots in 2008. It’s the sort of place that causes heavy breathing among the liberal faithful de­voutly awaiting the coming of the New Democratic Majority, that blessed condition that will enrapture America when formerly Republican white suburbanites once and for all join forces with the traditional Democratic coalition of ward heelers and welfare recipients in common cause against the pro-lifers, gun nuts, and tea-partying Palin enthusiasts of the GOP. So sayeth the Gospel according to Paul Begala.

But Westchester County has a prob­lem more often seen in rural, Republican-leaning jurisdictions: coyotes. These ca­nine predators are a real menace, a fact that was dramatically illustrated in late June by the case of young Emily Hod­u­­lik, age six, who was attacked by a pair of coyotes on a leafy suburban street in the quaint town of Rye. The coyotes’ offensive proceeded along classically predatory lines as the canines ignored the other children in the group and targeted the smallest, weakest child. Miss Hodulik suffered serious bite wounds but escaped without life-threatening injuries. She’s undergoing a series of rabies shots, doesn’t like to sleep alone, and is afraid that there are coyotes in the basement of the family home. Local officials have warned Westchester residents to keep an eye out for the beasts, especially if they have small children. 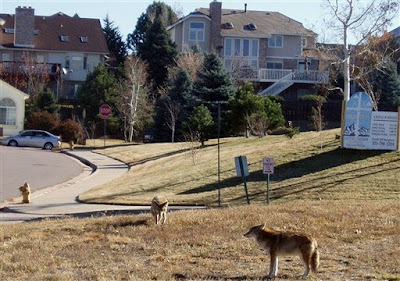 This is an undated file photograph taken in November of 2008 of a pair of coyotes roaming through a housing subdivision in the south Denver suburb of Littleton, Colo., that was taken by a member of the Colorado Division of Wildlife. After a handful of recent attacks by coyotes in suburban Denver enclaves, officials are trying to keep the animals away from residents. (AP Photo/Colorado Divison of Wildlife)

Coyotes like to attack the little ones, human or otherwise. That was the case for one unfortunate coyote that attacked a puppy out for a jog with his master in Travis County, Texas, in the suburbs of Austin, where coyotes have it a little rougher than they do in suburban New York. That particular coyote had the bad luck to set his gaze on a puppy owned by Gov. Rick Perry, who produced a laser-sighted .380-caliber automatic pistol, loaded with hollowpoints, and sent it to the Happy Hunting Grounds.

Governor Perry made light of the epi­sode — he later signed a peace treaty with the San Antonio Spurs’ coyote mascot — but the gunplay riled more than a few liberals. A Huffington Post story about it received more than 3,000 reader comments, many of them mocking in tone, most aghast that the governor was packing his own laser-sighted heat. Some of them bemoaned the suburban sprawl that is encroaching on the coyotes’ natural habitat, all but demanding a collective examination of conscience: Why do the coyotes hate us? Never mind that coyotes have turned up in Central Park, or that one recent deadly coyote attack — ending the life of a young Canadian folk singer — happened on a hiking trail in a national park. Evolution bred coyotes to be predators. They are what they are, and sometimes they have to be shot.

People have a visceral reaction to guns, which is why the reactions to the Supreme Court’s recent decision in McDonald v. City of Chicago have been so emotional. One extraordinarily telling reaction came from David Ignatius of the Washington Post, whose response was headlined: “The Supreme Court Gun Decision Moves Us Toward Anarchy.” Mr. Ignatius wrote: “My biggest worry with Monday’s Supreme Court decision is that by ruling, in effect, that every American can apply for a gun license, the justices will make gun ownership much more pervasive in a society that already has too many guns. After all, if I know that my neighbor is armed and preparing for Armageddon situations where law and order break down (as so many are — just read the right-wing blogs) then I have to think about protecting my family, too. That’s the state-of-nature, everyone for himself logic that prevails in places such as Lebanon, Iraq and Afghanistan.”

Mr. Ignatius here is remarkably forthcoming: He is not worried about guns in the hands of criminals, but about guns in the hands of law-abiding citizens, people who are willing to apply for a permit and jump through the bureaucratic hoops re­quired of gun buyers. His nightmare is not an America in which criminals run amok with Glocks, or even an America in which gun permits are handed out liberally, but an America in which “every American can apply for a gun license.” Never mind the approval of licenses, the mere application gives Mr. Ignatius the howling fantods. It is wonderfully apt that he references the “state of nature” in his criticism, imagining a Hobbesian version of life in these United States: solitary, poor, nasty, brutish, and short, permeated by the aroma of cordite. Mr. Ignatius, like Thomas Hobbes, is casting his lot with Leviathan and makes no apology for it.

That is the essence of 21st-century progressivism: In matters ranging from financial derivatives to education to gun control, the Left believes that we face a choice between a masterful state and a Hobbesian war of all against all. For all of the smart set’s vaunted and self-congratulatory nu­ance, it is this absolutist vision, this Manichean horror, that forms the foun­dation of progressivism.

This, and not the threat of uncontrollable crime, is really at the heart of the subur­ban progressives’ abomination of firearms. Coyotes may be an occasional menace, but the predators most commonly stalking Central Park, Westchester County, or the Austin suburbs go on two legs, not four. Just before the Supreme Court handed down its ruling in McDonald v. City of Chicago, there were in one weekend 50-odd shootings in the Windy City, at least ten of them fatal. Some of the shootings were instances of the random and chaotic violence that plagues urban America. Some were more sinister: Two young black men were found stripped naked and shot, face down in the dirt near the railroad tracks on the South Side. As of June, the murder rate in New York City — which likes to advertise itself as the safest big city in America — was up 7.2 percent over last year.

But the idea that individuals might use firearms lawfully to defend themselves is either anathema to progressives or inconceivable to them. President Obama’s reaction to the Heller decision, the predecessor to McDonald v. Chicago, suffered the in­evitable lacunae: “I have always believed that the Second Amendment protects the right of individuals to bear arms, but I also identify with the need for crime-ravaged communities to save their children from the violence that plagues our streets through commonsense, effective safety measures,” he said, unable to consider the possibility that citizens’ arming themselves against criminals is one potentially effective safety measure. “As president, I will uphold the constitutional rights of law-abiding gun-owners, hunters, and sportsmen. I know that what works in Chicago may not work in Cheyenne.” Coming from a city of gangland executions, Barack Obama affirms his commitment to Elmer Fudd’s blunderbuss, and reasonable people might wonder: What exactly does work in Chicago, Mr. President? That is an unaskable question in the world of Barack Obama, because it is a question that penetrates to the center of his philosophy and exposes it as inadequate.

Violence is traditionally something upon which the state maintains a monopoly, and the application of lethal force is the state’s most jealously guarded prerogative. It is treated as a kind of holy office, which is one of the reasons that American executions are such strangely ritualized ceremonies. Under more frankly statist re­gimes, executions are much more plebeian affairs: China, for instance, has a mobile “death van,” a kind of lethal-injection chamber on wheels, which it uses to dispatch with maximum efficiency those sentenced under one of its 68 varieties of capital offense. The execution vans are manufactured by Jinguan Auto, which also builds fortified limousines for China’s burgeoning class of oligarchs, and there’s a certain symmetry to that.

To use lethal force in self-defense is the ultimate declaration of independence, a kind of momentary secession from the authority of the government whose laws and prisons and police officers have, in that moment, failed the citizen. To acknowledge the right to self-defense — and the concomitant right to be forearmed against aggressors — is to acknowledge that some things are outside the state and its authority, or at least that some moments are outside the state and its authority.

The horror that progressives feel for gun owners is in many ways like the horror they feel for homeschoolers, whom they recognize, correctly, as one of the few truly radical movements in America. Prof. Robin West of Georgetown University’s law school offers a typical reaction to the phenomenon: “The husbands and wives in these families feel themselves to be under a religious compulsion to have large families, a homebound and submissive wife and mother who is responsible for the schooling of the children, and only one breadwinner. These families are not living in romantic, rural, self-sufficient farmhouses; they are in trailer parks, 1,000-square-foot homes, houses owned by relatives, and some, on tarps in fields or parking lots. Their lack of job skills, passed from one generation to the next, depresses the community’s overall economic health and their state’s tax base.” God defend the holy tax base!

Homeschooling families in fact have higher average incomes than non-homeschool families, a fact that Professor West acknowledges and then magics away through the device of the “radically fundamentalist movement family,” the one she locates on tarps in parking lots. Like Mr. Ignatius, Professor West is forthright about the statist origins of her horror: “Parents in many states have full authority, free of all state oversight, to determine the content of their children’s education,” a situation almost as unendurable as life in a 1,000-square-foot house. Professor West writes longingly of the golden age when practically all education was conducted under the tutelage of the state and opting out of the system was forbidden — and “parents who did so were criminals.”

You will not be surprised to read her lamenting a “constitutional culture” dominated by “militias, gun collectors, and ideologues constructing, with little help from courts and no resistance from liberals, an individual Right to Bear Arms.” She connects this Second Amendment horror to other challenges to unlimited state supremacy — the anti-tax movement and citizen border patrols — and, like David Ignatius, she cites Hobbes, framing the debate as Leviathan vs. anarchy, leaving no room for well-ordered liberty under constitutionally limited government: If those rubes out on the tarps can fill the young skulls of their plenteous broods with any old rubbish, without the least privity or countenance of authority, then they’re bound to get funny ideas about guns and taxes and illegal immigrants. And they are bound to chafe at having their lives run by Georgetown law professors.

Just as state schooling is not about education, but about the state, gun control is not about guns: It’s about control. A citizen who can fend for himself when the predators come or the schools fail is less inclined to look to the state for sustenance and oversight in other areas of life. To progressives, that’s an invitation to anarchy. To the men who wrote the Second Amendment, it was a condition of citizenship in a free republic. It’s what free men did, and do.

— Kevin D. Williamson is deputy managing editor of National Review, in whose July 19, 2010, issue this article first appeared.
Posted by jtf at 7:44 AM