Duvall, Nearly 80, Is Still a Darling of Hollywood 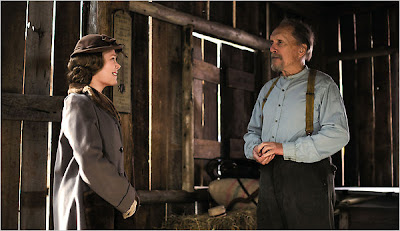 Robert Duvall with Sissy Spacek in the film “Get Low,” directed by Aaron Schneider.

WHEN it came time to fill the lead role in “Get Low” — which embellishes the real-life story of a septuagenarian Tennessee hermit who gave his own “funeral party” in 1938 while still alive — the options weren’t plentiful for the people behind the film. The hermit, Felix Bush, is a worn-out man who has exiled himself to a cabin for four decades, haunted by a youthful trespass. The object of nasty countywide gossip, Felix has a short fuse but comports himself with grizzled dignity. “It’s the kind of role where you want to blur the line between the legend and gravitas of the character and the legend and gravitas of the performer,” the film’s director, Aaron Schneider, said by phone. “Our list of actors was short: Our list was Robert Duvall.”

Next January Mr. Duvall will celebrate his 80th birthday. He has been a Hollywood actor for 48 years, having moved from stage to screen in 1962 as Boo Radley in “To Kill a Mockingbird.” He is among a handful of A-list actors who have neared or reached 80 while suffering little to no career slowdown. Clint Eastwood is 80. Michael Caine is 77. Morgan Freeman and Anthony Hopkins are both in their early 70s. With Gene Hackman, 80, retired, the list pretty much stops there.

Mr. Duvall’s longevity raises two intertwined questions. For one, what has he been doing right all these years? For another, is the end of his laws-of-Hollywood-physics-defying run in sight?

“It’s coming. It’s got to be,” Mr. Duvall said, addressing the second question over an Earl Grey tea at the Four Seasons hotel in Manhattan last Monday. (He’d also spoken by phone a few days earlier.) In town from Virginia, where he shares a 360-acre farm with his wife, two dogs and several horses, he wore black jeans, cowboy boots and a Texas Longhorns track jacket that hewed close to his barrel chest.

But as Mr. Duvall described several would-be projects on his “front burner,” he made clear that he’s in no hurry to bow out. There’s a postwar drama written by Billy Bob Thornton that he adores, a movie he wants to make with his longtime pal James Caan, and a reboot of the star-crossed “Man Who Killed Don Quixote,” in which Terry Gilliam has cast Mr. Duvall as the titular windmill jouster. “These are some terrific roles,” he said. “I want these projects to get off the ground.”

To answer the question of Mr. Duvall’s longevity, a good place to start is the range of characters he’s inhabited over the years. He began acting in the ’50s but was a Hollywood latecomer — he “arrived a fully formed actor,” said the British film critic Tom Shone, the author of “Blockbuster: How Hollywood Learned to Stop Worrying and Love the Summer.” Mr. Duvall rose to prominence in the ’70s alongside figures like Al Pacino, Dustin Hoffman and Robert De Niro, who brought a new energy to the movies. They were not simply “movie stars, like Errol Flynn or Clark Gable,” said Bruce Beresford, who directed Mr. Duvall in 1983’s “Tender Mercies,” but also “superlative actors” who “became totally identified with whichever role they were playing.”

Mr. Duvall stood out in Robert Altman’s “Countdown” (1968) and George Lucas’s “THX 1138” (1971), but it was in Francis Ford Coppola’s “Godfather” (1972), playing cool-headed Corleone consigliere Tom Hagen, that he gave his first indelible performance. In 1979 he took a 180-degree turn and won raves playing two military men whose heads were about as cool as napalm: Bull Meechum in “The Great Santini” and Lieutenant Colonel Kilgore in “Apocalypse Now.” In “Apocalypse” Mr. Duvall’s performance “upset the moral tidiness of the film,” Mr. Shone said, complicating the “peacenik” proceedings “with this charismatic, full-throated, fantastic hawk.” 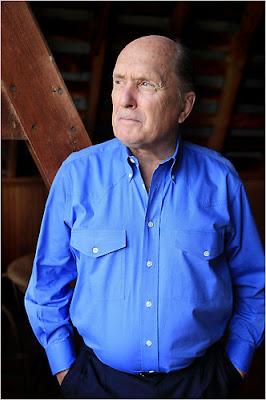 Mr. Duvall at his farm in Virginia

Downshifting in “Tender Mercies,” Mr. Duvall won the best actor Oscar for his restrained portrayal of Mac Sledge, a down-and-out country singer whose inner storms roil beneath but never quite break through his wistful surface. In the years since, Mr. Duvall has played a hardboiled detective, a Texas preacher, Dwight D. Eisenhower and Stalin. What unites these performances, he said, is that, “Within each character, I like to find the contradictions. Even when I played Stalin, I tried to find a vulnerable point for that guy.”

Sissy Spacek said, “He embodies the character,” describing the experience of watching Mr. Duvall at work on “Get Low,” which opens Friday, and in which she has a supporting role. (Bill Murray co-stars as an undertaker.) “Every actor has their own process, but his is seamless. He just becomes.”

That aura of seamlessness results from a technique that balances intense preparation and spontaneity. After taking a role, Mr. Duvall does his homework. To play Mac Sledge he frequented honky-tonk bars and even sang with a makeshift country band. To inhabit Euliss Dewey, a Pentecostal preacher and heartfelt ham in “The Apostle” (1997), which Mr. Duvall also wrote and directed, he spent years visiting black churches. He marinates in such research but makes no firm decisions about how to play a part until cameras roll. Mr. Beresford recalled that, during rehearsals for “Tender Mercies,” Mr. Duvall’s readings were curiously “flat and unemotional,” but that he bloomed when filming began.

Mr. Duvall’s unshowy acting — he had a tendency while shooting “Tender Mercies” to turn his back to the camera, Mr. Beresford said — and chameleonic gifts are artistic assets, but they’ve also been something of a commercial liability. Thanks to his ability to dissolve so fully into characters, Mr. Duvall has alternated between tremendous supporting performances and tremendous leading performances without ever moving definitively from one column to the other. “Perhaps some of the most brilliant actors are so brilliant that people don’t identify them that well,” Mr. Beresford said, contrasting Mr. Duvall with a megastar like Tom Cruise, “who is always Tom Cruise in every role, no matter how competent or capable.”

In an e-mail message Mr. Coppola said that Mr. Duvall “always brings himself to whatever role he plays.” That Mr. Duvall has occupied a gray area between supporting man and top-liner, Mr. Coppola suggested, represents a shortcoming in the distinction between categories. At a certain point, Mr. Coppola wrote, it’s “hard to say the difference between leading men and great character actors.”

Mr. Duvall said he likes parts that give him the time and space to dig in. His favorite role is the former Texas Ranger Augustus McCrae, whom he played in the six-hour CBS mini-series “Lonesome Dove.” “That’s like the Bible down in Texas,” Mr. Duvall said. “It’s not as well directed as ‘The Godfather,’ but the arc of it is incredible.”

But he also said he can find great satisfaction in a role that takes up only a sliver of screen time: “You can do a lot if it’s well-defined, or you try to expand the part and find three dimensions.” While filming his cameo opposite Viggo Mortensen in “The Road,” he recalled, “I improvised a whole scene that wasn’t in the script, and they left it in.” Mr. Duvall grinned, his eyes crinkling up mischievously at their corners. (In that scene Mr. Duvall’s character, Old Man, is looking for his son.) “I didn’t ask the director. I didn’t ask permission. I just told Viggo, ‘Get ready, I’m going to do something here.’ ”
Posted by jtf at 11:04 AM