We are giving KSM a farcical show trial. 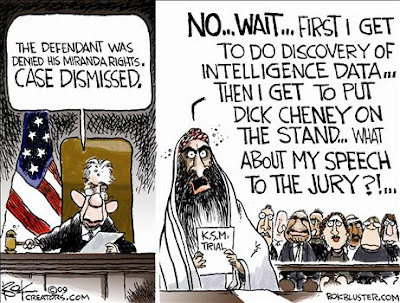 For late-19th-century anarchists, terrorism was the “propaganda of the deed.” And the most successful propaganda-by-deed in history was 9/11 — not just the most destructive, but the most spectacular and telegenic.

And now its self-proclaimed architect, Khalid Sheikh Mohammed, has been given by the Obama administration a civilian trial in New York. Just as the memory fades, 9/11 has been granted a second life — and KSM, a second act: 9/11, The Director’s Cut, narration by KSM.

Sept. 11, 2001 had to speak for itself. A decade later, the deed will be given voice. KSM has gratuitously been presented with the greatest propaganda platform imaginable — a civilian trial in the media capital of the world — from which to proclaim the glory of jihad and the criminality of infidel America.

So why is Attorney General Eric Holder doing this? Ostensibly, to demonstrate to the world the superiority of our system, in which the rule of law and the fair trial reign.

Really? What happens if KSM (and his co-defendants) “do not get convicted,” asked Senate Judiciary Committee member Herb Kohl. “Failure is not an option,” replied Holder. Not an option? Doesn’t the presumption of innocence, er, presume that prosecutorial failure — acquittal, hung jury — is an option? By undermining that presumption, Holder is undermining the fairness of the trial, the demonstration of which is the alleged rationale for putting on this show in the first place.

Moreover, everyone knows that whatever the outcome of the trial, KSM will never walk free. He will spend the rest of his natural life in U.S. custody. Which makes the proceedings a farcical show trial from the very beginning.

Apart from the fact that any such trial will be a security nightmare and a terror threat to New York — what better propaganda-by-deed than blowing up the entire courtroom, making KSM a martyr and making the judge, jury, and spectators into fresh victims? — it will endanger U.S. security. Civilian courts with broad rights of cross-examination and discovery give terrorists access to crucial information about intelligence sources and methods.

That’s precisely what happened during the civilian New York trial of the 1993 World Trade Center bombers. The prosecution was forced to turn over to the defense a list of 200 unindicted co-conspirators, including the name Osama bin Laden. “Within ten days, a copy of that list reached bin Laden in Khartoum,” wrote former Attorney General Michael Mukasey, the presiding judge at that trial, “letting him know that his connection to that case had been discovered.”

Finally, there’s the moral logic. It’s not as if Holder opposes military commissions on principle. On the same day he sent KSM to a civilian trial in New York, Holder announced he was sending Abd al-Rahim al-Nashiri, mastermind of the attack on the U.S.S. Cole, to a military tribunal.

By what logic? In his congressional testimony Wednesday, Holder was utterly incoherent in trying to explain. In his November 13 news conference, he seemed to be saying that if you attack a civilian target, as in 9/11, you get a civilian trial; a military target like the Cole, and you get a military tribunal.

What a perverse moral calculus. Which is the war crime — an attack on defenseless civilians or an attack on a military target such as a warship, an accepted act of war which the U.S. itself has engaged in countless times?

By what possible moral reasoning, then, does KSM, who perpetrates the obvious and egregious war crime, receive the special protections and constitutional niceties of a civilian courtroom, while he who attacked a warship is relegated to a military tribunal?

Moreover, the incentive offered any jihadi is as irresistible as it is perverse: Kill as many civilians as possible on American soil and Holder will give you Miranda rights, a lawyer, a propaganda platform — everything but your own blog.

Alternatively, Holder tried to make the case that he chose a civilian New York trial as a more likely venue for securing a conviction. An absurdity: By the time Obama came to office, KSM was ready to go before a military commission, plead guilty and be executed. It’s Obama who blocked a process that would have yielded the swiftest and most certain justice.

Indeed, the perfect justice. Whenever a jihadist volunteers for martyrdom, we should grant his wish. Instead, this one, the most murderous and unrepentant of all, gets to dance and declaim at the scene of his crime.

Holder himself told the Washington Post that the coming New York trial will be “the trial of the century.” The last such was the trial of O. J. Simpson.

— Charles Krauthammer is a nationally syndicated columnist. © 2009, The Washington Post Writers Group
Posted by jtf at 7:06 AM