Saints at a Cultural Crossroads

At monasteries on Mount Athos in northern Greece, you wake in the night to the sound of Greek Orthodox monks chanting Byzantine prayers. It’s an unforgettable sound, distant and unearthly, but also inside you, like a buzz in the blood. 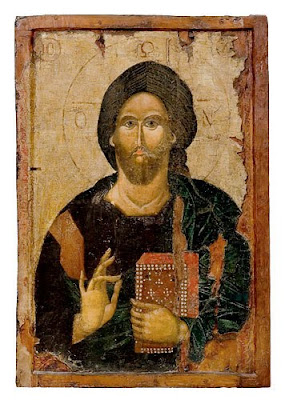 The Origins of El Greco Christ Pantokrator, from the 14th century, is among the religious works in this show at the Onassis Cultural Center

The painter Domenikos Theotokopoulos, better known as El Greco, almost certainly heard it growing up far to the south on the island of Crete. You can hear it today when you visit “The Origins of El Greco: Icon Painting in Venetian Crete,” a lustrous exhibition at the Onassis Cultural Center in Midtown Manhattan.

With its extraordinary ensemble of almost 50 religious images, most of them painted on Crete — seven by El Greco and some of the rest by artists whose names are not known — the show is essentially a dual-purpose visual essay. On the one hand it roughs out the texture of a specific, cosmopolitan, East-meets-West island culture. On the other it tells the story of a great artist who emerged from that culture, lived outside it and lastingly belonged to it.

At the time of El Greco’s birth, in 1541, Crete had been a preserve of Byzantine tradition for a hundred years, since the fall of Constantinople to the Turks in 1453, and a colonial possession of Venice for more than three centuries. Most of the population was Greek Orthodox, but economic power was in the hands of a Roman Catholic minority. Local artists necessarily catered to both, turning out Byzantine-style icons for one, late Gothic devotional paintings for the other and, increasingly, synthesizing the two modes.

The show opens with an example of Byzantine art in something like a pure form: a large 14th-century image (unsigned, as many of these paintings are) of Christ Pantokrator, or All Powerful, modeled after an older icon preserved in the Vatopedi monastery on Mount Athos. It’s a classic of its kind, an egg tempera painting on a wood panel of a bust-length male figure, dressed in royal purple, against a gilded ground.

The figure is half-abstract. The bearded face, set on a brawny neck, is a dainty oval topped by a turban of pulled-back hair. The nose is thin, a long droplet of flesh; the mouth, with its coral-pink lips, is minute, unsuited for eating or speaking. The eyes — large, shadowed and radiating fine stress lines — are the central feature. They look impassively at or past us, as we look into them. In the context of a church or monastery, a two-way connection between icon and worshiper is assumed. 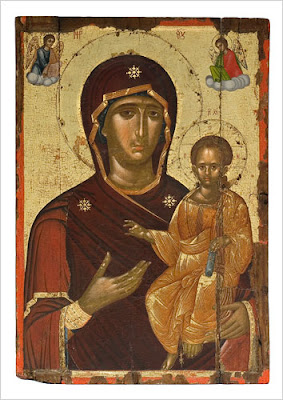 "Virgin Hodegetria" from the Holy Monastery of Saint Panteleemon in Fodele, Crete.

No doubt for some viewers, the much-reproduced Pantokrator image more or less defines icons as a genre: conservative and limited in variety. But the show, organized by Anastasia Drandaki, curator of the Byzantine collection at the Benaki Museum in Athens, demonstrates otherwise.

The Virgin, for example, appears in several guises: as a nursing mother, as the mourner of an adult child, as a corpse shrouded in ultramarine and about to be beamed up to heaven. Saints come in many picturesque forms and types. In a sparkling little panel, two spun-gold soldier-saints, wearing chain-mail miniskirts, do their martial thing: one skewers a dragon, the other pins the emperor Julian the Apostate like a bug to the ground.

A depiction of the death of St. Sabas is set in a craggy landscape dotted with hermits’ caves and painted in a Tuscan, or maybe Persian, palette of pink, orange and bread-crust brown. Aged and infirm monks — one riding a lion, another hunched in a litter, a third crawling on the ground — approach the saint’s prone body. Their faces are painstakingly detailed; his is gone entirely, worn away by the kisses of worshipers over the centuries.

By the time this picture was done in the second half of the 15th century, painting in Crete had moved far beyond categories like Byzantine and Gothic. Artists had absorbed Renaissance naturalism and were pushing toward Mannerism, inventing, stealing and collaging motifs as they went. In a “Pieta,” on loan from the State Hermitage Museum in St. Petersburg, the figures of Jesus, Mary and St. John are straight-up Giovanni Bellini plunked down on a plain gold ground. Is the painting Cretan or Venetian? Your call.

In Crete, an art-star system, long in place in Italy, came into vogue. Many early pictures went unsigned, but as painting grew more cross-culturally idiosyncratic, names appeared. Artists like Angelos, Andreas Pavias and Nikoloas Tzafouris enjoyed considerable celebrity, as did the home-grown Mannerist Georgios Klontzas, whose fantastically seething miniaturist cosmologies are among the show’s highlights. By 1584, Michael Damaskenos, who was a big deal in Venice, had returned to Crete to be a big deal there, perfecting a Byzantine-Renaissance synthesis that sold like hot cakes and spawned countless imitators.

Where was Domenikos Theotokopoulos in all of this? He was in the cosmopolitan thick of things. Until around 1567, when he was in his mid-20s, he stayed in Crete and thrived. Not much of his output from that period survives, but a few things do, and they are fascinating documents of an ambitious career on the move. 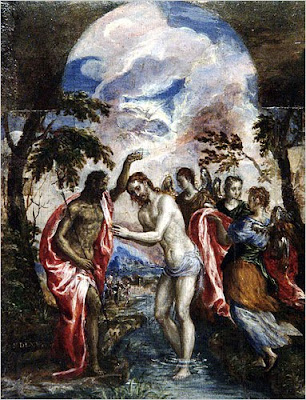 "The Baptism of Christ," by El Greco, circa 1570, at "The Origins of El Greco: Icon Painting in Venetian Crete"


A small, beat-up “Dormition of the Virgin,” which some scholars take to be his earliest known work, is standard-issue Byzantine, with foreign intrusions. Italianate angels parachute into the scene; a fancy gold candlestick with figures of female nudes sits indecorously front and center in what is, after all, a funeral.

The painting dates to sometime before 1567, when El Greco left — permanently, it turned out — for Venice. He may have spent time with Titian there. He certainly looked hard at the master’s painting and at Tintoretto’s, and then at Michelangelo’s and Parmigianino’s when he got to Rome in 1570. Bits of all of them stew around in a murky painting of the “Adoration of the Shepherds” that most likely belongs to the Roman stay.

He moved on to Spain with great hopes: King Philip II was a big fan. But then, for some reason, he wasn’t. What happened? Most likely the artist’s peculiar style — Mannerist extravagance laced with island-art gumbo — didn’t fly after all at court, where suavity usually tends to be rewarded. So he ended up working for churches, the institutions that had hired him in the first place in Crete. And the icon painter in him gradually resurfaced.

We see it in the very last painting in the show, a 1603 oil study for a “Coronation of the Virgin” commissioned by the Hospital of Charity in the town of Illescas. The composition has an iconlike symmetry. The figures, in their expressive abstraction, are as much Byzantine as Mannerist. And the picture scintillates with light, illusionistically painted rather than reflected from gold. Even cherubs tumbling around like kittens can distract from the picture’s nuclear focus: this is an image meant to promote, as music can, time-suspending, space-vivifying contemplation.

Exactly this psycho-sensual dynamic lies at the heart of how icons, as spiritual utensils, function. I wish the exhibition made something of this; had taken, as its third theme, the reality of these objects, not just as historical artifacts illustrating the progress of a culture or a famous career, but also as living and interactive energy sources, designed to embody and radiate charisma.

But that’s a major subject. It needs a full-dress show of its own. Maybe some day we’ll get it. In the meantime this one has some of the most enwrapping and enrapturing art in town, framed by alert scholarship, a lambent environment (the installation design is by Daniel Kershaw), and a score of Byzantine music, arranged and performed by the Greek ensemble En Chordais, that will soak into your system and stay there. Miraculously, admission to all of this is free.

Multimedia
Slide Show
Icon Painting and Crete
Posted by jtf at 11:30 AM