The Art of Karen Laub-Novak

Last week I was introduced to the work of the late Karen Laub-Novak (1938–2009), on exhibit at the John Paul II Cultural Center in Washington, D.C. Only vaguely familiar with her and her work, I was curious to see how her art relates to the deeper questions of life and faith, and to see a collection from a successful, contemporary Catholic artist. 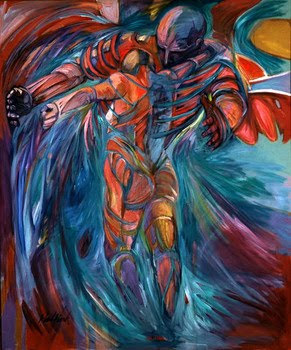 Laub-Novak’s works in oil, bright and imposing, dominate the exhibit. The overwhelming theme among these works, which are all focused on human forms, is of struggle; the body is the locus of tension and decision. Laub-Novak’s figures are, on the one hand, carefully studied and anatomically examined; she depicts them as flesh and bones, occasionally with an almost x-ray quality. She seems to revel in muscle mass, the tension of individual sinews wrapping around and connecting the body. On the other hand, as people they are left undefined: almost anti-gravitational at times, they are positioned without grounding and presented without context; their extremities trail off or are truncated; their faces are obscured. Nevertheless, by omitting definition in the figures, Laub-Novak seems to invite the viewer to consider what forces or ideas these figures are battling. While she stresses the physical and yet leaves it incomplete, she introduces the metaphysical and highlights the fragility of the distinction between the two in the human experience. Some of her choices in color and composition are too harsh for my taste, but I was struck by Laub-Novak’s ability to convey one single moment like a cross-section of motion. Reflecting on this juxtaposition, I was reminded of Eliot’s image of “the still point of the turning world. Neither flesh nor fleshless.”

One striking piece in a spectrum of whites, reds, and blacks called “Confusion” focuses on a proportional male figure, standing in profile. His body is almost lost in a conglomeration; blending iterations of himself which pull him in different directions and combine with him to form an abstract shape. A faint outline of a secondary facial profile indicates the motion of the figure turning his head down and to his left, away from the viewer. Whether he is turning aside from a goal, redirecting his thoughts, or hanging his head under oppression is left undetermined.

One oil painting stands apart from its group and indeed from the entire exhibit: a portrait entitled “Fr. Richard Novak, CSC In Orvieto, Italy.” Fr. Novak stands in the foreground of an Orvieto street with the cathedral in view behind him, facing the viewer with a genuinely happy expression. The close-up view of the priest and angular perspective on the street lends a snapshot-like quality to the painting; even without the hint of the name in the title, I would have guessed that the artist was familiar with her subject. Fr. Novak’s peaceful and unassuming presence gives the painting a lighter and perhaps less serious tone than her other work; yet some foreboding background color and one intriguing detail (the priest’s crucifix hangs askew from his neck, half-hidden in his cassock) ensure that the viewer is not left without food for thought.

Coming upon Laub-Novak’s lithograph series on T.S. Eliot’s “Ash Wednesday,” I was excited to find explicit evidence of Eliot’s influence on her after her oils had already brought the poet to mind. Like the oils, these prints illustrate states of the soul and the emotions through bold imagery of the body. In this medium, however, Laub-Novak searches further along the lines of human weakness, where many of her oils depict strength. “At the Turning of the Stairs,” a mysterious reflection on part III of the poem, relates most to Laub-Novak’s other works compositionally. I preferred “Redeem the Time,” however, a work with more classic composition than many of her other pieces, taking up part IV with Eliot’s image of the “jeweled unicorns” and a subtle approach to the “silent sister veiled in white and blue.”

The remainder of the exhibit consists mostly of the “Duino Elegies” and an Apocalypse Series, both sets of lithographs. The style of the apocalyptic pieces is more open and dynamic, eliciting the confusion and drama of the event. The “Elegies” have a more precise and measured character, and are darker and more unsettling. 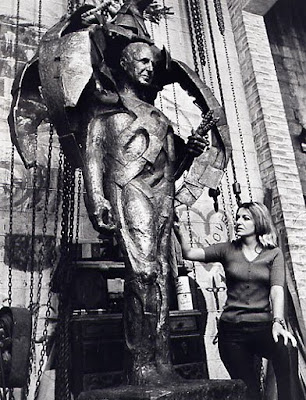 But I was struck most of all by a solitary watercolor which, half-hidden in the entrance to the main exhibit, could easily be overlooked. This piece, “The Original Big Apple,” presents a unique perspective on the scandal of Eden; the fallen couple is depicted standing within the core of the apple, which hangs from a tree around which the serpent, large and dominating, is wrapped. Despite what appears to be inferior technique and presentation—the paint as well as the ink in the piece are almost carelessly applied, the paper is buckled, and pencil sketches are evident—the thoughtfulness combined with delicacy in this work are distinct from and in some ways preferable to the more ambitious style of the others.

That Karen Laub-Novak was a woman of faith is evident through her work. Even if her biblically themed paintings and lithographs are not indication enough, a few samples of her work in bronze, Church commissions, are certainly expressions of a religious spirit. I understand that she did not consider her work religious art per se, and I would second her there—the questions she addresses, she addresses from the human perspective. They are more an invitation to introspection than a directive toward the divine. Nevertheless, it is clear that all the pieces drive at the deeper questions of our existence, and that they originate from an artist who believed the answers will be deeper yet.

Anonymous said...
This comment has been removed by a blog administrator.
12:17 PM

Anonymous said...
This comment has been removed by a blog administrator.
6:58 AM

Anonymous said...
This comment has been removed by a blog administrator.
2:59 PM

Anonymous said...
This comment has been removed by a blog administrator.
11:47 PM