BY WILL BLYTHE - Correspondent
The Raleigh News & Observer
http://www.newsobserver.com/
8 November 2009 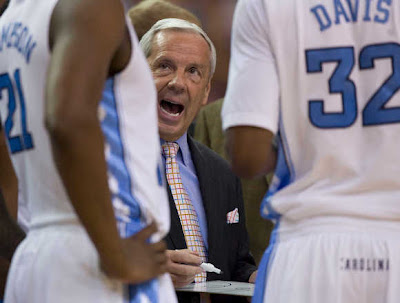 Coaches' memoirs are usually a sorry lot, rife with the sorts of nostrums and treacle and pithy life lessons one endures in the campaign biographies of politicians and the masterworks of celebrities.

The problem is that as autobiographers, coaches tend to play it safe. To put their propriety into basketball terms, they get a lead and resort to the sort of stall ball once famous in these parts. Piety prevails. Homilies are spun. Backsides are kissed. The chair-thrower, the jacket-stomper, the profanity-spewer are nowhere in sight.

The modern coach represents himself as a leader in the vein of General Electric's Jack Welch or Berkshire-Hathaway's Warren Buffett, successful memoirists themselves. His vast knowledge of human nature and mastery of motivational tactics simply can't be confined to a gym. His book is marketed to white-collar Joes who are supposed to apply the wisdom of a genius in help-side defense to the game of corporate ascent. To that, this reader says: as an experiment, try stomping on your jacket at work one day or cursing your boss as if he were a ref, and see how many office "victories" you win.

The first thing, therefore, that needs to be said about North Carolina basketball coach Roy Williams' memoir "Hard Work" is that it isn't like that. Yes, there is some coach-speak in it but rather than a portrait as manicured as Rick Pitino's shiny little nails, readers actually - refreshingly - get a close look at a man unwilling or unable to groom his image, a fellow perhaps unashamed of who he really is. Which is to say a "plodder," as Williams puts it, from the North Carolina mountains who grew up poor in a broken family headed by his adored mother, Lallage. He was a feisty but mediocre athlete (and not much of a square dancer, either) who knew early he was destined to be a coach.

The book's structure feels a little gerrymandered, and is not so much a fast march toward an inevitable ending as an afternoon spent driving around town doing errands, a common deficiency of narratives built of taped conversations and hastily wrapped in the face of terrifying deadlines. But Tim Crothers, Williams' co-writer, has done an excellent job of eliciting new material from the coach and embodying these revelations in a salty Carolinian voice, equal parts swagger and humility. This is no small accomplishment.

We already knew that Roy Williams didn't particularly care for his father Babe's roaming ways, but until this book, we had no idea that as a 14-year-old, the future coach pulled his dad off his mother during a fight, knocked him to the floor and thrust a bottle under his chin. He told his father: "Get out of here or I'll bust this over your head. I'll kill you." When decades later, a wary reconciliation occurs between father and son, it is far more impressive, given the violence here. 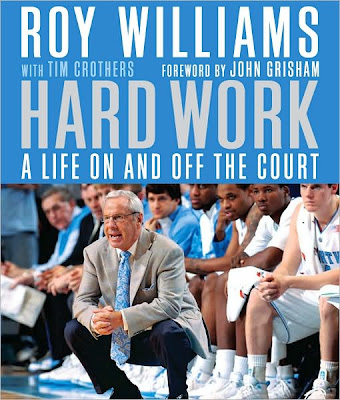 We knew that Williams could on occasion be a little ornery, but we had no idea about how ornery. Home to Asheville from college, he found himself stuck in the passing lane behind a slow car. Eventually, he pulled up alongside to see a woman driving and a man asleep in the passenger seat. He yelled, "Lady, either drive faster or pull that old piece of [expletive] ...." The passenger woke up and Williams saw that it was his Uncle Gordon. The driver was his Aunt Bertha.

We knew he was competitive, but we didn't realize that he'd actually race his assistant coach, Steve Robinson, to see who could put their keys in the office door lock first. "Gotcha!" Williams, triumphant, said. Robinson didn't even know they were competing. "It's always a competition," Williams told him.

And of course, if we follow this sort of thing, we knew that Williams, then coaching at Kansas, went nose-to-nose with Duke coach Mike Krzyzewski in 2000 during the second round of the NCAA tournament. "I'll tell you what you can do," he told Krzyzewski, before telling him a lot of other things you can't print in a newspaper.

After the UNC team that would eventually win the NCAA championship in 2005 unexpectedly lost its season opener to Santa Clara, Williams forbade the Tar Heels from hitting the beaches of Maui. We knew he was mad, but we didn't know quite how mad. "They had made me mad and so I was going to make them mad. I was going to get even," he writes. "I was going to run them until half the team puked. I was vicious and they responded."

I was vicious and they responded!

This coaching lore may not be the most corporate of mantras, but Roy Williams seems like the kind of guy who'd rather hit the boards than the boardrooms. "Hard Work" is a successful coach's memoir not because it provides a blueprint for success but because it reveals the humiliations and insecurities that have stoked Williams' competitive fire and made him a basketball coach. May he always feel free to sling that jacket.

Will Blythe's memoir, "To Hate Like This Is to Be Happy Forever," examines the UNC-Duke basketball rivalry from a Carolina fan's perspective.

Roy Williams will sign copies of his book "Hard Work: My Life On and Off the Court" at 7:30 p.m. Tuesday at Quail Ridge Books & Music in Raleigh, and 7:30 p.m. Friday at The Regulator Bookshop in Durham. Tickets for the signing lines will be issued with the purchase of each book.
Posted by jtf at 3:44 PM

Email ThisBlogThis!Share to TwitterShare to FacebookShare to Pinterest
Labels: Basketball, Books and Things