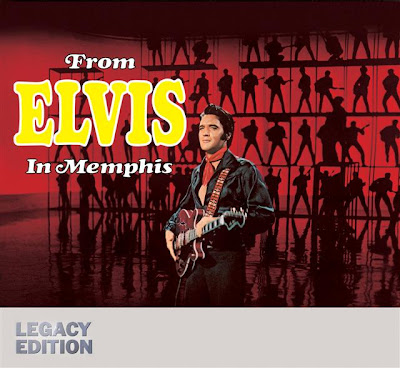 Hot on the heels of the phenomenal success of his so called “‘68 Comeback Special”, aired that December on NBC, Elvis Presley made one of the smartest moves of his career. He returned to Memphis, for the first time since his days with Sun Records, to record an album.

From Elvis in Memphis: Legacy Edition is the result of those 1969 recordings, and 40 years later, it’s easy to see why so many fans and critics consider this the pinnacle of the King’s powers as an artist. It’s Elvis at his best, and fully aware of that fact. He’s surrounded by top-notch writers and musicians and, as with the television performance, he’s clearly having fun doing something he loves. He’s in the best vocal shape since before his stint in the army, and he’s quite possibly more open to various styles and sounds than when he did his first Sun sessions.

Disc one of the Legacy Edition follows the 12 original From Elvis in Memphis tracks with four bonus recordings from the sessions, including a cover of “Hey Jude” that, although Presley plays fast and loose with the lyrics—or possibly, just doesn’t know them very well, given his laughter at the end of the song—is yet another surprising example, among many on this album, of both the power of his voice and his willingness to pull from all sorts of musical sources.

Disc two adds the ten tracks, also from the 1969 Memphis sessions, initially featured on the first half of From Memphis to Vegas - From Vegas to Memphis, which has seen some of its songs reissued over the years as Back in Memphis, and as parts of various compilations. These, along with four single mixes of album tracks and six non-album singles, round out the Legacy Edition release for a total of 36 tracks from Elvis’s sessions at Chip Moman’s American Studio. The singles appear in their original mono format and include both the chart hits, like “In The Ghetto”, “Suspicious Minds”, “Kentucky Rain”, and “Don’t Cry Daddy”, as well as their B-sides, such as “Any Day Now”, “You’ll Think of Me”, “My Little Friend”, and “Rubberneckin’”. 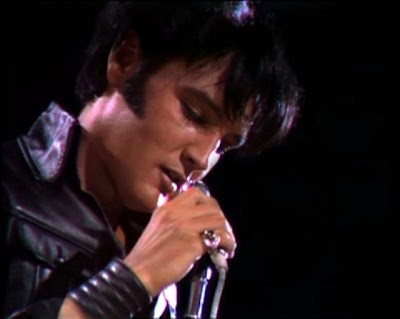 Extensive liner notes for this set were written by the Memphis based authors, filmmakers, and historians Robert Gordon and Tara McAdams, whose works include the books It Came From Memphis and The Elvis Handbook and the documentary films Respect Yourself: The Stax Records Story and Shakespeare Was a Big George Jones Fan: Cowboy Jack Clement’s Home Movies. In addition to those notes, the accompanying booklet features several wonderful photos of Elvis with his Memphis band and back up singers and of his opening night in Las Vegas. A complete list of musicians at the sessions and details of the overdubs is also included.

Of course, it’s still the music that really sets this set apart. The newly remastered recordings allow listeners to experience every nuance of Elvis’s phrasing and delivery, and it’s truly difficult to choose specific tracks that stand out among such singular performances. On the first disc, “Any Day Now” and “In the Ghetto” are naturally the clinchers, but “Power of My Love” is a stunningly, well, powerful mid-album dark horse. On the second disc, one might argue that it’s all about the singles, but that would do grave injustice to Elvis’s masterful interpretation of Percy Mayfield’s “Stranger in My Own Home Town,” which is a true testament his unique ability to pay tribute to the artists he loved while simultaneously making a song incontestably his own.

With the fortieth anniversary of the recordings—and the remastering, repackaging, and releasing as a complete collection—From Elvis in Memphis: Legacy Edition has, at long last, given these tracks the treatment they deserve as some of the best music Elvis Presley ever made.