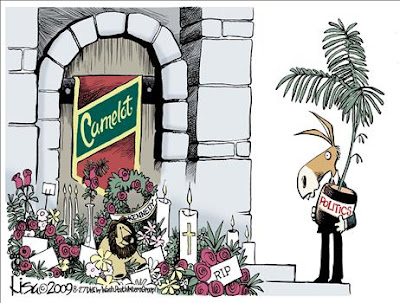 With Sen. Ted Kennedy dead at 77, the political iconographers on Wednesday were working feverishly, like alchemists over a fire.

The Kennedy legacy has always been about American royalty and the appetites of kings and the use of myth, and that myth was always Camelot, those shining knights and the idealistic boy who drew the sword from the stone. With the death of the Massachusetts Democrat, finally, mercifully, let's let Camelot go.

The iconographers on the political right, including some who call themselves Christians, were busy damning his soul to hell for walking away from that crash at Chappaquiddick 40 years ago.

He let young Mary Jo Kopechne drown in the Oldsmobile, her body twisting to find pockets of air in that submerged car as he made it to shore, then waited hours to sober up, put his clout together and save his political career.

Some critics hated him for his politics. Others hated him because his only punishment for Chappaquiddick was that he couldn't be president and so was sentenced to the job of senator for life. Most were upset that the media canonized him as a liberal lion and used Camelot to shield him. It doesn't really matter now.

But can you call yourself a Christian and hope that a man's soul be damned?

On Wednesday, many on the political left -- including some made visibly uncomfortable with any talk of souls -- busily ignored Mary Jo, just as they've always ignored her. But they grabbed onto Camelot for one last ride, and used a dead Kennedy to push for nationalized health care.

With so much Kennedy adulation and hatred in the air, I had the good fortune to read what his sister-in-law once said about myth and history and Camelot.

Jacqueline Bouvier Kennedy ignited the Camelot myth in Life magazine just one week after the assassination of her husband, President John F. Kennedy.

To graft Camelot and the Kennedys in the American mind, she needed a partner and chose pro-Kennedy journalist Theodore H. White.

After that interview, the idealism of the boy king who drew the sword from the stone was permanently ceded to the Kennedys, first to John in death, then to his brother Robert, who was later assassinated.

But it protected Ted Kennedy the best.

Camelot was so powerful that even before Ted Kennedy's death, there were clumsy attempts to graft it onto our current president from Chicago. Invariably they'll try again.

What worried Jacqueline Kennedy in 1963 were the historians. She asked White to rescue her late husband from all those "bitter people" who'd write the histories. She beat them to it with Camelot.

According to White's notes of the interview, Mrs. Kennedy repeated again and again how she and her husband loved the musical "Camelot." She said the president especially loved one of the songs.

"I'd get out of bed at night and play it for him, when it was so cold getting out of bed ... on a Victrola, 10 years old -- and the song he loved most came at the very end of this record, the last side of Camelot, sad Camelot, 'Don't let it be forgot, that once there was a spot, for one brief shining moment that was known as Camelot.'

"There will never be another Camelot again," Mrs. Kennedy told White.

White got the message. He understood her gracious command. And so did the editors of Life. It was the Kennedys and Camelot. It's been that way ever since.

You'll see what's left of Camelot in the news coverage of the senator's funeral over the weekend. It's all been ground together, through the alchemy of modern American politics.

And if there is a Kennedy legacy, it's not his political philosophy so much as the bizarre American yearning for royalty and myth.

During her interview with White, Mrs. Kennedy also spoke of drama and history in those moments before photographers made the iconic pictures on the day the president was assassinated.

"Everybody kept saying to me to put a cold towel around my head and wipe the blood off. Later I saw myself in the mirror, my whole face spattered with blood and hair. ... I wiped it off with Kleenex. ... History! ... I thought, no one really wants me there. Then one second later, I thought, why did I wash the blood off? I should have left it there. Let them see what they've done.

"If I'd just had the blood and caked hair when they took the picture. ... Then later I said to Bobby -- what's the line between history and drama? I should have kept the blood on."

That line between history and drama for the Kennedys was never very thick, like the line between American realism and our yearning for royalty, and for comforting political myths.

jskass@tribune.com
Posted by jtf at 11:08 AM