Dore Gold’s The Rise of Nuclear Iran -- How Tehran Defies the West provides a dire warning: Despite the current problems raging in the Middle East, the worst may have yet to come. The Islamic Revolution that started in Tehran in 1979 has given birth to “an octopus” with tentacles that have grown to stretch far beyond Iran’s borders. 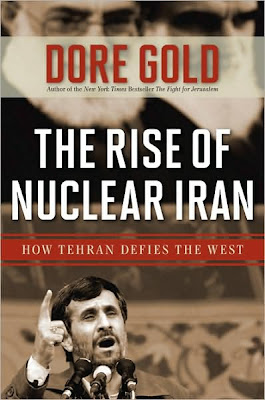 For thirty years, the West has been unable to contain this growth as Iran has moved closer and closer to regional hegemony and a nuclear weapons capability. Gold persuasively details four reasons why the West has failed to stop Iran:

1.) Tehran’s march to a nuclear weapons capability has been along a road built on diplomatic deception. The Persian word for deception is “taqiya” -- saying one thing while meaning another. Originating centuries ago in a Muslim world dominated by Sunnis, minority Shiites used it as a tool in their struggle for survival, achieving objectives otherwise unobtainable. In 21st century negotiations, taqiya results in conflicting assessments by Westerners as to what Iran’s Shiite leaders are actually putting on the table.

Gold tells how the tactic was employed early in the Islamic Revolution as Ayatollah Ruhollah Khomeini, trying to broker international support for his return to Iran and the Shah’s expulsion, represented he had no desire to rule Iran. The picture painted was of a religious leader who would be Iran’s Mahatma Gandhi, ensuring stability in the region and a better life for the Iranian people. Gold points out even U.S. Ambassador to the U.N. Andrew Young went so far as to suggest Khomeini was “some kind of saint.” But, upon his arrival in Iran, Supreme Leader Khomeini immediately transitioned from Mahatma Gandhi to Attila the Hun, ruling the country for a decade with an iron Islamist fist.

2.) Gold surmises negotiations by Western powers using diplomatic engagement to stop Iran’s nuclear weapons march have failed too because they never understood the true driving force behind the mullahs’ thinking. He says successive U.S. administrations “totally misread Iran’s revolutionary leadership, underestimating the deep enmity of the Iranian regime and its uncompromising commitment to its confrontational revolutionary ideology.” The mullahs rule with blinders -- and will not be denied their destiny to spread their revolutionary ideology globally. But this destiny, Gold explains, is cemented by a dark side.

Iran’s top two leaders, Supreme Leader Ali Khamenei and President Mahmoud Amadinejad, firmly anticipate the imminent return of Islam’s 12th Imam -- the “Mahdi” -- who disappeared eleven centuries ago at age six. Ahmadinejad believes his term in office will end as he turns Iran over to the Mahdi. While the Mahdi’s return is an Islamic belief, tradition adheres to a natural evolution for his reappearance; however, Ahmadinejad believes he is a catalyst in expediting the return by creating the world chaos necessary to trigger it. The belief is such chaos involves the death, initially, of at least one third the world’s population, to be followed by another third. But the end result is a world ruled by Sharia law.

3.) Gold points out, as years passed and the West chose continued diplomatic engagement rather than fully confronting Iran’s deceptive diplomacy. Tehran had no incentive to change its approach. Following the seizure of the U.S. Embassy in Tehran in 1979, Ayatollah Khomeini bragged, “The Americans can’t do a damn thing.” He argues Iran perceives these words have rung true ever since. For even after collecting evidence of Iranian involvement in two major attacks against the U.S. -- the 1983 Beirut bombing of the Marine Barracks and the 1996 Khobar Towers bombing in Saudi Arabia -- Iran never paid a price for its terrorist acts.

Gold painstakingly documents how the mullahs, after securing control of Iran, sought to export revolution outside its borders. He richly details with dates and names, event after event, including the establishment of terrorist networks such as Hizballah, that became fronts for Tehran, doing Iran’s extraterritorial bidding.

This bidding included assassinations, kidnappings, hijackings and bombings, primarily in the Middle East and, more recently, in Iraq. But, employing taqiya, Tehran disavowed any relationship to the groups. Investigations took years to complete. Some showed involvement by Iran at the highest levels. Again, however, as Gold details, victim states exercised restraint in taking punitive action as, periodically, Iran appeared to be moderating its extremist mindset. Unbeknownst to the West, however, such appearances were simply taqiya gamesmanship.

For example, encouraged by Iranian presidential elections bringing perceived moderates Ali Akbar Hashemi Rafsanjani and Mohammad Khatami to power, Washington failed to hold them accountable for previous transgressions. While Tehran succeeded in painting these leaders as moderates, it was under their leadership that Iran’s nuclear weapons and missile delivery programs actually made substantial progress.

One comes to the shocking reality in reading Gold’s book that not a single U.S. administration, Democrat or Republican, has succeeded in reducing Tehran’s threat to regional security. Yet, for 30 years, Iran’s mullahs have methodically moved closer to achieving their objective of becoming an hegemonic power within the region, fostering instability throughout the Middle East in the process.

Gold notes President Obama took office with renewed faith and optimism in the power of engagement. But, he cautions, diplomatic engagement alone will not work. He cites the 2003 freeze by Tehran of its nuclear enrichment program as an example of limited success -- only because of the pending U.S. invasion of Iraq. But for the threat to the mullahs’ existence, the freeze would not have occurred.

Gold surmises, as much instability as Iran has generated in the region, it will only increase should Iran become nuclear-armed. While an emboldened Tehran would probably not launch a nuclear strike against the West, it would step up terrorist acts by proxies, promising them protection under its nuclear umbrella.

In 2004, President George Bush -- observed carrying former Soviet “refusenik” Anatoly Shransky’s The Case for Democracy -- stimulated book sales and a better understanding of the power of democracy. Were President Obama observed carrying Gold’s book, the American people would be well served by stimulating a better understanding of the grave danger a nuclear-armed Iran poses to global security -- a reality that may be less than a year away.

James Zumwalt is a retired Marine who served in the Vietnam and Gulf wars. He has written opinion pieces on foreign policy, defense and security issues for dozens of newspapers. He is president of his own security consulting company.
Posted by jtf at 10:15 AM