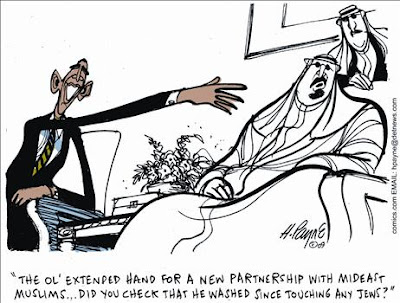 President Obama repeatedly insists that American foreign policy be conducted with modesty and humility. Above all, there will be no more "dictating" to other countries. We should "forge partnerships as opposed to simply dictating solutions," he told the G-20 summit. In Middle East negotiations, he told al-Arabiya, America will henceforth "start by listening, because all too often the United States starts by dictating."

An admirable sentiment. It applies to everyone -- Iran, Russia, Cuba, Syria, even Venezuela. Except Israel. Israel is ordered to freeze all settlement activity. As Secretary of State Hillary Clinton imperiously explained the diktat: "a stop to settlements -- not some settlements, not outposts, not natural-growth exceptions."

What's the issue? No "natural growth" means strangling to death the thriving towns close to the 1949 armistice line, many of them suburbs of Jerusalem, that every negotiation over the past decade has envisioned Israel retaining. It means no increase in population. Which means no babies. Or if you have babies, no housing for them -- not even within the existing town boundaries. Which means for every child born, someone has to move out. No community can survive like that. The obvious objective is to undermine and destroy these towns -- even before negotiations.

To what end? Over the past decade, the U.S. government has understood that any final peace treaty would involve Israel retaining some of the close-in settlements -- and compensating the Palestinians accordingly with land from within Israel itself.

That was envisioned in the Clinton plan in the Camp David negotiations in 2000, and again at Taba in 2001. After all, why expel people from their homes and turn their towns to rubble when, instead, Arabs and Jews can stay in their homes if the 1949 armistice line is shifted slightly into the Palestinian side to capture the major close-in Jewish settlements, and then shifted into Israeli territory to capture Israeli land to give to the Palestinians?

This idea is not only logical, not only accepted by both Democratic and Republican administrations for the past decade, but was agreed to in writing in the letters of understanding exchanged between Israel and the United States in 2004 -- and subsequently overwhelmingly endorsed by a concurrent resolution of Congress.

Yet the Obama State Department has repeatedly refused to endorse these agreements or even say it will honor them. This from a president who piously insists that all parties to the conflict honor previous obligations. And who now expects Israel to accept new American assurances in return for concrete and irreversible Israeli concessions, when he himself has just cynically discarded past American assurances.

The entire "natural growth" issue is a concoction. Is the peace process moribund because a teacher in the Jewish Quarter of Jerusalem is making an addition to her house to accommodate new grandchildren? It is perverse to make this the center point of the peace process at a time when Gaza is run by Hamas terrorists dedicated to permanent war with Israel and when Mahmoud Abbas, having turned down every one of Ehud Olmert's peace offers, brazenly declares that he is in a waiting mode -- waiting for Hamas to become moderate and for Israel to cave -- before he'll do anything to advance peace.

In his much-heralded "Muslim world" address in Cairo yesterday, Obama declared that the Palestinian people's "situation" is "intolerable." Indeed it is, the result of 60 years of Palestinian leadership that gave its people corruption, tyranny, religious intolerance and forced militarization; leadership that for three generations rejected every offer of independence and dignity, choosing destitution and despair rather than accept any settlement not accompanied by the extinction of Israel.

That's why Haj Amin al-Husseini chose war rather than a two-state solution in 1947. Why Yasser Arafat turned down a Palestinian state in 2000. And why Abbas rejected Olmert's even more generous December 2008 offer.

In the 16 years since the Oslo accords turned the West Bank and Gaza over to the Palestinians, their leaders built no roads, no courthouses, no hospitals, none of the fundamental state institutions that would relieve their people's suffering. Instead they poured everything into an infrastructure of war and terror, all the while depositing billions (from gullible Western donors) into their Swiss bank accounts.

Obama says he came to Cairo to tell the truth. But he uttered not a word of that. Instead, among all the bromides and lofty sentiments, he issued but one concrete declaration of new American policy: "The United States does not accept the legitimacy of continued Israeli settlements," thus reinforcing the myth that Palestinian misery and statelessness are the fault of Israel and the settlements.

Blaming Israel and picking a fight over "natural growth" may curry favor with the Muslim "street." But it will only induce the Arab states to do like Abbas: sit and wait for America to deliver Israel on a platter. Which makes the Obama strategy not just dishonorable but self-defeating.

letters@charleskrauthammer.com
Posted by jtf at 6:48 AM