July 4, 1776. December 7, 1941. September 11, 2001. These dates that were seared into hearts and minds of the collective American consciousness now seem -- to some -- distant, faded, even unimportant. But those who care to learn from history will always remember them, and teach their children.

There remains one other date in American -- no, world history -- that signifies good over evil, freedom over tyranny, liberty over oppression.

As you read this, 65 years ago almost to the exact day, tens of thousands of scared young American soldiers were crammed together on landing craft in the English Channel heading for the beaches of Normandy, France. Their mission: save the world. Though they surely didn't know it, these young men in all those landing craft would be forever known in American history as the Greatest Generation.

Just prior to the invasion that would ultimately liberate Europe and save civilization from the dark evil of Nazism, General Eisenhower, Supreme Allied Commander, transmitted a message to the young men who would fight and die in the coming hours. It read in part: You are about to embark upon the Great Crusade, toward which we have striven these many months. The eyes of the world are upon you. The hopes and prayers of liberty-loving people everywhere march with you. 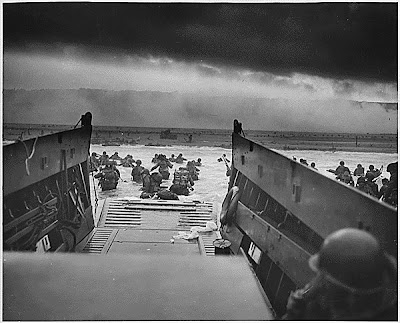 The American dead and wounded on Omaha beach was so severe that American commanders considered abandoning the beach. But what our commanders had not counted on was the tenacity and fighting spirit of the Greatest Generation. Just as the firemen on 9/11 kept rushing up the stairs of the burning Twin Towers into the hands of God, the landing craft full of American infantry kept coming.

Those young Americans who stormed Omaha beach on that morning 65 years ago on June 6th accomplished their mission: they saved the world.

June 6 is D-Day. Do not ever forget this day. Teach your children, make sure no one forgets how good wins over evil and the price that is paid. God bless the warriors.

Rock legend Ted Nugent is noted for his conservative political views and his vocal pro-hunting and Second Amendment activism. His smash bestseller Ted, White & Blue: The Nugent Manifesto, is now available at www.amazon.com. Nugent also maintains the Official Ted Nugent Site at www.TedNugent.com.
Posted by jtf at 7:45 AM