In the wake of the shooting of late-term abortionist George Tiller, President Barack Obama sent out a welcome message that this nation would not tolerate attacks on pro-lifers or any other Americans because of their religion or beliefs. 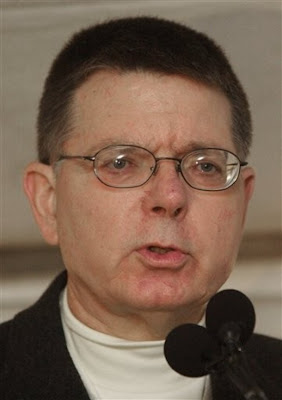 Ha ha! Just kidding. That was the lead sentence -- with minor edits -- of a New York Times editorial warning about theoretical hate crimes against Muslims published eight months after 9/11. Can pro-lifers get a hate crimes bill passed and oceans of ink devoted to assuring Americans that "most pro-lifers are peaceful"?

For years, we've had to hear about the grave threat that Americans might overreact to a terrorist attack committed by 19 Muslims shouting "Allahu akbar" as they flew commercial jets into American skyscrapers. That would be the equivalent of 19 pro-lifers shouting "Abortion kills a beating heart!" as they gunned down thousands of innocent citizens in Wichita, Kan.

According to recent polling, a majority of Americans oppose abortion -- which is consistent with liberals' hysterical refusal to allow us to vote on the subject. In a country with approximately 150 million pro-lifers, five abortionists have been killed since Roe v. Wade.

In that same 36 years, more than 49 million babies have been killed by abortionists. Let's recap that halftime score, sports fans: 49 million to five.

Meanwhile, fewer than 2 million Muslims live in America and, while Muslims are less murderous than abortionists, I'm fairly certain they've killed more than five people in the United States in the last 36 years. For some reason, the number "3,000" keeps popping into my head.

So in a country that is more than 50 percent pro-life -- and 80 percent opposed to the late-term abortions of the sort performed by Tiller -- only five abortionists have been killed. And in a country that is less than 0.5 percent Muslim, several dozen Muslims have killed thousands of Americans.

But the killing of about one abortionist per decade leads liberals to condemn the entire pro-life movement as "domestic terrorists." At least liberals have finally found some terrorists they'd like to send to Guantanamo.

Tiller bragged about performing 60,000 abortions, including abortions of viable babies, able to survive outside the mother's womb. He made millions of dollars performing late-term abortions so gruesome that only two other abortionists -- not a squeamish bunch -- in the entire country would perform them.

Kansas law allows late-term abortions only to save the mother's life or to prevent "irreversible physical damage" to the mother. But Tiller was more than happy to kill viable babies, provided the mothers: (1) forked over $5,000; and (2) mentioned "substantial and irreversible conditions," which, in Tiller's view, apparently included not being able to go to concerts or rodeos or being "temporarily depressed" on account of their pregnancies.

In return for blood money from Tiller's profitable abattoir, Democrats ran a political protection racket for the late-term abortionist.

In 1997, The Washington Post reported that Tiller attended one of Bill Clinton's White House coffees for major campaign contributors. In addition to a $25,000 donation to Clinton, Tiller wanted to thank him personally for 30 months of U.S. Marshals' protection paid for by the U.S. taxpayer.

Kansas Democrats who received hundreds of thousands of campaign dollars from Tiller repeatedly intervened to block any interference with Tiller's abortion mill.

Kathleen Sebelius, who was the governor of Kansas until Obama made her Health and Human Services Secretary, received hundreds of thousands of campaign dollars from Tiller. Sebelius vetoed one bill restricting late-term abortions and another one that would have required Tiller to turn over his records pertaining to "substantial and irreversible conditions" justifying his late-term abortions.

Kansas Attorney General Paul Morrison also got elected with the help of Tiller's blood money, replacing a Republican attorney general who was in the middle of an investigation of Tiller for various crimes including his failure to report statutory rapes, despite performing abortions on pregnant girls as young as 11.

But soon after Morrison replaced the Republican attorney general, the charges against Tiller were reduced and, in short order, he was acquitted of a few misdemeanors. In what is a not uncommon cost of doing business with Democrats, Morrison is now gone, having been forced to resign when his mistress charged him with sexual harassment and corruption.

Tiller was protected not only by a praetorian guard of elected Democrats, but also by the protective coloration of the Evangelical Lutheran Church in America -- coincidentally, the same church belonged to by Tiller's fellow Wichita executioner, the BTK killer.

I wouldn't kill an abortionist myself, but I wouldn't want to impose my moral values on others. No one is for shooting abortionists. But how will criminalizing men making difficult, often tragic, decisions be an effective means of achieving the goal of reducing the shootings of abortionists?

Following the moral precepts of liberals, I believe the correct position is: If you don't believe in shooting abortionists, then don't shoot one.
Posted by jtf at 5:06 AM

How interested is the ELCA in saving souls? Is it interested in Scott Roeder's soul? Does it possess a humility and love of Christ to set up a prison mission for Roeder? And if it does, will it give him God's word of Law and Gospel in order to bring Roeder to repentance, or feed him a counterfeit Gospel, that same enabling grace that nourished Tiller's belief system?