Frog in Hand (Worth Two Glances)

VENICE — This dazzling city got a new landmark this week, an eight-foot-tall sculpture of a boy holding a frog, by the American artist Charles Ray.

Prominently situated outdoors on the very tip of the Punta della Dogana on the Grand Canal, it has already become a signpost for Venice’s newest contemporary art space. 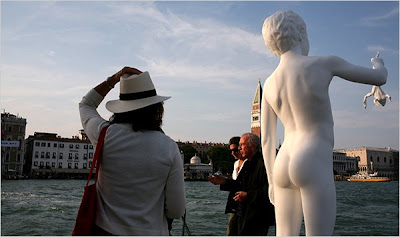 Charles Ray’s “Boy With Frog” was unveiled on Wednesday to commemorate the opening of the Dogana on the Grand Canal. More Photos >

Two years ago François Pinault, the French luxury goods magnate and art collector who owns Christie’s, beat out the Solomon R. Guggenheim Foundation for the 17th-century Dogana, the former customs house, signing a 33-year agreement with the City of Venice to transform it into a gallery to show off his enormous collection. In 2004 he bought the 18th-century Palazzo Grassi and hired the Japanese architect Tadao Ando to renovate the building. It opened in 2007 filled with work by Jeff Koons, Takashi Murakami, Rudolf Stingel and others.

Mr. Ando has also renovated the Dogana. To commemorate its opening on Wednesday, Massimo Cacciari, the mayor of Venice, unveiled Mr. Ray’s “Boy With Frog.”

At sunset that evening, at a cocktail party in his honor on a terrace overlooking the sculpture, Mr. Ray discussed the piece. “He’s a classic model,” he said of the boy, a family friend of about 12 who posed for him. “He’s not presenting the frog to Venice but just looking at it as if he’s just lifted it from the water.”

Mr. Ray grappled with the issue of how tall to make the sculpture. “I made three foam models,” he said, “one 14 feet tall, one life size and one 8 feet tall, and brought them to the site.” He decided on the eight-foot version after talking to several Venetians, who told him how walking around the Dogana has long been a favorite with locals.

“I was haunted by that conversation,” Mr. Ray said. “This is the place where couples have fights, break up, get engaged and have their first kiss.” He said he realized it had to be a height pedestrians could relate to, not some monumentally scaled, imposing figure.

As the sculpture was being unveiled on Wednesday, a motorboat anchored nearby was decorated with balloons holding up a banner that read, “Mr. Pinault Please Buy My Art.”

Over the years having works in the Pinault collection has helped many artists’ careers. His connection to Christie’s and his reputation as a collector can raise the profile of the artists whose work he owns.

The two sites are different: the Palazzo Grassi is more domestic, with smaller rooms, while the Dogana has grander spaces for large-scale works. In his Dogana renovation, Mr. Ando left the wooden beams and worn brick walls exposed. “It was the building itself that dictated the installation,” Mr. Pinault said, of the project, which cost nearly $30 million.

The inaugural exhibition, “Mapping the Studio,” features works by artists he has collected over the years: Britons like Rachel Whiteread and Jake and Dinos Chapman; Americans including Cy Twombly, Richard Prince and Bruce Nauman; and the Swiss team Fischli & Weiss.

Some works were bought for his collection; others, like Mr. Ray’s sculpture, were commissioned for the building. The curators Alison Gingeras and Francesco Bonami (who is also curator of the next Whitney Biennial) are responsible for the installation, which also includes suites of works by a single artist. Two years ago, for example, Mr. Pinault bought a group of seven dark abstract translucent canvases — a triptych and six individual paintings — by Sigmar Polke that have a space to themselves.

“It’s the same idea as the Rothko Chapel in Houston,” Mr. Pinault said as he walked through the building this week. When he got to a room filled with paintings by Marlene Dumas, he paused at “Dora Maar, the Woman Who Saw Picasso Cry,” a 2008 portrait of Picasso’s muse and lover. “The title is wrong,” he said with a wink. “I don’t think Picasso ever cried.”

This week’s opening was a milestone for Mr. Pinault, who for nearly a decade has been consumed with the notion of presenting his collection to the public. But his original idea did not include Venice. In 2000 he announced plans to open the François Pinault Foundation for Contemporary Art on the Île Seguin, an island in the Seine in Paris. But five years and $24 million later he abandoned the project, saying that the local government made it impossible. (At the time critics were opposed to a vanity museum, especially one with almost no French artists.)

What will the French say now? “I hope they think it’s a good collection,” Mr. Pinault said. “And that it will give people another reason to come to Venice.”

The California artist John Baldessari first came to Venice in the early 1970s, when he was invited to show his works in a Biennale. He recalled, “I slept on top of a Volkswagen bus parked in the Giardini,” the shaded gardens that have been home to the Biennale for well over a century.

This year he is back, ensconced in a hotel and no longer considered part of the avant-garde. At 78 he is one of two winners of the Golden Lion Award, a lifetime achievement prize he is sharing with Yoko Ono.

A Santa Claus look-alike, with snow-white hair, a bushy beard and a hulking 6-foot-7 frame, Mr. Baldessari was hard to miss the other day. He was standing in front of what has long been called the Italian pavilion but this year has been renamed the Palace of Exhibitions, an 1895 colonnaded structure that is the first thing visitors see when they walk through the Giardini’s iron gates. An anchor of sorts, the building is a familiar meeting place amid the labyrinth of national pavilions. It is also here that the artistic director presents a special exhibition.

For the first time the pavilion is no longer white. From a distance the structure seems a cool sky blue. But close up a vista reveals itself: Mr. Baldessari has wallpapered the top half of the pavilion with a photographic image that resembles a sun-dappled sky and the bottom half with an image of a calm rippled sea. At either end of the building stands a tall pair of palm trees, also part of his wallpaper handiwork.

“It looks like a faux Roman villa, something from Malibu,” he said.

When Daniel Birnbaum, the Biennale’s artistic director, asked Mr. Baldessari if he wanted to create a work inside the pavilion or out, he immediately opted for the facade.

The choice is vintage Baldessari. For the last five decades he has continually reinvented himself, working in a variety of mediums including painting, photography, books, sculpture and exhibition design, all the while taking inspiration from art history and mass media.

“I had just finished this architectural project in Krefeld, Germany, with a Mies van der Rohe house, and I was in the frame of mind to continue doing something architectural,” he said.

At first he proposed painting on the facade the words “No More Boring Art,” a signature phrase he first used in 1971. (A banner with that sentence hangs off Ca’ Giustinian, a nearby palazzo on the Grand Canal.) But the idea didn’t fly with the Biennale’s organizers.

“They thought some of the artists would have thin skins and think I was talking about them,” he said. Then he suggested placing the phrases “Greetings From” or “Welcome to” above his sky and seascape so it would look just like a postcard. But that idea was shot down too.

“I still hope that instead of sending postcards, people will take a picture of this,” Mr. Baldessari said. “And then e-mail it to their friends.”
Posted by jtf at 3:09 PM