A Little Battle for Notre Dame

President Obama and the soul of a Catholic University. 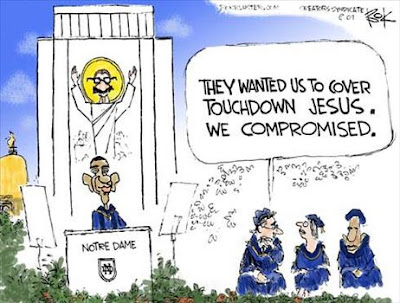 South Bend, Ind. — As he has done every year for a quarter-century, Bishop John Michael D’Arcy told Notre Dame's graduating class of 2009 about how he received no honors whatsoever when he graduated. It is a speech he gives at the school’s baccalaureate mass on the night before commencement, and most faculty members know it by heart. D’Arcy requests (and always receives) a loud round of applause for the non-honorees of each year's graduating class.

But a very different sort of honor was on D’arcy’s mind this year. On Saturday evening, the bishop of the Fort Wayne–South Bend Diocese urged a crowd of more than 200 students, along with their parents, faculty, and alumni, to pray for Pres. Barack Obama’s conversion on the issue of abortion.

Speaking at the university’s replica Lourdes grotto, he told NRO that he was deeply concerned about the honor that the university would present the following day to President Obama, arguably the most ardent and least apologetic defender of legal abortion-on-demand ever to hold the United States presidency.

“This is not a Democrat and Republican thing,” said D’Arcy. “It’s not so much about the president, really. The president was elected. He’s going to do what he’s going to do, some of which I think is probably very good. But on this issue, he’s doing what he promised, which is sad. . . . This is about giving an honor to someone whose position on this, not just as president, but even before that, is so antithetical to everything we believe in. . . . It’s a deep wound for Notre Dame.”

From some of the coverage, you might get the impression that the fight over President Obama’s invitation to Notre Dame was the “circus” that had been promised by Operation Rescue founder Randall Terry. And news organizations did pick up many images of arrests, of Alan Keyes pushing a blood-covered doll in a baby carriage, and of the airplane that has circled campus for weeks now, dragging a banner behind it with the picture of an aborted baby.

But as Bishop D’Arcy put it, “We’re not joining up with the people who are making it a circus. I’ve tried to distance the Catholic Church from that.”

In fact, it was the resistance to Obama’s appearance from within the university community that mattered most on graduation day. Every indication on campus suggested that it created a minor crisis. Every important speech at graduation was dominated by the controversy, rather than by a discussion of graduates’ futures.

The student group ND Response formed quickly after the mid-March announcement of Obama’s speech, and its student leadership quickly honed the message: Notre Dame is creating a scandal and endangering its Catholic identity by granting Obama a place of honor and an honorary law degree, in direct contradiction to the American bishops’ instructions for Catholic universities. As one of the group’s earliest releases stated, “To award a Notre Dame law degree to a lawyer and politician who has used the law to deny equality to the unborn diminishes the value of the degree itself.”

ND Response criticized and engaged the university’s administration both on the campus and in the national press. They organized protests and prayer meetings on campus, and arranged for students and faculty to sit for interviews from cable and network news and make their case.

“We came together in the hours following the announcement and decided that we needed to make some kind of a statement,” said Chris Labadie, chairman of ND Response. “The problem is that he’s been invited to give a speech and to receive an honor from the university, an honorary doctorate of laws. As a Catholic university, it seems that we’re honoring his work as it pertains to life issues.”

Several professors, including priests of Notre Dame’s Holy Cross order, became active in promoting and arguing for the students’ cause. “This is not an academic-freedom matter,” said Rev. William Miscamble, a professor of history. “If President Obama wanted to come to Notre Dame and engage in a genuine exchange on life questions, that would be all to the good. But of course, that’s not the event we’re going to experience at commencement. He’s coming to this privileged forum, he’s going to receive an honorary doctorate of laws. And by this action, Notre Dame is saying that we don’t really think that these questions — such as abortion, such as the stem-cell issue — matter that much.”

Even some university administrators sympathized, with a handful of recognizable figures attending ND Response events over the weekend. Few wanted to discuss the issue publicly, however. "It has been made clear that dissenting publicly won’t be tolerated,” said one administrator who requested anonymity.

The university reacted to ND Response by distributing talking points for mollifying angry callers and by attempting to mollify student objectors. They consciously held up their Laetare Medal winner, Mary Ann Glendon, as someone who would bring balance to the commencement event and negate any possible ill-effects of the president’s presence.

But the students pressed their point, demanding a public forum for dialogue with university president John Jenkins (he refused on April 14 and rescinded his earlier offer of a private meeting). In late April, Glendon declined the Laetare Medal, stating that she felt she was being used. The Vatican was not silent either, as Archbishop Raymond Burke, prefect of the Catholic Church’s Apostolic Signatura, denounced the invitation as “a source of the gravest scandal.” Bishop D’Arcy, never known as a confrontational figure, suddenly became an outspoken critic. By the time of Obama’s May 17 speech, some 75 other Catholic bishops had joined him.

The steadfast objections by all of these university stakeholders gave the lie to any idea that this controversy was merely an obsession of outside agitators carrying pictures of aborted fetuses. ND Response members, although relatively small in number, had a loud voice and public support from senior university officials and tenured faculty, and dozens of bishops repeated their message. As Bishop D’Arcy put it on Saturday night, a good number of people associated with Notre Dame see the same problem he does with Obama’s appearance. “If there’s a rift, it’s more between the administration and the Church, not between Notre Dame and the Church,” D’Arcy said, pointing to those who had come to pray. “You see Holy Cross priests here. You see lay people who are faculty members. You see students.”

This is why, on graduation day, the controversy over Obama’s presence dominated the entire commencement ceremony. Dozens of graduates wore mortarboards bearing either the “O” symbol of the Obama campaign or the cross and baby’s feet of ND Response. Dozens of students from ND Response boycotted, holding a separate ceremony in protest on the university’s South Quad, joined by hundreds of family members, priests, and faculty.

President Obama, beset by three hecklers (none of them students) who rudely interrupted him, had to spend several minutes addressing the controversy, as did Father Jenkins, who introduced him. So did Judge John Noonan, who spoke in the slot left empty by the Laetare Medal winner. “We can recognize goodness in our nation’s president without defending all of his multitudinous decisions,” said Noonan. Having attended four Notre Dame commencements (including my own), I can remember no other in which controversy over a graduation speaker became the main subject of every important speech at graduation.

In his speech at commencement, Father Jenkins said that America is depending upon Notre Dame to produce graduates “grounded in deeply held moral values . . . who can help solve the world’s toughest problems.”

Notre Dame sent another clear message to its new graduates by honoring a politician who has spent his entire career resisting even the smallest legal protection for the unborn. To tomorrow’s Catholic leaders, Notre Dame has said that the direct and deliberate taking of innocent human life through abortion is just one issue among many, and nothing worth getting too upset about.

— David Freddoso is a National Review Online staff reporter and author of The Case Against Barack Obama.
Posted by jtf at 5:02 PM