Terry Eagleton’s Reason, Faith, and Revolution: Reflections on the God Debate is an engaging, witty, and largely successful critique of the new atheists, especially Christopher Hitchens (author of God is Not Great) and Richard Dawkins (author of The God Delusion), whose delusional grandiosity earns them the hybrid nickname Ditchkens. The text of his Terry Lectures at Yale, Eagleton’s book has received smart, generally warm reviews in recent days from Andrew O’Hehir at Salon and from Stanley Fish on his NY Times blog, Think Again. The book certainly merits our attention both for its hilarious send-up of the pompous Ditchkens and for its less successful attempt to infuse revolutionary politics with the spirit of the gospel. 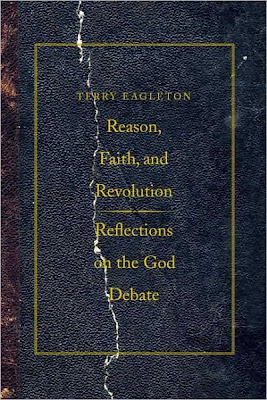 Eagleton’s devastating critique focuses on Hitchens and Dawkins’ theological illiteracy, ignorance of how science works, and naive faith in rational progress. The crisis of Enlightenment reason, which was apparent to secular philosophers long before it became part of the popular Christian response to modernity, is little noted in Ditchkens. Having exalted himself above nature and placed himself at the high point of history, Enlightenment man falls prey to the chief “bourgeois fantasy,” that of the “self-authorship.” He can “extract from the world only the values he has placed in it.” The deracination of traditional sources of meaning in our increasingly rational civilization sends citizens scurrying to the realm of culture. The privatization of sex, art, and religion has freed these up as sources of cultural meaning independent of politics and as weapons of political critique, but at a great cost. Their “isolation from the public world causes them to become increasingly pathologized.”

Civilization, Eagleton insists, never fully leaves barbarism behind; purely instrumental, technical reason, having no roots in anything other than itself, can easily generate barbarism. Even science has roots; following a host of contemporary philosophers of science, Eagleton argues that science is built on assumptions, on a certain kind of faith. Even as it bestows enormous benefits—political, scientific, medicinal—modernity occludes from view certain incorrigible features of the human condition. Ditchkens is forced to treat the non-religious political horrors of the twentieth century as mere blips in the unfolding of evolutionary progress.

The only rational response to modernity, in Eagleton’s eminently reasonable view, is an emphatic yes and no. Narrow polemics force Ditchkens into dogmatic cheerleading, a dogmatism that generates the other of fundamentalism, whose irrationality only serves to confirm the original dogmatism.

To view the complete article click on the link below:

Thomas Hibbs is the distinguished professor of ethics and culture and dean of the Honors College at Baylor University.
Posted by jtf at 8:21 AM