Bruce Springsteen and the E Street Band became notorious for working at a glacial pace. What longtime fan will forget the interminable three-year wait between "Born to Run" and "Darkness on the Edge of Town" or, for a more absurd example, the 18 years between "Tunnel of Love" and "The Rising"?

So it was a shock when after the politically intense and acclaimed "Magic" in 2007 and a tour that ran through late summer of 2008, it was announced that Springsteen had a new album ready for the week of the Super Bowl appearance earlier this year, and a spring tour pending. 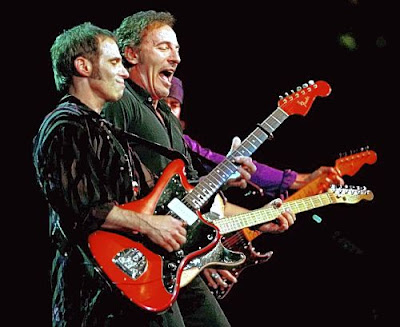 The strange thing about the sold-out show at the Mellon Arena Tuesday night is that the "Working on a Dream" tour no longer seems to be about "Working on a Dream." Although the record debuted at No. 1 on the charts, it doesn't seem to be a favorite among Boss fans, and Springsteen, always the savvy showman, has chosen not to shove it down anyone's throat.

"I think Bruce has kind of set a precedent traditionally as an artist where he'll come out and do six to nine things from a new album," says E Street guitarist Nils Lofgren. "And we started out doing five or six things, and then as the shows have gone on, we've cut down sometimes to three or four. To me, I think people are overthinking it. It's funny, on the 'Magic' tour, on the blogs, you got people whining that we're doing nine songs from the new album and they wanted to hear more old stuff. Now you got people whining we're doing three to five from the new album and they want to hear more new stuff."

The Asbury Park rehearsal show and a few after that included new songs like "This Life," "Good Eye" and "My Lucky Day" -- they didn't even mess with the much-derided "Queen of the Supermarket" -- but they were dropped after a few shows in favor of back catalog and a series of recession-related songs in "Seeds," "Johnny 99" and "The Ghost of Tom Joad."

The other new wrinkle is a game with the audience that dates back to the end of the last tour where crowd members would arrive with handwritten signs of what songs they wanted to hear.

"Bruce started going to the audience and collecting signs and he would come up on stage with a pile of about 30, and then he'd start rifling through them," Lofgren says. "It's forever imprinted on me the vision of the college kids looking for the one clean shirt in a dirty laundry pile. He'd find a sign he liked and he'd show it to us. A lot of times it was one of his songs. Sometimes it was a cover. But that was an improv thing, a little beyond the normal.

"Normally, Bruce will change the show a bit, sometimes you'll hear two to eight audibles. And sometimes they're what you talk about at the sound check, sometimes they're not. It's always a surprise, including to him. But with the sign thing, it started a new improv nature that got to the point where the last two months of the last tour, I got annoyed to get a set list 'cause it was useless. He started changing the opening number on the way to the stage."

In the past few weeks, it's turned into the old Stump the Band, like Johnny Carson's "Tonight Show" band used to do (if you Google "Stump the Band" right now, Springsteen comes up seventh). In Atlanta a few weeks ago, they got a "96 Tears" sign, to which Springsteen said, "They think they're gonna stump the band -- but this is the greatest bar band in the land, and if they don't think we know 96 [expletive] Tears ..." There's also been a run of punk covers including The Ramones' "I Wanna Be Sedated" and The Clash's "London Calling," plus ZZ Top's "I'm Bad I'm Nationwide."

"Bruce likes the fact that it's hard to stump the E Street Band and he's brave enough to learn a song we don't know on stage and try to play it," Lofgren says. "I don't recall any bands ever doing that that I saw, and I've been going to shows for 45 years. Because we were so sharp, after playing 50 shows on the last tour, by the last 20 to 30, he realized we could improv the whole night and the band could handle it and it kind of challenged him not just to improv three hours but have it build and that's very difficult work, mentally, while you're trying to stay zoned out in the music. It was just a challenge that he accidentally found to engage himself and us ...
"Stuff like 'You Really Got Me,' we played in bar bands as kids. 'Hang on Sloopy' I used to play every night on my '83 Wonderland tour. A lot of these things are familiar, but we just haven't played them together."

The other development on the Working tour is the appearance of Son of Max -- Jay Weinberg -- who has been sitting behind the drums for a portion of the shows. The 18-year-old, who only has been playing drums for four years, will be needed for some of the European shows when his dad is committed to his other gig, "Late Night With Conan O'Brien."

"He's doing a great job for any drummer, let alone 18," Lofgren says. "He has a great mentor there in his father."

Lofgren knows what it's like to fill in, having joined Springsteen's band originally to replace Steve Van Zandt (who later returned) and Neil Young's Crazy Horse after the death of Danny Whitten.

"When I first joined the E Street Band, I didn't worry about Nils. I worried about what Steve and Bruce were doing. Then after 20 shows, I remember thinking I got what's needed and I'm internally connected enough that if I get an idea I know it's going to be true to the emotional content of what Bruce needs from me. That's something you can't rush or force. But hey, it's rock 'n' roll. It's a powerful, powerful band and the drums is the engine of any band. They're big shoes to fill and Jay is doing a great job."

During the brief downtime between the end of the "Magic" tour and the Super Bowl (sorry about your Cardinals, Nils), the 57-year-old Lofgren underwent hip replacement surgery and kept busy promoting "The Loner: Nils Sings Neil," his album of Neil Young covers. He also worked on guitar instruction videos that are available on his Web site. When Bruce calls, though, he's always ready to take his spot in the E Street Band.

Scott Mervis can be reached at smervis@post-gazette.com or 412-263-2576. For more from the Nils Lofgren interview, see the Pop Noise blog at post-gazette.com.