A New Era of Govt-Controlled Business? 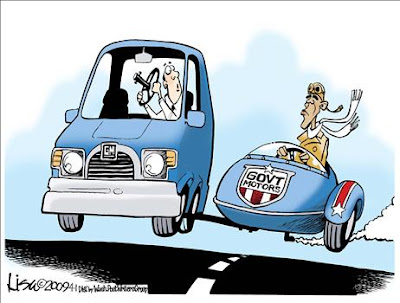 Team Obama fired GM CEO Rick Wagoner Sunday afternoon, just a short time after Treasury man Tim Geithner told the television talk shows that some banks will need large amounts of new TARP-money government assistance -- even though the bankers don't want it. Does this smack of big-time government planning and industrial policy? Another lurch to the left for economic policy?

Remember, as bad as Wagoner's performance has been over the years, it was the federal government -- not shareholders or the board of directors -- that threw him under the bus. (By the way, GM's board is being thrown under that same bus.) And I'm not arguing in favor of Wagoner or his board; they've made a zillion mistakes. But I am wondering if we've officially entered a new era of government-controlled business.

Sen. Bob Corker (R., Tenn.), probably the most knowledgeable man in Congress about the car bailout, and someone who argued months ago in favor of a pre-planned government-sponsored bankruptcy for GM and Chrysler, calls the Wagoner firing "a major power-grab by the White House on the heels of another power-grab from Secretary Geithner, who asked last week for the freedom to decide on his own which companies are 'systemically' important to our country and worthy of taxpayer investment, and which are not." Corker calls this "a marked departure from the past," "truly breathtaking," and something that "should send a chill through all Americans who believe in free enterprise."

Mr. Corker has hit the nail on the head. And I think his idea of "a truly breathtaking" government departure from American free enterprise -- whether it's the banks or the bankrupt Detroit carmakers -- is exactly what caused stocks to plunge 250 points on Monday.

Incidentally, most of the big bankers who met with President Obama in the White House last Friday want to pay back their TARP money, not take more of it. But the Treasury is conducting stress tests that could stop the TARP pay-downs and force the banks to take more taxpayer funds in return for even more federal control.

The big bankers say they are profitable. And with an upward-sloping Treasury yield curve and some market-to-market accounting reform coming from the Financial Accounting Standards Board (FASB), the outlook for banks should be getting better, not worse. So why is the Treasury jamming more TARP money down bankers' throats, especially after announcing a new plan to use private capital to clean up bank balance sheets and solve the toxic-asset problem?

It kinda sounds like the Treasury doesn't want to let go of its new uber-regulator status.

Former SEC chair Richard Breeden is arguing against a systemic uber-regulator for banks, and in favor of special financial bankruptcy courts. Once again, the story is court-ordered restructuring, not government control by political bureaucrats who like their power so much they want to keep running the various companies in question.

And why isn't Obama's special auto task force ordering a replacement for Ron Gettelfinger, the UAW's president? Weren't their oversized pay and benefit packages a big part of the problem? Well, that's never gonna happen. The election power of the union is too strong. But this does reveal the political nature of these government bailout operations.

Incidentally, in President Obama's speech on Monday about the Wagoner firing, as well as in Treasury term sheets for GM and Chrysler, there are multiple references to "the next generation of clean cars," to new CAFE-standard mileage increases, and to green power-train developments. All this is a big green climate-change priority for the new administration.

But the simple fact is, small, tinny, and expensive green cars just don't work for consumers. And even if those cars are designed better, the cost structure of the carmakers will have to be brought down so far that UAW wages will be forced below those of the non-union shops in Detroit south (including Honda, Toyota, and other foreign carmakers who are now producing in the United States).

So add the green revolution to the industrial-policy plans of the White House. Expect a big increase in CAFE fuel standards, even though small cars are simply not profitable. And plan on bailout nation taking a new left-turn toward the kind of central planning that has held down economic growth in Europe and Japan for so very long.

Lawrence Kudlow is host of CNBC's The Kudlow Report and co-host of The Call. He is also a former Reagan economic advisor and a syndicated columnist. Visit his blog, Kudlow's Money Politics.
Posted by jtf at 11:27 AM