The Icon and the Battle-Axe 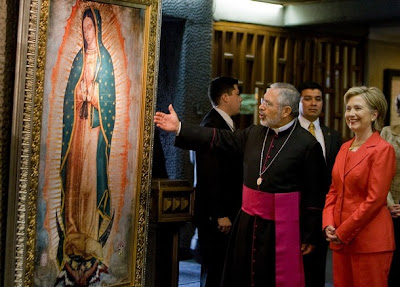 US Secretary of State Hillary Clinton listens to explanations from the Rector of the Basilica de Guadalupe, Diego Monroy, during a visit to the Basilica in Mexico City, on March 26, 2009. (Getty Images)


MEXICO CITY -- Imagine an American Secretary of State one morning praying at Jerusalem's Wailing Wall and the next evening accepting a eugenics award named for Dr. Josef Mengele.

That is an apt analogy to the repugnant juxtaposition of gestures by Hillary Clinton during and following her brief visit to Mexico last week.

Color photographs and loud captions atop page one of the daily El Universal captured the Mexican public's sense of outraged bewilderment at Mrs. Clinton's visit March 26 to the Basilica of Guadalupe, Catholicism's second most visited shrine after St. Peter's in Rome. The Basilica rector, Monsignor Diego Monroy, stands with Mrs. Clinton and shows her the mestiza Madonna whose story is known to every Catholic schoolchild, an image believed to have been imposed miraculously on an Indian's cloak five centuries ago.

HILLARY CLINTON: Who painted it?

La Guadalupana is the archetypal icon of Latin American Catholicism. Catholics in the United States as well as in the Latin countries today invoke the Virgin of Guadalupe as the special patron of the pro-life movement.

Was Hillary's public diplomacy fiasco a calculated insult addressed to something she regards as a superstition, or simply the unrehearsed utterance of a person so soulless that she cannot fathom believers' sense of mystery?

A clue to the answer came in the traveling diplomat's next stop after Mexico, Houston, where she accepted the Margaret Sanger Award from the Planned Parenthood Federation. 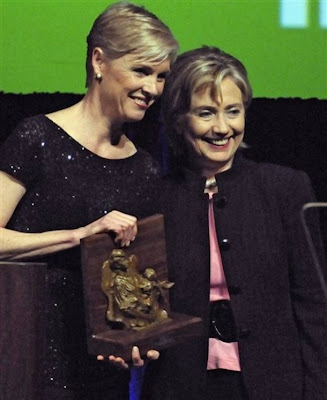 The comparison of Margaret Sanger (1879-1966) and Josef Mengele (1911-1979) is not overdrawn. Even a cursory examination of her life's work and pronouncements shows Sanger, the founder of Planned Parenthood, as one of the most strident and inhumane racists of the eugenics movement of the 1920s and 1930s. In April 1932, for example, she wrote an article urging "a stern and rigid policy of sterilization and segregation to that grade of population whose progeny is tainted, or whose inheritance is such that objectionable traits may be transmitted to offspring." Eugenics was a fashionable social policy panacea at that time not only in Hitler's Germany, but also among powerful elites in the United States and other Western democracies.

Hillary Clinton provides the latest manifestation of what Arthur Schlesinger Sr. called "the deepest bias in the history of the American people" and "the only remaining acceptable prejudice" -- anti-Catholicism.

Secretary Clinton's words and actions in Mexico and Houston are elaborations of the disconcerting words of President Obama's Inaugural Address, his pledge to "restore science to its rightful place and wield technology's wonders to raise health care's quality and lower its costs" and his gratuitous, unspecific slam against "worn out dogmas."

Nothing is more clear-cut than the chasm separating the Obama-Clinton ideology and programs from Christian faith and tradition and what Pope John Paul II, whose towering bronze image stands beside the Basilica here, called the Culture of Life.

(Mr. Duggan is writing and lecturing in Mexico City this spring.)

Joseph P. Duggan served in the Reagan State Department and as speechwriter to President George H.W. Bush. During the 1970s he was assistant managing editor of The American Spectator.
Posted by jtf at 8:06 AM