Doubling Down on the Welfare State

Get ready to pay twice for everything. 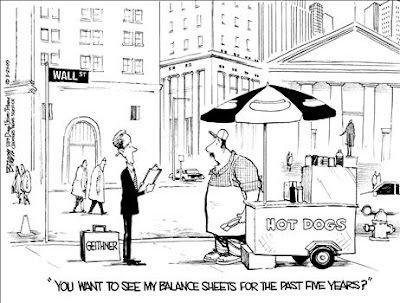 You may be surprised to discover you're rich, especially if you're broke. How do you know you are a member of the penurious plutocracy? Take this simple test: See if you pay double for everything.

The financial bailout, for example. Pay for it once with your IRA and 401(k) plan investments. Now pay for it again with your tax dollars.

Ditto with the economic stimulus. Write checks to cover your mortgage payment, utilities, insurance premiums, car loan, basic cable, high-speed Internet access, Visa, MasterCard, and American Express bills, and turn your teens loose in the Old Navy store. Think you're done stimulating the economy? I think not. You've also lent President Obama a godzillion dollars to go on an economically stimulational shopping spree of his own. For collateral the Bank of Obama is using a mortgage on that home of yours called America and a lien on all the future earnings of your children.

How about the new car you've paid for with government largesse to GM and Chrysler? They didn't even send a thank you note containing a scratch-and-sniff card with that new car smell. If you want a car that's visible in your driveway, you'll have to--you guessed it--pay double.

Of course paying double for everything didn't start with the Meltdown of '08. It's an integral part of the modern welfare state.

Beginning with welfare. Your tax dollars pay for federal, state, and local welfare programs. Then you pay for your daughter to pursue a career in "holistic dance liberation." You pay for your son's Internet start up idea--"Buttbook," a website where everybody is an enemy. Plus there's your bum of a brother-in-law, drunk in the double-wide, watching Cartoon Network on the widescreen high-definition television you paid for.

At school, home, or work, the most important purpose of government is to protect your person and property. That's what the police department is for. And you get to pay the police and pay for burglar alarms, private security patrols, and guard dogs, such as our family guard dog, Pinky-Wink. (For the information of any prospective robbers of the O'Rourke house, Pinky-Wink isn't really a Mexican Hairless. He's .  .  . um .  .  . a Rhodesian Ridgeback, weighing 100 .  .  . make that 150 .  .  . pounds. Uh, the kids named him. Stop yapping, Pinky-Wink.)

But usually it's money. When you pay a hospital bill you're really paying two hospital bills--one bill for you because you have a job and/or insurance and can pay the hospital and another bill, which is tacked onto your bill, to cover the medical expenses of someone who doesn't have a job and/or insurance and can't pay the hospital. Your tennis elbow underwrites the Sara Jane Olson Public High School student's 9mm handgun wound.

And never is paying double as doubly troubling as it is in the matter of retirement. You have to pay into Social Security and into your IRA and your 401(k) plan and put some more money in your savings account too. You have to pay Medicare tax and buy Medicare supplemental insurance and contribute to a medical savings account and make doctor bill co-payments besides. And the funding for Social Security and Medicare is so under-financed and actuarially shaky that you cannot be certain those programs will exist at all by the time you're eligible for them. And you're 64.

Would you like to know what ordinary taxpayers are getting out of this deal? You and me both. How do we benefit from this twinning, this twoing, this duality? Damned if I can figure it out. Barkeep, make that a double.

P. J. O'Rourke is a contributing editor to THE WEEKLY STANDARD.
Posted by jtf at 8:14 AM