[Editor's note: The following review appears in No Depression #77, the second in a series of "bookazines" edited by Grant Alden and Peter Blackstock and published by University of Texas Press. The bookazine can be ordered here.] 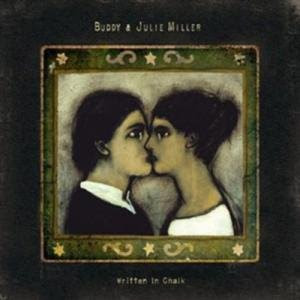 When news began trickling out that the next Buddy Miller album — the first since 2004's widely acclaimed Universal United House Of Prayer — would in fact be a Buddy & Julie Miller album, it came as somewhat of a suprise, in a positive way. The married couple had not made a record bearing both their names since 2001's self-titled disc, and in recent years Julie has significantly retreated from the spotlight, rarely if ever appearing onstage.

What's perhaps most striking, then, about Written In Chalk is that Buddy relies almost exclusively on Julie for the album's material. She's credited as the sole songwriter on eight of the disc's twelve cuts; one is a Buddy/Julie co-write, with the other three being covers of songs from several decades past.

In a way, this makes perfect sense: Despite not having issued a record of his own in nearly five years, he's been extraordinarily busy as a guitarist and producer. He finally took a break from Emmylou Harris' band to tour with Robert Plant & Alison Krauss, though he's also still doing occasional collaborative acoustic dates with Harris, Patty Griffin and Shawn Colvin (under the billing "Three Girls And Their Buddy"). In the studio, he's produced records for the likes of Solomon Burke and Allison Moorer, as well as contributing guitar and/or vocals to records by everyone from P.F. Sloan to Miranda Lambert to Rodney Crowell to Frank Black.

Comparatively, Julie has had a little more time for songwriting during that stretch.

At least one song here dates back to 2003, as it addresses the passing of June Carter Cash, who died in May of that year. Others were apparently written, or at least completed, much more recently, given the remarks Buddy made to ND co-editor Grant Alden about the album in the cover story of our final bimonthly issue in the spring of 2008: “She’s been writing a ton of great songs, at least starting them and getting them halfway done...but she’s finishing some of them.”

In that interview, Buddy also alluded to the difficulties that led to Julie's retreat from performing, setbacks both physical (she suffers from fibromyalgia) and emotional (the death of her brother from a bolt of lightning). "I think out of this whole tough three or four years she’s been able to put down some things," Buddy said. "And not all heavy stuff."

That last observation is essential to getting the full picture of this record. Despite the hard times that may have motivated Julie's writing, Written In Chalk isn't merely a litany of lament. Nowhere is that clearer than on the first track, "Ellis County", which may well be the best song Julie has ever written. At the very least, it's the most immediately appealing; by the second time you play it, you feel like you've known it all your life. The first verse begins with Buddy's voice singing her words of longing for a simpler time:

Julie joins in on the next verse, and the band (Larry Campbell on fiddle, Brady Blade on drums, Chris Donohue on bass, John Deaderick on keyboards) gradually builds up the song's upbeat country-folk-rock structure, using those traditional American sounds to celebrate the beauty of traditional American values. At a time when the future is collapsing under its own weight, there is warmth and wisdom Julie's wishful wants and words: "Take me back." 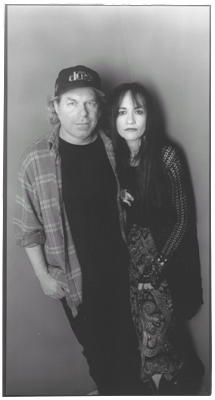 A hint of her personal tragedy lurks within one line, as Julie pines for the days when "I had all my sisters and brothers." She digs deeper into that darkness on a trio of ballads where saying farewell, or trying to, is a recurring theme. On "Don't Say Goodbye", Patty Griffin sympathizes in harmony as she sings, "Take the stars down that I wished on/Take my tears so I don't cry." More elusive is "Everytime We Say Goodbye", which is bathed in sonic layers of guitar and keyboards.

The hardest hitter is "Chalk", an exquisite and dramatic number which features Griffin again, this time accompanying Buddy's lead vocal. "All I did was help you tell a lie/You never even knew it when I said goodbye," they sing, their voices wrung with desperation. And, vividly, in the lyric which gives the album its title: "All our words are written down in chalk/Out in the rain on the sidewalk." The way forward, finally, as has long been the case in Julie's music, and life, is through her faith:

The counterbalance comes on "Memphis Jane", a six-minute, down-and-dirty bluesy rocker about picking up a hitchhiker who has no particular place to go. Further diversity comes from the covers: "What You Gonna Do Leroy", a Mell Tillis tune covered by both Lefty Frizzell and Burl Ives, receives a cool, understated reading, as Buddy trades verses with Robert Plant. Things get turned up a few notches on the pop-soul nugget "One Part, Two Part" (written by Dee Ervin and recorded in the '60s by Clydie King), featuring a fiery vocal contribution from longtime Miller associate Regina McCrary. The album closes with Buddy and Emmylou Harris duetting on Leon Payne's "The Selfishness In Man", memorably recorded by George Jones but coming across here as something Emmylou might have sung with Gram Parsons back in their brief heyday.

Preceding that track is the aforementioned song about the passing of June Carter Cash, titled simply "June". It's the album's sparest and ultimately most moving moment, Julie's sweet whisper hanging just above Buddy's gently picked acoustic guitar strings and a faint touch of piano keys as she makes the bold move of stepping into Johnny Cash's shoes to empathize with his loss: "I know someday I'll sing with you again, but the love that you gave me will last until then." And there's the remembrance of how "the moon's face was hiding" on the ides of May in 2003, when "an eclipse of the moon said that you were gone."

The world misses June & Johnny to this day. But we've still got Julie & Buddy.
Posted by jtf at 10:21 PM