Arne Duncan, the new secretary of education, says that under No Child Left Behind 'we have been lying to students and their parents.' 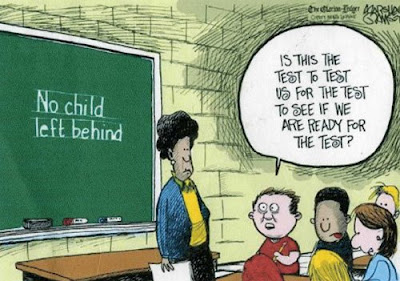 Sonorous Washington talk about education in grades K through 12 is usually solemnity without seriousness—the issuance of imperious commands to an unimpressed future. In 1994, Goals 2000 anticipated a high-school-graduation rate of "at least" 90 percent (it is 75) and American students being "first in the world in mathematics and science" in six years. In 2002, No Child Left Behind decreed 100 percent math and reading proficiency by 2014. That will not happen.

Now comes Arne Duncan, 44, the new secretary of education, fresh from seven years leading Chicago's public schools. There he showed a flair for innovation, which he acquired at his mother's knee. Now 74, she was, her son says, "the crazy white lady" who in 1961 opened, in the "absolute chaos" of a rough neighborhood on Chicago's South Side, an after-school tutoring program for young African-Americans, for whom she still toils, 48 years later.

Her son is impressively impatient with what George W. Bush called "the soft bigotry of low expectations." But under Bush's NCLB, Duncan says, "we have been lying to children and their parents because states have dumbed down their standards" of proficiency. "Sometimes," he says, "you have to call the baby ugly."

For decades, state legislatures, encouraged by teachers' unions, have embraced the theory that schools' cognitive outputs were a function of financial inputs. The theory was: As with soybeans, so with education—if you want more, increase subsidies.

But in 1966, the Coleman Report concluded: "Schools are remarkably similar in the effect they have on the achievement of their pupils when the socioeconomic background of the students is taken into account." That was a delicate way of not quite saying that the quality of schools usually reflects the quality of the families from which the students come. One scholar estimated that about 90 percent of the differences among schools in average proficiency can be explained by five factors—number of days absent from school, amount of television watched in the home, number of pages read for homework, quantity and quality of reading matter in the home and, much the most important, the presence of two parents in the home. Government cannot do much to make those variables vary, but Duncan correctly thinks that we actually know how to make schools effective anyway. The keys are time and talent.

America's 180-day school year, which is up to 60 days shorter than in many advanced nations, is a legacy of the 19th century, when children were needed on farms for spring planting and fall harvesting. Today, many middle-class children read and travel during a three-month summer break; disadvantaged children regress, so a portion of the precious 180 days must be devoted to remediation.

In Chicago, Duncan had many schools open 10 to 12 hours a day, six or seven days a week, for voluntary activities, including instruction. There were waiting lists for placements. Until recently, almost all students attended the nearest school. Now, under a policy whereby money follows the students, 59 percent of high-school students are attending schools they choose away from their neighborhoods. By closing failing schools and opening replacements, Chicago is ensuring that the portfolio of schools is churned and improved.

Half of Chicago's 30,000 entering freshmen attend a monthlong program where they are enticed and warned—enticed by college visits, and warned that certain data are clear: With every F a freshman gets, the chance of graduating declines 20 percent; of freshmen who miss eight days of school in a semester, fewer than half will graduate.

Asked by an impertinent interviewer if education schools are a net subtraction from the quality of teachers, Duncan answers obliquely, which is a good sign: He says only that by the end of his Chicago tenure 20 percent of the new teachers being hired had "alternative certification"—credentials other than those provided by ed schools. Such people had "hitherto been locked out." Asked which he would choose, hiring 100,000 new teachers or firing 100,000 bad teachers, there is a long pause—another good sign—before he says he would take the new teachers because most of the worst teachers are older and are retiring.

He thinks finding talented teachers is more important than reducing pupil-teacher ratios—a third good sign—and he sees a silver lining on today's dark economic clouds: Bright young people who might have gone into investment banking can be lured into teaching by better pay and forgiveness of student loans. By making teaching more fun, his Chicago innovations helped increase the number of applicants from two for each teaching position to 10. And 43 percent of recent hires had master's degrees. Five years of such replacements can, he says, shape public education for 30 years.

From his office at the foot of Capitol Hill, Duncan hopes to use federal money as a lever to move local school systems toward creative improvisations. But in Chicago he had a hammer—the support of His Honor, Mayor Richard Daley. Duncan may be about to receive an education in the difficulty of defeating local inertia from afar.

Email ThisBlogThis!Share to TwitterShare to FacebookShare to Pinterest
Labels: Education, George Will