Timing is everything politics, as the Obama administration recently learned to its considerable embarrassment. On the very week that the administration proposed easing some economic and travel sanctions on Cuba, part of a newfound outreach to the communist country, the biggest political shake-up in twenty years rattled Cuba's regime.

Last week, Raul Castro purged almost twenty regime officials. The most prominent among the purged were the youngest and most reform-minded – at least as these things are measured within a Stalinist regime. All have now been replaced by diehard communists with military and secret-police backgrounds. 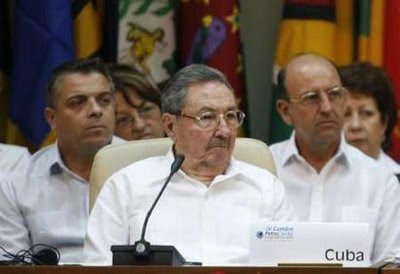 Cuba's President Raul Castro (C), Cuba's former Vice President Carlos Lage (R), and Cuba's former Foreign Minister Felipe Perez Roque (L), attend a meeting in Cienfuegos, Cuba in thisDecember 21, 2007 file photo. Perez Roque and Lage had been Cuba's top young leaders until President Raul Castro cast them out of jobs in a government reshuffle earlier this week. Both have now resigned from their other jobs in the Cuban government and the ruling Communist Party and admitted in letters published on March 5, 2009 in the state-run press that they had committed errors. REUTERS/Claudia Daut/Files (CUBA)

The provisions of Obama's “olive branch” to Castro are rooted largely in recommendations found in a February 23 “Report to the Committee on Foreign Relations,” titled "Changing Cuba Policy -- In the United States National Interest” and heartily endorsed by the ranking Republican on that Committee, Senator Richard Lugar.

“Positive developments are occurring in Cuba,” says the Lugar report, composed after some in his staff visited with Cuban officials last month. “It is clear that the recent (Cuban) leadership changes have created an opportunity for the United States to reevaluate a complex relationship marked by misunderstanding, suspicion, and open hostility," further states the Committee report Senator Lugar released on Feb 24th. As showcased by last week's purge, however, Senator Lugar has it exactly backwards.

In keeping with the repressive nature of the Cuban regime, and especially in keeping with Raul Castro's rule (Raul worked with a KGB handler as early as 1953), the more prominent among the purged (Carlos Lage, 56, VP of the Council of State, Felipe Roque, 45, Foreign Minister) have signed confessions seemingly lifted from the very template used by Zinoviev, Kanev and Bukharin in 1936.

Trotsky's murderer, Ramon Mercader, by the way, served as Cuba's “inspector of prisons” in the 1960's, was the favorite companion of both Raul Castro and Che Guevara, and was buried with honors in a Havana cemetery in 1978. This grave, however, doesn't seem to feature among the more popular sites for the 2.4 million Canadian and European tourists who visit Cuba annually and whose estimated $2.5 billion in expenditures annually for the past 15 years provide the very lifeblood of the Castro regime.

Raul and his Cuban military cronies own most of Cuba's tourist industry. Obama's bill will allow American tourists to participate in Raul's racket and further enrich his regime coffers, while his police bludgeon and bayonet any “unauthorized” Cuban who ventures too near the sparkling tourist facilities. Obama's reasoning seems to go like this: rewarding and enriching the KGB-trained and heavily armed guardians of Cuba's status-quo will magically convert them into instant opponents of that status quo.

This line of reasoning invariably fails to convince those with first-hand experience under Cuba's regime. And never mind the evidence. As mentioned, for almost each of the past 14 years almost 10 times as many tourists have visited Cuba as visited in any year during the 1950's, when Cuba was labeled a "tourist playground." Yet Cuba is as essentially Stalinist today as in 1965. Whatever trickle of foreign currency reaches the regime's subjects (primarily from prostitution) is offset a thousand-fold by the millions that enters the regime's coffers. Not that all of it stays there. According to prominent military defectors, much of it quickly winds up in Spain and Switzerland.

Politically, meanwhile, little changes in Cuba, as last week’s events demonstrate. The same apparatchiks who had worked up Cuban regime ranks were all purged and replaced essentially by apparatchiks who also held office in 1965. Similar purges have occurred in Cuban regime at least once a decade since 1959 -- and they will continue as long as Fidel or Raul remain alive.
But you’re unlikely to hear this reported in the media. Instead, you will hear about the young reformers who are allegedly ready to lead the country in a new direction. In particular, since Fidel Castro's “retirement” in July 2006, the name of the recently purged Carlos Lage had become a veritable mantra in the mainstream media. He's a young technocrat (not a military man) and an economic “reformer,” we are assured. Raul Castro had tapped him as his point man for reforming the Cuban economy along more free-market lines.

On January 18, 2008, American Public Radio's Marketplace aired this celebratory report: "In March, (2008) Cuba's National Assembly will name Cuba's president and Cuba experts uniformly predict that for the first time in 50 years, Cuba's president won't be a Castro. So who will he be? It's Carlos Lage...This is a time when Cuba's leadership moves toward generational change.” The following month, the BBC announced that “Carlos Lage is already a kind of de facto Prime Minister.. the new Cuban brand will be pragmatic and flexible.” Nearly identical reports appeared in the Miami Herald, the New York Times, CNN, all assuring that Carlos Lage had the ear of the regime and would soon have enough power to institute economic reforms. The new generation of Cuban leadership was here, and its name was Carlos Lage.

Where is Lage today? A recent samizdat from Cuba reports that after his recent sacking, Carlos Lage remains under a form of house arrest in Havana. Here's part of his “confession,” published in Cuba on March 3rd and addressed to “Compañero Raúl”: "I recognize and assume all responsibility for my errors. My ousting has been very just. Be assured that I will always serve the revolution and will always remain faithful to the Communist party, to Fidel and to you.” It is signed, “Fraternally, Carlos Lage Davila.” As always in communist Cuba, the more things change, the more they stay the same.

Humberto Fontova is the author of Exposing the Real Che Guevara and the Useful Idiots Who Idolize Him. Visit http://www.hfontova.com/
Posted by jtf at 7:03 AM