Lucas: Do Not Open

Adam Lucas on the win over Evansville.

To my children, Asher and McKay: Do not open this letter until the day someone breaks Tyler Hansbrough's UNC career scoring record.

I didn't think you'd ever open this letter. On the day I wrote this, Dec. 18, 2008--yep, all the way back in the ancient `00's--I thought Tyler Hansbrough's UNC scoring record would stand forever. He'll pile up nearly 3,000 points by the time he's finished at Carolina, and I'm not sure anyone who can score like that will stay around long enough to top his total. 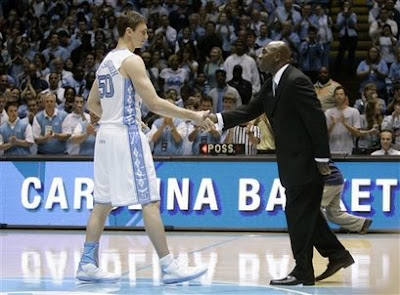 On this day, when Hansbrough broke Phil Ford's record with a very fitting burly post move, Ford is just a name in the record book to some younger fans. It's unfathomable that Hansbrough would ever be in the same situation, but if this letter is decades old by the time you read it, you may not even remember that Asher used to wear a size-3 number-50 jersey to home games, and that McKay would shout, "There's Tyler Hans-browe-owe!" whenever she saw him on television (McKay: don't feel bad. The pronunciation is listed in the media guide and yet radio and TV announcers still mispronounce it every night).

He was more than a player to us. He was, well...hang on a second. First, I want you to understand a little bit about the player Hansbrough passed to earn the record. I was too young to see Phil Ford play live. So I asked your grandfather, my dad, about him. As you know, your Grandpa doesn't gush. But this is what he said about Ford:

"He wasn't showy, but everyone respected him. And they were scared to death of him, because no one could figure out how to stop him. My mental image of him is of him standing in the corner near midcourt holding up four fingers, signaling for the Four Corners. When that happened, we had it. The game was over. It was like Red Auerbach lighting his cigar [Note to kids: look Auerbach up on Wikipedia, if that still exists].

"But what made him a legend was the fact that he was one of us. He was so good--he was the best--but he never told anyone he was. He just went out, got the job done, and went home. He was the best I've seen."

You know your Grandpa, and you know how much he loves Carolina. He used to shoot baskets in the driveway pretending to be York Larese ("because he shot his free throws in a hurry") or Doug Moe. His dad used to give him Dixie Classic tickets for Christmas. And with that type of perspective, he calls Ford the best. Your Grandpa doesn't get nervous. He's met plenty of important people. But he still remembers the first day he got to speak to Phil Ford: "I never thought I'd have the chance to talk to someone like him. It was just unbelievable."

Here's Ford's status: he's one of the very few Tar Heels who can get a standing ovation simply by walking to midcourt, as he did after the game. He hadn't even said anything yet, and already 21,000 people were roaring. Here, in Chapel Hill, no one pointed and said, "There's Phil Ford." No, this was home. So they just said, "There's Phil."

That's the status Hansbrough will enjoy for the rest of his life. One day, he'll get that same reaction at a home game by walking to midcourt, and people my age will point at him and say to the younger fans, "That's the guy I've been telling you about all these years."

At the last home game, a girl sitting somewhere in the upper deck screamed, "I love you Tyler Hansbrough!" at the top of her lungs every time he shot a free throw. Picture that--the Smith Center completely silent except for one girl screaming his name. That's the kind of devotion reserved for rock stars, not basketball players. 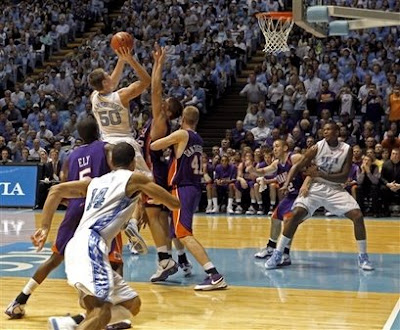 North Carolina's Tyler Hansbrough (50) shoots against Evansville during the first half of an NCAA college basketball game in Chapel Hill, N.C., Thursday, Dec. 18, 2008. The shot broke the all-time scoring record at North Carolina held by Phil Ford, who had 2,290 points.(AP)


I'm sure I've told you this, but my favorite image of the night he broke Ford's record didn't happen on the court. It was after the game, in a back hall of the Smith Center. He was still wearing his white game jersey and shorts, the shirt untucked. He had the night's game ball in his right hand, and he was dribbling it. He turned for just a second to offer a smile to someone sending congratulations, and he looked happy. He'd just set one of the greatest records in Tar Heel basketball history. You know where he was going? To a session with strength coach Jonas Sahratian.

You know what links Ford and Hansbrough? It's not their points. It's the way they scored them. Ford was a guard and Hansbrough was a post player, but take your Grandpa's description of Ford--he was the best, but he never told anyone he was--and you've got Hansbrough.

He'll swear this isn't true, but when Hansbrough flew in on his recruiting visit, the shaky winds and small plane made him so nervous he had tears in his eyes. He spent most of his first year riding around campus on a bike. I don't know how big-time players get around campus these days, but in 2006 they didn't pedal bikes. The first big road trip of his freshman year, Carolina went to play Southern Cal. The team had to fly home commercial instead of the usual charter plane, which meant he had to go through the normal check-in and security procedures. I'll never forget that petrified look on his face as he said, "I don't know how to do this."

We've seen him grow up, not just as a player--by the time he was a senior, he was regularly taking and making perimeter jumpers--but as a person. Earlier this season we went to Maui, and he was so nonchalant about the long flight he even had time to help save someone's life.

I want to make sure you understand that Hansbrough was about more than points. I've seen lots of players who can score. But if I had to give you one signature Hansbrough play, it wouldn't even be a basket. It would be during his junior year against Clemson at home, when he swiped the ball away from a player allegedly more mobile than him, David Potter, and the ball trickled back across midcourt. Right at that moment, both players had an equal chance at the ball. But really, all of us in the Smith Center knew it was no contest. Hansbrough sprinted past Potter and threw himself on top of the loose ball, cradling it while flat on his back. It wasn't a championship game. It wasn't even a Carolina-Duke game. It was just a game. But that's how he played.

A quick story: in the summer of 2007, a handful of Duke players came to Chapel Hill to play a pickup game. Included in that bunch was Gerald Henderson. You probably know the history between those two. Well, a couple games into the afternoon, Henderson stripped the ball from Hansbrough. It was a clean play, a good defensive play.

Hansbrough took it personally. His eyes narrowed and his brow furrowed. He got that same look he had a whole lot of the time during the game against Evansville when he set the scoring record, when there was plenty of physical play in the post. In that pickup game, when his team threw the inbounds pass, he called for the ball like it was water in the desert. "Hey!" he shouted. "HEY!" 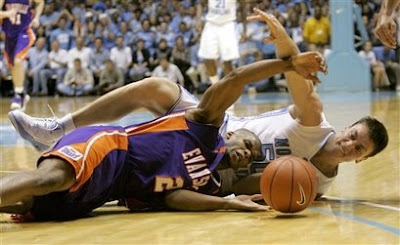 North Carolina's Tyler Hansbrough and Evansville's Kavon Lacey (2) watch the ball bounce away during the first half of an NCAA college basketball game in Chapel Hill, N.C., Thursday, Dec. 18, 2008.(AP)


They threw him the ball, and he waited just long enough for Henderson to get behind him. He pounded it once on the ground, and most of us on the sidelines were surreptitiously dialing 911 on our cell phones, because it was obvious we were about to have a major incident. We needed a medic, probably, and the coroner, maybe.

He took that power dribble, and then he jumped straight through Henderson, who took a semi-leap and tried to pull down Hansbrough's right arm. The big guy was oblivious to it. He shrugged off Henderson, put the ball in the basket, and then--with all of that history and all of that bad blood--he just ran back down the court.

And that was it. They kept playing. Statement made, game won.

I saw every game Hansbrough played during his Carolina career, and it never got old. He was the rare creative big guy (or "Big Fella," as Williams usually called him). Some people will tell you he thrived with brute force. Don't believe them. Watch the Louisville tape from 2008 if you need evidence.

I'm not asking you to think Tyler Hansbrough is a better player than this guy who is getting ready to break his record. That's my generation's job, to think he's the best we'll ever see.

I hope I'm still around when you read this, and I hope you'll come find me. I'll probably be sitting on the front porch in a rocking chair, telling Tyler Hansbrough stories.


Adam Lucas is the publisher of Tar Heel Monthly. He is also the author or co-author of four books on Carolina basketball.

University of North Carolina Men's Basketball
Posted by jtf at 10:26 AM