If the Shoe Fits, Throw It 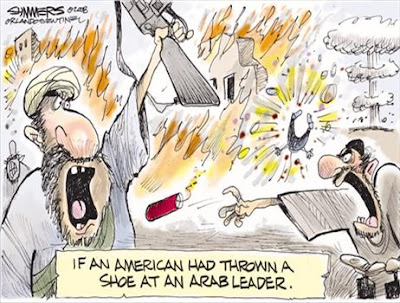 The Islamic world’s latest hero is Muntadhar al-Zeidi, the reporter for Cairo’s Al-Baghdadia TV channel who threw his shoes at President Bush at a press conference in Iraq on Sunday. Hasan Muhammad Makhafa, a wealthy Saudi, went on Dubai’s Al-Arabiya TV to call al-Zeidi’s shoes “a symbol of freedom not just footwear. They represent a victory for those who have disgraced the Arabs by occupying their lands and killing innocent people.”

The less well heeled were just as jazzed by al-Zeidi’s Wing-Tip Jihad. In Damascus, a street banner proclaimed, “Oh, heroic journalist, thank you so much for what you have done.” In Beirut, a Hizballah-affiliated journalist, Ibrahim Mousawi, exulted: “It’s the talk of the city. Everyone is proud of this man, and they’re saying he did it in our name.” Ali Qeisi of the Jordan-based “Society of Victims of the US Occupation in Iraq” declared: “All US soldiers who have used their shoes to humiliate Iraqis should be brought to justice, along with their US superiors, including Bush.” And the querulous Lebanese-American professor Asad Abu Khalil, who calls himself “The Angry Arab,” thundered that “the flying shoe speaks more for Arab public opinion than all the despots/puppets that Bush meets with during his travels in the Middle East.”

Meanwhile, according to news reports, “thousands of Iraqis” demonstrated in three cities -- Baghdad, Basra and Najaf -- to hail al-Zeidi as a hero and demand his release from prison, where he has been held since the attack. There hasn’t been this much excitement in the Islamic world over anyone since…Osama bin Laden, whose ascetic visage could be found after 9/11 gracing t-shirts, visors, cigarette lighters, children’s toys and more.

These days, only President-elect Obama’s popularity rivals that of al-Zeidi in Muslim countries. Right after the election, Achmad Sobry Lubis of a virulently anti-American jihadist group in Indonesia called the Islamic Defenders’ Front (FPI), said of Obama that “we are now very hopeful that he can restore peace in the world.” Another jihadist, Eid Kabalu of the Moro Islamic Liberation Front (MILF) in the Philippines, declared that Obama “has to reduce U.S. involvement in war, which, in effect, will make global peace reign under his administration.” Ahmed Yussef of the jihad terror group Hamas said that Obama’s election gave the U.S. a “chance for a change, after his predecessor, George W. Bush destroyed relations with the external world.”

It may seem odd that the three most popular people among Muslims worldwide today would be the President-elect of the United States, a mass-murdering jihad terrorist, and a somewhat comical shoe-hurling journalist -- but anti-Americanism makes strange bedfellows. And that is certainly the common element in the popularity of all three. Many in the Islamic world believe or hope that Obama will be the anti-Bush, and will craft a foreign policy more to their liking than Bush’s -- that is, one involving concessions and appeasement.

It’s also noteworthy, meanwhile, that while “thousands of Iraqis” could be mustered on extremely short notice to protest al-Zeidi’s incarceration, to this day thousands of Muslims have never demonstrated anywhere against Osama bin Laden and his alleged “hijacking” of their peaceful religion -- except on a few occasions when Al-Qaeda has targeted Muslims rather than non-Muslims.

The popularity of Muntadhar al-Zeidi is telling: the shoe-hurler is more popular in Islamic nations today than any Islamic reformer ever has been. The man who subjected President Bush to Arab culture’s ultimate sign of disrespect and contempt is at once more famous and beloved among Muslims than a President who endeavored, whatever may be said of how well-advised or successful his policies have been, to save innumerable Muslim lives by planting free and stable societies in Iraq and Afghanistan.

Osama’s popularity in the Islamic world has been obvious for seven years, and yet policymakers in Washington still have not examined its implications. The celebration of the Flying Florsheims of Baghdad reinforces once again the fact that the objects of so much hope in the West, those large numbers of Muslims who love America and abhor jihadism, have yet to make themselves known in any effective way -- despite the fact that so much domestic and international policy, ranging from questions of immigration to the role of Islamic law in Iraq and Afghanistan, depends upon their standing up to the jihadists. Will they ever do so, or are the aims of the global jihad just fine by them? If the shoe fits, throw it.

Mr. Spencer is director of Jihad Watch and author of "The Politically Incorrect Guide to Islam (and the Crusades)", "The Truth About Muhammad" and the new "Stealth Jihad" (all from Regnery -- a HUMAN EVENTS sister company).