Two Ex-Yankees Conspicuous by Their Absence

[I don't necessarily agree with everything written in Rhoden's piece but he is one of the few to address the issue. I had little problem with letting Clemens stay at home and watch the whole thing on TV and I don't believe that Joe Torre "single-handedly resuscitated" the Yankees. However, Torre is one of the all-time Yankee greats and he should have been given his due...he certainly earned it.- jtf]

Like millions of viewers, I was intrigued by the pageantry of the Yankees’ final game at Yankee Stadium on Sunday — a monument to history and self-indulgence. 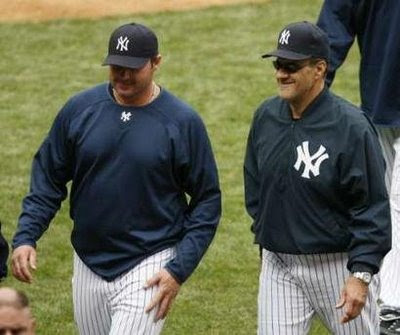 The big question was whether the Yankees were going to be honest and courageous. Did they have faith that the depth and the breadth of their highly acclaimed history was more powerful than the alleged trespasses of one individual? Would the Bombers bring out one final special guest? Would they bring out the Rocket, Roger Clemens?

We all looked and listened, but on Sunday night, it was as if Clemens were dead to the organization. When the Yankees played a video celebrating the team’s greatest players at every position, Clemens was nowhere to be seen.

But there were Andy Pettitte and Jason Giambi, admitted drug cheats — not alleged, not rumored — basking in the glow of closing night.

Clemens, a seven-time Cy Young Award winner, was as much a part of Yankees lore as any player who limped, trotted or slid onto the field Sunday night. Yes, he was a mercenary. But the Yankees built championships on the shoulders of high-priced mercenaries. And when it comes to the explosion of performance-enhancing drugs, baseball’s win-at-all-costs mantra is as responsible as the players themselves.

This is not about being a fan of Roger Clemens’s or about even liking him; this is about holding an organization’s feet to the fire when it attempts to rearrange history. Even its own.

Incredibly, there was also no meaningful mention of Joe Torre, who managed the Yankees to four World Series championships and 12 consecutive trips to the postseason. The Yankees’ director of media relations, Jason Zillo, pointed out to reporters that many great Yankees had not been mentioned. “There was absolutely no slight intended,” he said, “and perhaps, looking back, they should have been mentioned.”

Clemens, according to The New York Post, was watching the Stadium event on a television back in Texas; he was almost certainly seething and cursing, How could they not bring me back?

The Yankees wrap themselves so tightly in history, yet they let a whiff of history escape. I call it hypocrisy. The Yankees, I’m sure, call it good taste.

Clemens is up to his eyeballs in a steroids investigation, although nothing has been proved. Perhaps the Yankees wanted to spare Clemens the embarrassment of being booed. Let’s accept that explanation for the sake of argument (although, knowing fans as I do, Clemens might very well have received an ovation). What’s the excuse for ignoring Torre, who single-handedly resuscitated the Yankees?

Forget a mention; they should have unveiled a bust of Torre in Monument Park.

Contrast the Yankees’ handling of a controversial and potentially fallen superstar with the way the San Francisco Giants treated Barry Bonds, the man baseball would like to cast, and cast away, as the face of the steroids era.

Last month, as part of the Giants’ celebration of 50 years in the Bay Area, the team hosted a reunion of its outfielders.

“There was never a conversation about not inviting Barry,” said Larry Baer, the executive vice president for the Giants, in a telephone interview Tuesday. “From Day 1, we had every intention of inviting Barry.”

Bonds accepted the invitation, attended the celebration and received a rousing ovation. He spent the first three innings of the game in the broadcast booth. Bonds, on his own, attended a statue dedication ceremony the Giants held for Orlando Cepeda on Sept. 6. 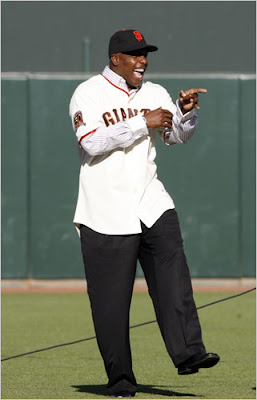 The Giants did not hesitate to invite Barry Bonds to a team celebration on Aug. 9, and he happily attended.


Baer said that Bonds could eventually fulfill the role of team ambassador that his godfather, Willie Mays, has played for the Giants since 1996.

“His actions suggested that that is how he would like to be viewed,” Baer said. Obviously, the outcome of Bonds’s coming perjury trial will affect his relationship with the Giants’ organization, although Baer said he could not predict how.

Bonds ended his brief address to the fans during last month’s reunion by saying, “I haven’t retired.” That came as news, I’m sure, to the Major League Baseball establishment, which has successfully kept Bonds out of baseball.

There are those in baseball who do not want Bonds to add to what they feel are tainted statistics and will do whatever they can to keep him out.

At the same time, it’s O.K. to allow Andy Pettitte and Jason Giambi to add to their statistics.
The Yankees’ decision to ignore Clemens was hypocritical. Ignoring Torre was sheer pettiness.

“In sports, unfortunately, you’re going to have some not-so-good endings with great players,” Baer said. “That’s the nature of the beast. That doesn’t mean down the line you can’t have rapprochement.”

Now that they have been eliminated from playoff contention, the Yankees have only one more opportunity for redemption.

In November, when the Stadium officially closes, the organization, for its own sake, ought to acknowledge Clemens and Torre.

No sense in bringing an old curse into the new stadium.