The need for a new kind of pluralism.

After all the activity on NRO’s “The Corner” following my September 17 conversation with Heather Mac Donald about atheism and theism, a raft of e-mails came my way, about one-third of them from self-described atheists. 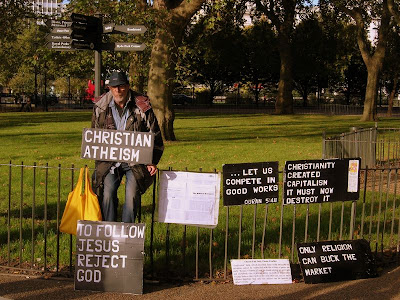 These sturdy atheists taught me some things of which I had been insufficiently aware. One said he hated being told by Christians, sometimes standing uninvited at his own door, that his atheism was inadequate, even inferior. Another found the smugness and condescension of believers “insufferable,” and told me I should not have used that word of atheists until I had experienced the “insufferable” Christian version myself.

As it happens, just this morning two kind-looking ladies came to my door, and after wishing me a beautiful day, asked to leave with me a copy of The Watchtower (accepting which would probably place me on a “revisit” list). Several times in the past our home has had similar visits, not always as pleasant as today’s. I tried to be as polite and firm as I could, and give the ladies a smiling “God bless you” as I sent them away.

I can see how this would be annoying to an atheist. It sometimes bothers me. On the other hand, these were two nice women earnestly doing something difficult, in order to show their own inner fire to obey the imperative: “Go and teach all nations.”

These recent e-mails further made me think how difficult it must be to live in a country which is over 80-percent Christian in population, and annoyingly Christian in public life, with a faith sometimes unavoidable even inside one’s own front door.

All of us have met Christians who are in fact smug, condescending, insufferably certain that their own brand of the faith is superior to ours. Not a few tell Catholics that our faith is a corruption that will doom us to hell. We Catholics have also met some of our own faith so narrow-minded that they view us with barely controlled contempt. Some are narrow-minded in a traditionalist way, others in a “progressive” way. Point is, there are internal divisions, too.

But few of us belong to a minority as small as the small sect of atheists.

My informants also try to show me how “insufferable” are references to atheists as a small “sect.” They do not feel theirs is a sect. They think theirs is the “reality-based community.” Several take pains to insist that atheism is not an “opinion,” but a fact. They do not “question” it, they say, because it is just a solid fact. Not a fantasy, like Christian faith or Bugs Bunny.

It appears that they get their idea of what a “fact” is from the following sequence: They observe data discernible to the five senses, and then formulate an insight that unifies these observations in an intelligible way, and then, third, verify the insight against further evidence from the senses. They come to “facts” — real, solid, existential things, not fantasies — through this “verification principle.”

But philosophers have shown that this “verification principle” is not itself empirically verifiable. It needs to be argued for, not merely asserted. Each operation in the process — observe, gain insight, verify — is subject to many meanings, and understood in different ways by different philosophies. My atheist correspondents too easily pass over the epistemological and metaphysical difficulties in their choice of method (or at least in their descriptions of that method).

For instance, proving a negative has long been thought to be, if not impossible, at least unreliable. Necessarily, then, atheism is a belief, not a fact. It may be a belief with (as atheists think) a very high degree of probability, even though we theists judge it to have a low degree of probability. By contrast, agnosticism seems to be a more tenable commitment than atheism. Problem is, in action one must act as if God does not exist (etsi deus non daretur), or as if He does. In action one must make a commitment that one cannot quite make on purely intellectual grounds. It is by our deeds that we show what we most deeply believe.

One implication of this finding, interestingly enough, is that there are many who call themselves believers, whose actions show that their heart is committed elsewhere. Their deeds are out of line with their words. Similarly, there seem to be persons calling themselves atheists whose actions seem more in line with Jewish and Christian (and natural law) norms than their words do. For such reasons, wisdom seems to suggest that final judgment on any one of us is beyond our poor capacities. It is best left to an undeceivable Judge, to Whom our hearts and consciences and intentions are transparent.

Thus, what some atheists present as “fact” is actually a “belief,” a commitment to a certain way of viewing the world. Sometimes (not always) that way is a simple-minded materialism. They will accept as evidence only material things, as detected through the five senses. For them, beyond material things nothing else is real. However, this affirmation of theirs is not a statement subject to empirical test. It is a choice of one procedural rule rather than others.

Thus, some atheists seem to be evading the complexities behind their own narrow beliefs — and don’t want to think about them. They are more comfortable in a world of touch, sight, hearing, taste, scent. To stay solely in that world may be to understand themselves much too narrowly.

To many of us, for instance, it seems that acts of insight and judgment are far more vivid, valuable, and even pleasurable — we are exhilarated by the eros of inquiry — than are acts of our senses, delightful as these sometimes are. Do we not often arise from hours of reading, thinking, or writing, having been intensely captivated by insights and judgments, to find that our bodies are stiff and sore, perhaps too cold or too hot, hungry, thirsty? For many, insight, judging, and loving are penetrating human experiences more precious than the activities of the senses. Because of their preferability, the range of their activities, and their sublimity, these activities have often been thought of as a human being’s “spirited” acts, the acts of the human spirit.

Human beings seem to be best understood as either inspirited bodies or embodied spirits — a unity at the core of our being. Without the distinctive refinements of human brain cells and neurons, we lose our capacities for insight, judgment, love. But without exercising our capacities for insight, judgment, and love, our bodies fall far short of our human potential, often in a way so unworthy of ourselves that to others, we become objects of scorn: “You pig!”

That is why to make a mistake in understanding oneself is almost certain to lead to mistakes in coming to an understanding of God. A materialist will be looking where no evidence of God can possibly be found. His choice of method predetermines his failure.

Just as it helps believers to understand that atheists can be irritated by condescension from believers, it may help atheists to see that insisting that their own convictions are unquestionable “facts,” while those of others may be airily dismissed, undermines their claim to being fair-minded. If we are to have a dialogue based on mutual respect, we will all have to change our ways.

Meanwhile, the threat to our lives and liberties posed by a worldwide pseudo-religious totalitarian movement demands that all those who love liberty stop being divided against ourselves. True enough, we each have reasons for our own convictions, but we do well to respect the convictions of all others willing to fight alongside us against the common threat. In this great work, we will have to learn a new skill in civil conversation concerning matters of fundamental differences in philosophy and religion. These differences can no longer be ignored as if they did not exist, and were not of any serious importance. Manifestly, they are.

In previous generations, Americans have tacitly agreed that pluralism is best protected by remaining silent about profound differences in conviction. Today, pluralism needs a new set of protections: civil, reasoned conversation about much that divides us, so that fears of one another might be diminished, and enduring respect for one another come to flower.

— Michael Novak’s latest book is No One Sees God. His website is http://www.michaelnovak.net/.
Posted by jtf at 3:44 PM