Forget Cool: Paul Newman Knew How to Play It Smart

Paul Newman, who died Friday at 83 of cancer, was a beautiful man who never seemed to notice his own beauty.

He was at his worst when the camera did. 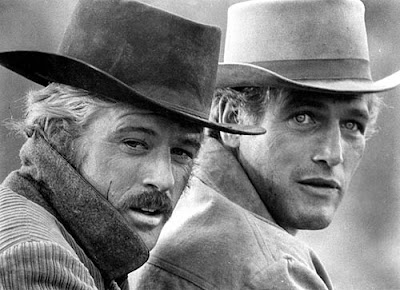 But far more often, he was at his best when he was too busy thinking to care about the looks he'd been given. He stood for an American archetype: He was the shrewd guy. Practical, tough, urban. He figured angles, calculated odds, charted courses, deployed distractions, maneuvered brilliantly. He wasn't violent, he wasn't a leader, he wasn't Mr. Cool with the babes, he had limited gifts for comedy and highly articulate, dialogue-driven set pieces. But nobody played shrewd better than Paul Newman. He became great playing shrewd.

You could see it in his eyes, and he probably didn't care much whether they were blue or not. You'd see them narrow as he lapsed into concentration, then come alive again as they read cues, divined patterns, perceived dynamics, sniffed weaknesses. He figured it out with a gusto he sold to audiences brilliantly, and you -- with him -- enjoyed his triumphant cerebration.

That, after all, was the point of his most successful movie, "The Sting." As con man Henry Gondorff, a Depression-era shark on a mission of vengeance, he was no '30s gunslinger with a Thompson gun packed away for rattatatat later on. He built elaborate schemes of dramatic fraud, almost a producer as much as a grifter, cast roles, staged action, manipulated illusion. He got his vengeance, all right, he and his buddy Johnny Hooker (that laconic, iconic avatar of blond diffidence, Robert Redford), but it was never in a spasm of killing. It was in the gotcha moment, when the hook, so elaborately prepared, was set with a mighty crank in the throat of a brutal gangster.

The same tactical hydraulics had been applied earlier in "Butch Cassidy and the Sundance Kid," again with Redford and the director George Roy Hill, who seemed to understand Newman's gifts better than most. In the western, Butch and Sundance are Wild West robbers, and while the Kid is a gunhand, Butch again is not drawn to the killing but to the money. He's like the Hollywood exec who said, "It's not the money, it's the money." He just wants to get over on people and things, mostly railroads, and seems grievously offended that they don't share his sense of game. They actually hire a posse of professional manhunters to ride him and the Kid down, and he keeps saying in wonder, "Who are those guys?"

It helped, of course, that he and Redford, another embarrassed beauty, had sublime timing and a genuine, if bluff, hearty, masculine affection for each other. In both of their great popular successes, that male bonding is the core of the appeal, because it's so unstated and unsentimentalized. When they go down at the end of "Butch" in the famous freeze-frame that captures them in time a fraction of a second before 300 Bolivian bullets take them apart, it's almost as if a sort of manhood has died: spontaneous, unaffected, generous, capable of love and loyalty, driven by intelligence, unclouded by doubt or recrimination. What came later would be more problematic.

Newman was born of middle-class parents and grew up in Shaker Heights, Ohio, a suburb of Cleveland. Fortune smiled from the start: His father owned a prosperous sporting goods store; his mother was "creative" and encouraged his participation in school drama. But he had a wild side and left his first university. He joined the Navy (it was World War II), and flew as a radioman/gunner on torpedo aircraft. But unlike many, he never made a thing out of it, never pretended to be a hero, never referred to it. In that respect, he was typical of his great generation: It was an obligation, he did it, so what? Now let's get on with life.

After the war, he managed the store for a while -- how un-Paul Newman is that? -- then went to New York to pursue an acting career, where his good looks soon got him noticed.

He rode early television success to his first role, starring in "The Silver Chalice" in 1954. Playing a Greek sculptor named Basil, he spent the picture looking baffled and embarrassed by a thigh-length toga. Paul Newman in a toga? Hollywood, we have a problem. 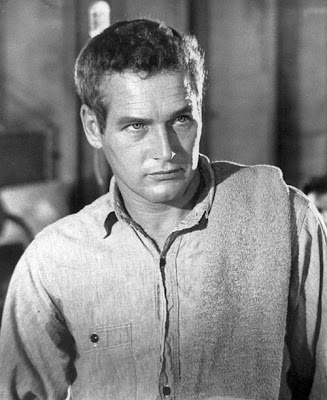 In this 1968 file photo Paul Newman plays a prisoner who becomes a legend to his fellow members of a chain gang in the film "Cool Hand Luke."

The real big break came in 1956, when Robert Wise, with his great eye for talent, picked him to play Rocky Graziano in "Somebody Up There Likes Me." That was the first Paul Newman, of the New Gen Method Acting School, a kind of proto-Brando or post-Dean Dean, almost always (particularly in Tennessee Williams adaptations, which he specialized in -- he got a lot of Southern roles, even if he never quite mastered the accent). He was the sensitive brute, beautiful, muscular, brimming with masculinity if not quite intelligence. (He played Billy the Kid in "The Left Handed Gun" for Arthur Penn as Billy probably was: rather stupid.) In "The Young Philadelphians," they got him into an undershirt to show off the good biceps.

He really hit his stride as he matured and found his lasting persona in a series of "H" pictures most movie buffs remember and adore for their intensity, intelligence and power. These were "Hud," in which he played the amoral son of a noble rancher in modern-day Texas, a great performance not hurt as much as you'd think by the Ohio accent; "Hombre," from an Elmore Leonard novel, as a super-shrewd outcast who finds himself in a stagecoach about to be robbed, and uses his wiles as much as his gun to defend civilization; "Harper," where he was Ross MacDonald's Lew Archer, with the name changed to accommodate the lucky H, another shrewd guy solving a new crime and an old one; and finally the shrewdest of them all (I save the best for last and pass on strict chronology), Robert Rossen's great "The Hustler," about the world of pool sharking. Newman's "Fast Eddie" Felson is all talent and guile, a fast-talking, great-shooting, pool-hustling demon. But he has character issues: hubris disguising doubt disguising fear disguising self-hatred. He is played expertly by another merchant of shrewd, George C. Scott as the malevolent gangster Bert Gordon.

Filmed in black and white by the great James Wong Howe, the movie crackled with the reality of low pool dives, the bitter clash of egos and aspirations, and Jackie Gleason's Zen presence as Minnesota Fats. It was the rare American film that dealt with issues of character instead of plot and for most Baby Boomers remains an icon of drama. Too bad they don't make 'em like that anymore, although they tried when Martin Scorsese directed a later sequel featuring Newman as a mature Fast Eddie. It won Newman his first Oscar in 1987.

But Newman was too protean a personality to be satisfied with just being a movie star. At least four other themes run impressively through his life. He was a lifelong liberal and was one of the first politically active stars, risking his reputation and possibly his livelihood for his beliefs. He campaigned actively for Eugene McCarthy in '68 when that was a hard thing to do, and even till the end of his life, he was a true believer in the classical liberalism of the '60s, with its adoration of the common man, its commitment to racial equality and its hunger for a less-bellicose world stance.

Then there's the driving. A friend who has raced and knows of such things said, "Paul Newman isn't a movie star; he's a world-class racing driver who happens to make his living acting in movies." It was true; discovering the sport in his 40s, he took to it intuitively and developed into a very fine driver. It gave him much pleasure and, in turn, showed the world that stars could be more than pretty boys who let the stuntmen take the risks.

Then there was his charity work. An able chef, Newman decided to market his spaghetti sauce and his salad dressing to the world as "Newman's Own." The foodstuffs were successful from the start, and Newman did something remarkable: He decided to donate all profits to charity. It is reliably reported that he made more than $250 million for charity.

But he was also a family man, remaining married to his second wife, the actress Joanne Woodward, for more than 50 years. He quickly sickened of the Hollywood lifestyle and, since 1960, lived in Connecticut, away from the ugly glitz of the movie town. Handsome, powerful, beloved, he probably could have had any woman in the world; he stayed with the one who brung him . . . that is, who was with him on the rough climb up.

it's hard not to admire Paul Newman for putting his money to work in such productive ways, such as his Newman's Own line--high quality stuff and the proceeds go to good causes... very smart.