By HARVEY ARATON
Sports of The Times
http://www.nytimes.com/
September 23, 2008 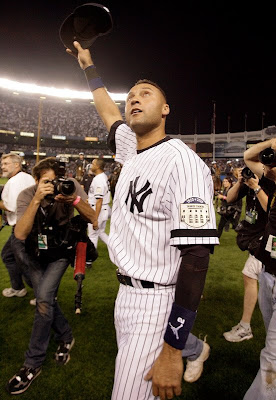 NEW YORK - SEPTEMBER 21: Derek Jeter #2 of the New York Yankees waves to fans after the last regular season game at Yankee Stadium on September 21, 2008 in the Bronx borough of New York City. The Yankees are playing their final season in the 85 year old ball park and plan on moving into the new Yankee Stadium across the street to start the 09 season. (Photo by Jim McIsaac/Getty Images)

By early Monday morning, the famous DiMaggio sign from the tunnel leading to the Yankees’ dugout was missing. Derek Jeter, prime suspect, was not talking.

“Everybody wants to know,” he said with a crooked, sheepish smile when asked if Joe D’s famous expression of pinstriped devotion — “I want to thank the Good Lord for making me a Yankee” — was the keepsake he claimed to have his eye on before the Yankee Stadium finale.

He was finally back at his dressing stall after a long night’s demonstration of why he could have gotten away with carting out the infield if he could have figured out how to lift it from the ground.

When they handed him a microphone on the field late Sunday night and his teammates crowded ’round, his words of gratitude to the fans were heartfelt, delivered with a poised candidate’s deliberate cadence. He said he was nervous but he seemed as if he were born for the moment, and with an occasional dab of the eye, we could believe he was the luckiest man on the face of the earth.

“What I was thinking as Derek was speaking was that it was going to be one of those moments that will play over and over for the next 100 years, like Lou Gehrig,” General Manager Brian Cashman said, standing near home plate while all around him, grown Yankees multimillionaires bent over and scooped dirt into small plastic cups. 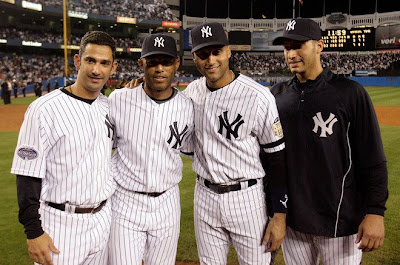 “I was thinking exactly that for him, how it doesn’t happen very often that an individual Yankee gets to address the entire Stadium on an occasion this special,” Cashman said. “And no doubt it had to be Derek.”

It had to be the player for whom the flashbulbs popped as they did for no other during each at-bat, all five hitless, in the 7-3 victory wrap of the Orioles. Jeter was still the people’s choice, as he has long been in the South Bronx, and will remain across the street next year.

He is the quiet captain, aloof even, some have argued, but everything he said Sunday night was pitched perfectly, and not just on the field. Before the game, he was asked what made Yankee Stadium so different. The lights, for one thing, he said. They always seemed brighter than elsewhere. He said he imagined actors feeling likewise playing Broadway.

“To be out there with him tonight as he spoke to the fans, as he let them know what the Stadium means to him, is something I’ll never forget,” the rookie outfielder Brett Gardner said. “You know, a lot of people say he’s a quiet captain. and maybe he is, but he’s a guy that leads by example, and that’s the kind of guy I want to follow.”

Jeter said the collective lap around the field “just kind of happened” but there was a moment when his arms were extended in the direction he wanted the Yankees to go. It was no one-man show: Mariano Rivera, Andy Pettitte and Jorge Posada remain beloved holdovers from the championship Joe Torre era, but the gesture was clearly a Jeter orchestration. 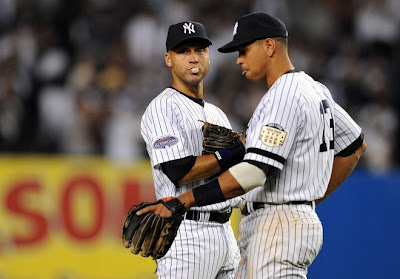 NEW YORK - SEPTEMBER 21: Derek Jeter #2 and Alex Rodriguez #13 of the New York Yankees talk against the Baltimore Orioles during the last regular season game at Yankee Stadium on September 21, 2008 in the Bronx borough of New York City.(Photo by Al Bello/Getty Images)

You could say that the Orioles owed it to the Yankees to play the inconspicuous role of the opponent in the staged production of self-celebration. On the night in Baltimore in September 1995 when Cal Ripken Jr. broke Gehrig’s record for the most consecutive games played, DiMaggio, of all people, graced the occasion with a rare ballpark visit. It may seem strange to younger fans after the home-run onslaught and subsequent steroid revelations, but a player merely running out to take his position at shortstop meant that much only 13 years ago.

“You could, after four and a half innings, watch him lap the field, grabbing hands all the way around, pulling America back into baseball,” I wrote of Ripken that night, sitting in the left field auxiliary press section.

In the season after a bitter work stoppage killed the World Series, Ripken reminded the country of the sport’s most appealing aspect, its men-at-work ethos. It always annoyed me to no end when people would say that McGwire and Sosa saved the game. The reality is that baseball came to a fork in the road, chose what it thought was a shortcut to riches and nearly wound up in ruin.

The season after Ripken left Gehrig behind, Jeter became a Yankee Stadium fixture at shortstop and a reminder over the past 13 years that the game is best measured by little things more than the long ball. By timely base hits and body language and grace under pressure. 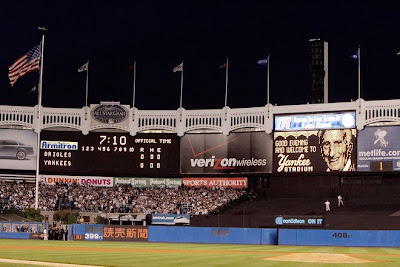 NEW YORK - SEPTEMBER 21: The scoreboard is seen during a pregame ceremony prior to the start of the last regular season game at Yankee Stadium between the Baltimore Orioles and the New York Yankees on September 21, 2008 in the Bronx borough of New York City.(Photo by Jim McIsaac/Getty Images)


“Derek is a lot like Cal because he represents all that our society aspires to be and what our game should aspire to be,” Cashman said. “Like Cal, and like most Americans, he takes his job seriously. He goes to work every day, and he does it with pride for his franchise and his city.”

After all these years, punctuated recently by Jeter’s surpassing of Gehrig, too, as Yankee Stadium’s career hits leader before they turned out its bright lights, there is nothing quiet about a statement like that.