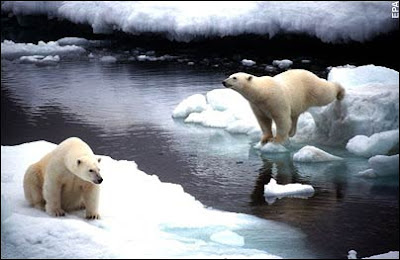 Last September's data, showed ice cover had shrunk over six months to just 3 million but by March the ice had recovered to 14 million sq km.

A notable story of recent months should have been the evidence pouring in from all sides to cast doubts on the idea that the world is inexorably heating up. The proponents of man-made global warming have become so rattled by how the forecasts of their computer models are being contradicted by the data that some are rushing to modify the thesis.

So a German study, published by Nature last week, claimed that, while the world is definitely warming, it may cool down until 2015 "while natural variations in climate cancel out the increases caused by man-made greenhouse gas emissions".

A little vignette of the media's one-sided view was given by recent events on Snowdon, the highest mountain in southern Britain. Each year between 2003 and 2007, the retreat of its winter snow cover inspired reports citing this as evidence of global warming.

In 2004 scientists from the University of Bangor made headlines with the prediction that Snowdon might lose its snowcap altogether by 2020. In 2007 a Welsh MP, Lembit Opik, was saying "it is shocking to think that in just 14 years snow on this mountain could be nothing but a distant memory".

Last November, viewing photographs of a snowless Snowdon at an exhibition in Cardiff, the Welsh environment minister, Jane Davidson, said "we must act now to reduce the greenhouse gases that cause climate change".

Yet virtually no coverage has been given to the abnormally deep spring snow which prevented the completion of a new building on Snowdon's summit for more than a month, and nearly made it miss the deadline for £4.2 million of EU funding. (Brussels eventually extended the deadline to next autumn.)

Two weeks ago, as North America emerged from its coldest and snowiest winter for decades, the US National Climate Data Center, run by the National Oceanic and Atmospheric Administration (NOAA) issued a statement that snow cover in January on the Eurasian land mass had been the most extensive ever recorded, and that in the US March had been only the 63rd warmest since records began in 1895.

While global warming enthusiasts might take cheer from the NOAA's claim that "average global land temperature" in March was "the warmest on record", this was in striking contrast to a graph published last week on the Climate Audit website by Steve McIntyre. Tracking satellite data for the tropical troposphere, it showed March temperatures plunging to one of their lowest points in 30 years.

Mr. McIntyre is the computer expert who exposed the infamous "hockey stick" graph - that icon of warmist orthodoxy which showed global temperatures soaring recently to their highest level for 1,000 years. He showed that the computer model that produced this graph had been so designed that it would have conjured even random numbers from a telephone directory into the shape of a hockey stick).

On April 24 the World Wildife Fund (WWF), another body keen to keep the warmist flag flying, published a study warning that Arctic sea ice was melting so fast that it may soon reach a "tipping point" where "irreversible change" takes place. This was based on last September's data, showing ice cover having shrunk over six months from 13 million square kilometres to just 3 million.

What the WWF omitted to mention was that by March the ice had recovered to 14 million sq km (see the website Cryosphere Today), and that ice-cover around the Bering Strait and Alaska that month was at its highest level ever recorded. (At the same time Antarctic sea ice-cover was also at its highest-ever level, 30 per cent above normal).

The most dramatic evidence, however, emerged last week with an announcement by NASA's Jet Propulsion Laboratory that an immense slow-cycling movement of water in the Pacific, known as the Pacific Decadal Oscillation (PDO), had unexpectedly shifted into its cool phase, something which only happens every 30 years or so, ultimately affecting climate all over the globe.

Discussion of this on the invaluable Watts Up With That website, run by the US meteorologist Anthony Watts, shows how the alternations of the PDO between warm and cool coincided with each of the major temperature shifts of the 20th century - warming after 1905, cooling after 1946, warming again after 1977 - and how the new shift to a cool phase could have repercussions for decades to come.

It is notable that the German computer predictions published last week by Nature forecast a decade of cooling due to deep-ocean movements in the Atlantic, without taking account of how this may now be reinforced by a similar, even greater movement in the Pacific.

Mr Watts points out that the West coast of the USA might already be experiencing these effects in the recent freezing temperatures that have devastated orchards and vineyards in California, prompting an appeal for disaster relief for growers who fear they may have lost this year's crops.
Mr Watts's readers are amused by the explanation from one warmist apologist that "these natural climate phenomena can sometimes hide global warming caused by human activities - or they can have the opposite effect of accentuating it".

It is striking, in view of the colossal implications of the current response to "the greatest challenge confronting mankind" - as our politicians love to call it - how this hugely important debate is almost entirely overlooked by the media, and is instead conducted largely on the internet, through expert websites such as those run by Mr McIntyre and Mr Watts.

On one hand our politicians are committing us to spending unimaginable sums on wind farms, emissions trading schemes, absurdly ambitious biofuel targets, and every kind of tax and regulation designed to reduce our "carbon footprint" - all based on blindly accepting the predictions of computer models that the planet is overheating due to our output of greenhouse gases.

On the other hand, a growing number of scientists are producing ever more evidence to show how those computer models are based on wholly inadequate data and assumptions - as is being confirmed by the behaviour of nature itself (not least the continuing non-arrival of sunspot cycle 24).

The fact is that what has been happening to the world's climate in recent years, since global temperatures ceased to rise after 1998, was not predicted by any of those officially-sponsored models. The discrepancy between their predictions and observable data becomes more glaring with every month that passes.

It won't do for believers in warmist orthodoxy to claim that, although temperatures may be falling, this is only because they are "masking an underlying warming trend that is still continuing" - nor to fob us off with assurances that the "German model shows that higher temperatures than 1998, the warmest year on record, are likely to return after 2015".

In view of what is now at stake, such quasi-religious incantations masquerading as science are something we can no longer afford. We should get back to proper science before it is too late.