If you ask the Boss, New Jersey doesn't often get the respect it deserves.

But Sunday night, as he took his place among the first-ever inductees to the New Jersey Hall of Fame, Bruce Springsteen thanked his fellow honorees for helping to show the world what the Garden State's got.

"Even with this Hall of Fame, we know another bad Jersey joke is around the corner ... (so we try) not just to do our best, but to stick it in your face," he said, getting an appreciative laugh from the crowd. "That's the fighting spirit of New Jersey." 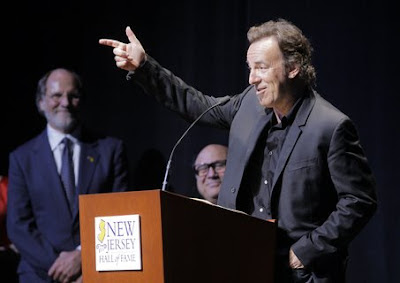 Tony Kurdzuk/The Star-Ledger
Standing on stage with Gov. Jon Corzine (left) and actor Danny DeVito (center), Bruce Springsteen makes his aceptance speech as he is inducted into the New Jersey Hall of Fame.

Springsteen and 14 other honorees were inducted into the Hall of Fame at a star-studded ceremony at the New Jersey Performing Arts Center in Newark.

One by one, famous locals or their representatives took the stage to remind their neighbors, and the world, of New Jersey's contributions.

"It's amazing what we've accomplished, and people just don't know it," said Newark Mayor Cory Booker, who presented several of the evening's awards. "This is the chance for New Jersey itself to recognize who we are."

Ol' Blue Eyes joined the Boss among the musical members of the Hall of Fame's first class.

"I always said that Sinatra owned New Jersey, but he'd rent me a little bit of it down the Shore," Springsteen said as he presented some of Frank Sinatra's family with an engraved crystal plaque.

Gen. Robert Wood Johnson II, familiar to many through the philanthropic foundation that bears his name, was represented by his grandson, New York Jets owner Woody Johnson.

For Underground Railroad pioneer Harriet Tubman, organizers made an exception to the rule all inductees must live in New Jersey for at least five years. Booker presented Tubman's award to the head of the Harriet Tubman Home in Auburn, N.Y.

"Her memory still serves us. Her statues sit on my desk in the mayor's office," he said.

Actress Meryl Streep and former U.S. Sen. Bill Bradley also were among those honored, but they were unable to attend the ceremony.

The New Jersey Hall of Fame is a nonprofit organization formed in 2005 by vote of the state Legislature. Gov. Jon Corzine, who signed the legislation into law, was on hand last night to honor the inductees.

"Tonight's inductees set a standard....It isn't over yet," he said, noting many other Garden State natives are worthy of the honor. "There are lots of heroes, and lots of Hall of Famers here."
Posted by jtf at 9:45 PM