A Three-Way Argument For Game's Integrity 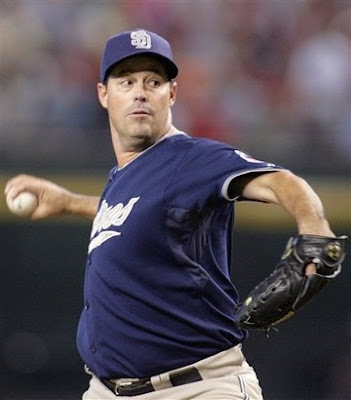 Eventually, your wins, like your sins, will find you out.

In San Diego tonight, Greg Maddux will try to win his 350th game. Later this year, he may pass Roger Clemens's total of 354. But whether Maddux hits either number, the verdict is in. It arrived in the Mitchell report. The greatest right-handed pitcher since Walter Johnson is no longer the tainted Clemens but the mesmerizing Maddux.

Just as Barry Bonds's 762 homers will always be a smaller number -- arithmetic be damned -- than Hank Aaron's 755, so Maddux already has forever outdistanced Clemens.

Searching for silver linings in a steroid age is hard work. But there are some. Perhaps none is brighter than the realization that Maddux, and two of his former teammates, Tom Glavine and John Smoltz, all of them presumptive Hall of Famers, will now be among those who move up most dramatically as we reevaluate the stars of the past 20 years.

Last summer, Glavine won his 300th game; last month Smoltz got his 3,000th strikeout. Yet, Maddux and Glavine, both 42, and Smoltz, 41 next week, are all staggering to the finish. Glavine just ended his first trip ever to the disabled list and Smoltz is currently on the DL. This will be Maddux's fifth try for No. 350.

"It's coming to an end soon," the Braves' Chipper Jones said. So enjoy and value it.

"We all deserve what we've gotten," Glavine said. "Maybe people will finally pay attention to us. You don't want to be elevated on somebody else's mistakes. That's hard to deal with. I don't know Roger well. But this era is what it is and now you've got the greatest pitcher of our time caught up in it.

"But we have done it right. Hopefully, that will be appreciated more and the three of us will be a better example to kids. Maybe we will be the inspiration that you can run your miles and work in the weight room and still be successful."

"Nothing bad will come out about them," Manager Bobby Cox said of the trio that pitched for him for 11 years. "They won their games on hamburgers."

Presumably. But let's add the disclaimer that now defaces baseball: No player of this generation can be proven innocent. Thanks to Clemens and Bonds, nobody can be declared clean. What we can do is refuse to use their impossible achievements as baseball's proper benchmarks. Their seven Cy Young and most valuable player awards should never again dwarf their peers.

Now, when we look at numbers, the stats can tell us an entirely different story. We discover that, for players such as Maddux, there is circumstantial evidence of honesty. 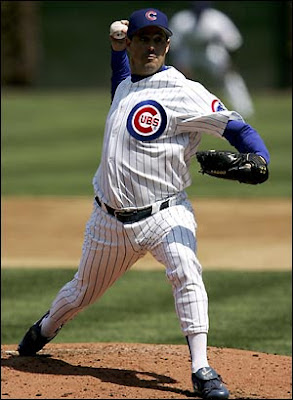 Yet even with the anchor of age, Maddux's career ERA is now 3.12, the same as Clemens's.

"When it comes to the art of pitching, you can't out-think Maddux," Jones said. "He's the best chess player ever. He takes being smart about baseball to a different level."

In Clemens's final seasons, as he changed teams, celebrated multiple retirements, played in the World Series for both the Yanks and his hometown Astros and signed enormous contracts to play fractions of seasons, the man with the Texas-size ego did everything imaginable to attract attention. Like Bonds, he was a glutton for glory. Now, with his shadow greatly diminished, others can step into the light.

"There's never been a better one-two-three on a staff -- ever. The numbers are staggering," Jones says of the trio's 862 wins, plus 154 saves by Smoltz. "When I look back, playing with them will be the good old days."

The three seem to exist for counterpoint. Glavine was homegrown, Smoltz came in trade and Maddux was a free agent. The three even adapted to age differently. Glavine learned a cut fastball to get inside on right-handed hitters, especially after baseball eliminated the "Maddux-Glavine strike" just off the outside corner. Maddux learned to change speeds at even lower speeds, and accepted that he'd never be dominant again. After arm problems, Smoltz went to the bullpen to reduce his innings by 140 a year, then suddenly became the game's best closer, a career cherry-on-top that will presumably put him into Cooperstown. Then, his arm feeling stronger, he went back to starting.

"Smoltz might be a closer again before he's finished," said Cox, whose bullpen has been demolished this season. "You never know."

Though friends and addicted golfers, the three have few personality traits in common. "Smoltz is the most competitive, the best in the playoffs," Jones said. "Glavine is the smart guy, represented the union" in '94. 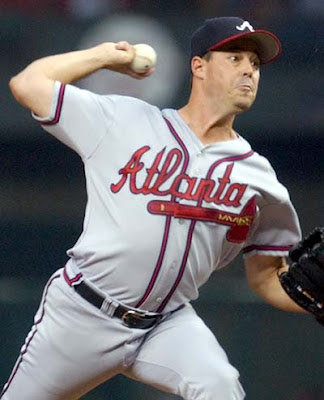 As for Maddux, no major star is more camouflaged or enjoys the sly sardonic mischief of anonymity more. Out of uniform, in glasses and a ballcap, Maddux could take tickets and not be recognized. "He's just really, really crazy," Jones said. "No Mad Dog stories for print," Glavine said. "He's so goofy you can't believe it's the same guy who's so studious, a perfectionist, when he pitches. . . . He's Clark Kent and Superman."

Only in the last year, as landmarks have fallen, has it become difficult to imagine that any of the three will be left out of Cooperstown.

"There's more satisfaction now," Glavine said. "It makes some of the tougher days easier to take, because we know where we are going.

"Everything hasn't always gone swimmingly for us. That's the beauty of what we've done. More than once we've all been counted down and out, had to prove people wrong. It's a testament to our pride."

Apparently, a testament to their integrity, as well.
Posted by jtf at 7:52 PM