Book Review: A Conservative History of the American Left by Daniel Flynn 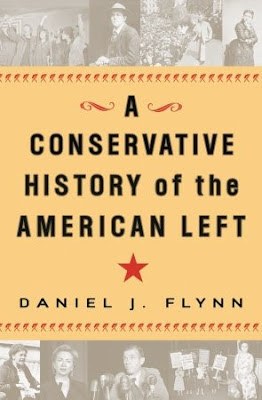 The Left's tendency to repeat its mistakes over and over actually illustrates the conservative view of life: that human nature is fallen, universal, and cannot be permanently improved.

“I write the books that I want to read,” says Daniel J. Flynn. After four years of writing and research, Flynn — whose previous books include

Intellectual Morons and Why the Left Hates America — is back with the irresistibly titled A Conservative History of the American Left.

“Conservatives, unfortunately, have been content to rely on some variant of ‘It all started in the 1960s’ when tracing the origins of the Left,” Flynn continued when reached by email just before the book’s release. “My book goes back to Plymouth Rock.”

Leftists, too, are often content to believe that history began at Little Rock rather than Plymouth Rock, and no wonder: they’d rather forget their one-time embrace of eugenics and other crackpot fads.

For example, in researching early birth control advocate Margaret Sanger’s papers for Intellectual Morons, Flynn told Pajamas Media that he “came across a vile 1932 speech calling for a vast system of concentration camps in America. What do her biographers say about this, I wondered. Nothing. All of the biographers, who had access to the exact information that I had access to, decided to leave that rather consequential information out of their books. Historians shouldn’t be cheerleaders. They should be truth tellers.”

And the truth, according to Flynn, is that the Left has always attracted very peculiar people who’ve preached very peculiar “solutions” to life’s “problems.” In fact, the sameness of the Left as chronicled by Flynn actually illustrates the conservative view of life: that human nature is fallen, universal, and cannot be permanently altered for the better through education or engineering.

Certain leftist types turn up again and again through the centuries, brought back to colorful life in Flynn’s book: fanatics, altruists, adventurers, splitters, spiritualists, free spirits, and one particular type Flynn dubs the “puritanical perverts”: Alfred Kinsey, Timothy Leary, and other “overbearing personalities whose zeal for sex, drugs, or whatever other pleasure made them paternalistic libertines.”

What they all have in common, Flynn writes in Conservative History, isn’t a “laundry list of complaints and wishes” so much as “an attitude”: “It is, in its simplest form, scorn for what is and hopes for what could be. The ideology’s appeal exists in neither the experienced past nor the concrete present, but in the imagined future.”

The Left boasts enthusiasm and energy to spare, but its inability to learn from the past is its fatal flaw. As Flynn explains in the book’s introduction, “because of the suspicions of tradition inherent within radicalism, [the Left] largely ignores that past.” After all, visionaries “preoccupied with the triumphal future cannot pause to learn from the mistakes of the past.”

This refusal to check the rear-view mirror is reflected in the Left’s compulsion for coining extravagant, inapt, and frequently offensive historical analogies: these days, every conservative leader is “Hitler”, every war is “Vietnam,” and every petulant protester is the new “Rosa Parks.”

As Flynn points out to devastating effect, the sheer stupidity of such comparisons should, by rights, be enough to cripple them as rhetorical devices; alas, widespread historical illiteracy and an aversion to criticizing “protected” identity groups render healthy mockery almost impossible. Hence these poor analogies metastasize, bringing the level of public discourse down yet another notch. To cite just one of many examples throughout the book:

Gay groups, for instance, were the fiercest defenders of the bathhouses that served as incubators of the [AIDS] virus. … The publisher of New York City’s main gay newspaper, once health officials managed to order the baths closed (a move opposed by all but one San Francisco gay group), castigated a Centers for Disease Control official: “Now that you’ve succeeded in closing down the baths, are you preparing boxcars for relocation?” That the baths themselves so closely paralleled the death camp “showers,” ostensibly hygienic chambers in which victims entered oblivious to the death that awaiting them, seems never to have occurred to the miasmic authors of wildly stretched analogies.

“The conflict between a Force Left and a Freedom Left is another theme,” Flynn explained in our interview. “One Left says, ‘Smoke whatever, bed whomever, work whenever’. Another Left says, ‘We will tell you how to run your business, we will spend your money better than you do, we will uplift your behavior to conform to our ideal.’ Often, frustrated by their inability to attain their desired results, those on the Freedom Left will convert to the Force Left. The transition from Yankee anarchism to anarcho-communism in the 1880s and the mutation of some freedom-loving hippies to New Left radicalism in the 1960s would be two good examples of the friends of freedom defecting to the friends of force.

“Another theme would be the difficulty of [establishing] an American Left. The first word stands for freedom, faith, flag, family. The second word stands against all that. How to reconcile an ideology against capitalism, the nuclear family, patriotism, and traditional religion with a country so closely identified with those ideas? That’s the constant conundrum of the American Left.”

What surprised Flynn most during the research for A Conservative History of the American Left, he told me, was the influence the Bible had once had upon leftist theory and practice:

Christianity once served as the primary influence upon American leftists. … Secular reformers admired the sacrifice and the communal unity of the early religious fanatics but not, generally, the religious beliefs. Religion and politics mixed in the Social Gospel, whose enthusiasts ultimately reached for more social, less gospel. … The secular Left kept the forms without the function.

So, I asked, will liberal reviewers criticize Flynn’s latest book with the same venom they recently unleashed upon Jonah Goldberg’s Liberal Fascism?

I think honest leftists will like A Conservative History of the American Left. It outlines the Left’s failures and shows examples of success, providing a guide of what to avoid and a template for better results. The book frees the Left from the manacles of Marxism by focusing on an American Left that often has nothing to do with the European contagion spread by Karl Marx. In other words, there is a much more honorable tradition on the American Left that includes people like Henry George, Edward Bellamy, and J.A. Wayland that gets overlooked by leftist historians too preoccupied by Marxism to acknowledge that leftism and Marxism are not synonymous. By focusing on people, the book humanizes the Left. It’s clear from reading it, I think, that I admire many of the people — free-love advocate Mary Gove Nichols, Appeal to Reason publisher J.A. Wayland, and SDS founder Al Haber to name a few — I write about even if I disagree with them. I think the title of the book is truth in advertising. Alas, most leftists won’t like the book because it takes a critical view of a movement and its activists that, in their view, are above criticism.

Conservative readers, on the other hand, will appreciate Flynn’s accuracy, readability, and humor. Even longtime Left-watchers will discover new nuggets, such as Michael Moore’s old civics teacher remembering the future filmmaker: “He’s always been ugly, fat, and obnoxious, a troubled child with no close friends to speak of.”

It’s a testament to Flynn’s talent that reading A Conservative History of the American Left is as enervating as it is entertaining. In almost every chapter, the Nation issues another ridiculous prediction, another utopian starts another doomed commune, and another idealist promises the end of all war, famine, and bigotry — and attracts legions of foolish followers. Throughout, very few of Flynn’s “characters” express regret for the lives they’ve ruined or outright ended.

“People die, but the Left will endure,” Flynn told me. “The ideas of a brotherhood of man, heaven on earth, and human perfection are too beautiful to perish as ideas, even if they’re too utopian to succeed in reality. Leftists are idealists, and the havoc their ideas cause in the real world doesn’t seem to affect a rethinking of their ideas in their imaginations.”