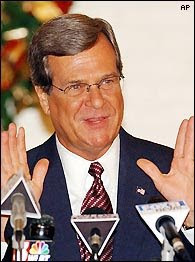 WASHINGTON -- Well-connected Republicans in Mississippi were shocked by more than the unexpected nature of Trent Lott's announced resignation Monday. They were stunned that Lott, in good health at age 66 and at the top of his game, was leaving the Senate one year into his fourth term in order to make more money.

One of Lott's longtime political associates put it this way to me (asking not to be quoted by name): "Can you imagine Pat Harrison, Jim Eastland, John Stennis [Mississippi senators of the past] or, for that matter, Thad Cochran [the state's other senator today] quitting the U.S. Senate to go into business? I cannot."

It is understood in Washington and Jackson why Lott is leaving without serving even the first two years of a six-year term. By getting out now, he can collect big lobbyist money in one year instead of having to wait two years under new congressional ethics regulations. Rep. Chip Pickering would have been Gov. Haley Barbour's certain choice to replace Lott had he not announced three months ago he would not seek a seventh term in Congress. Though 22 years younger than Lott, Pickering is also leaving for financial reasons. That makes it hard for Barbour to select Pickering.

Members of Congress talk among themselves about "getting out to make some money," and they do not mean pocket change. The swollen federal government and concomitant growth of massive lobbying firms means ex-lawmakers like Lott and Pickering can quickly pull down a seven-figure income. For many in today's Congress, big money trumps public service.

Actually, the federal legislators know how to build tidy nest eggs without spending one day in the private sector -- nobody much better than Trent Lott. Except for one year as a practicing attorney fresh out of law school, Lott has spent his career on the public payroll -- four years as a congressional staffer, 16 in the House and 19 in the Senate. Nevertheless, the Center for Responsive Politics in 2005 calculated his net worth between $1.4 million and $2 million or 42nd among 100 senators. It put his annual income from the Senate and private sources at $289,710, in the top 1.5 percent of American income earners.

That's not bad for the son of a shipyard worker and exceeds the fondest dreams of his fellow citizens, but it is not enough for Lott. He did not want to run for re-election last year, telling friends it was time to "make some money." Republican leaders, fearful of losing his seat and control of the Senate, prevailed on him to run. In announcing his candidacy two years ago, he said his long experience was needed to help Mississippi's "recovery effort from Katrina."

Lott's early exit casts a shadow on an extraordinary congressional career. Elected to Congress in 1972 at age 31 as a defender of Richard M. Nixon, he voted for impeachment as a Judiciary Committee member when faced with the evidence. He was the House's second-ranking Republican at age 39, won the same job in the Senate 14 years later, as 1984 Republican platform chairman shaped a supply-side document in defiance of the White House staff design and served six years as the most effective Republican Senate majority leader of his time.

Driven out of the leadership in 2002 when President George W. Bush would not stand by him against spurious charges of racism, Lott instead of resigning picked himself up and became an effective backbencher. Against all expectations, he returned to the leadership after the 2006 election by winning a hotly contested campaign for Republican whip.

When Lott in 2005 was pondering whether to run again, he expressed concern about taking on another six-year commitment -- not one year. At this week's conference in Pascagoula, Miss., Lott hurt his credibility by saying the new two-year ban "didn't have a big role" in his decision. "And," he added, "as I've talked to my former colleagues, they say that a lot of what you do anyway is involved with consulting rather than direct lobbying." But Lott will have to do more than consult to earn the big bucks that have led him out of the Senate.
Posted by jtf at 8:09 AM