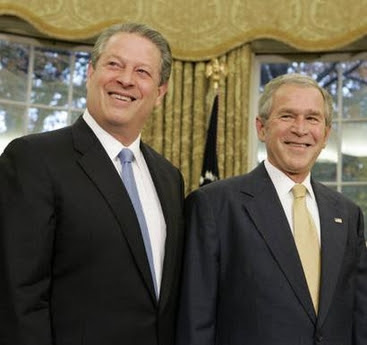 When Nobel laureate Albert Gore, Jr. collects his Peace Prize in Oslo on December 10, he should tell the gathered Norwegians exactly what he meant when he remarked about global warming:

“I believe it is appropriate to have an over-representation of factual presentations on how dangerous it is, as a predicate for opening up the audience to listen to what the solutions are,” Gore said in the May 9, 2006 Grist Magazine.

Gore’s approach infects the debate and even the methodology of so-called “global warming.” From the former vice-president to unseen academics, some who clamor for statist answers to this alleged climate crisis employ dodgy measurement techniques, while others embrace hype and fear-mongering to promote massive government intervention to combat an entirely questionable challenge. Worse yet, this applies to reputedly objective researchers, not just opinionated activists.

For starters, U.S. temperature data suffer from the “garbage in, garbage out” syndrome. As surfacestations.org meteorologist Anthony Watts discovered, numerous NASA and National Oceanic and Space Administration temperature sensors are situated not in open fields at uniform heights, as required, but near parking lots, beside central-air exhaust ducts, and even above barbecue grills. These artificially elevate temperature reports.

Since 1970, previously whitewashed temperature sites have been painted with semi-gloss latex. Because it absorbs more heat, Heartland Institute scholar James Taylor wrote in November’s Environment & Climate News, “latex paint at official temperature stations may account for half of the U.S. warming reported since 1970.” Thus, America could reverse half the detected post-1970 warming that aggravates climate activists, simply by stripping this latex paint and whitewashing these observation structures.

Global-warming enthusiasts should clarify why America was hotter during the less-developed Great Depression, yet cooler in purportedly carbon-choked 1998. In fact, 2000, 2002, 2003, and 2004 were cooler than 1900 -- three years before the launch of the Ford Motor Company.

“The alarmists who trumpeted recent years as ‘warmest ever!!!’ in the United States (by a mere tenth of a degree) now dismiss this reversal -- 2000 and subsequent years being cooler than 1900 -- as just being a tenth of a degree or so,” said Competitive Enterprise Institute scholar Chris Horner. “Well, either that’s a big deal whichever direction it falls, or it isn’t. Which time are you lying?”

Meanwhile, the British High Court of Justice ruled October 10 that Gore’s picture, “An Inconvenient Truth,” peddles convenient untruths. Mr. Justice Burton determined that “some of the errors, or departures from the mainstream, by Mr. Gore…in the course of his dynamic exposition, do arise in the context of alarmism and exaggeration in support of his political thesis.” The court ordered that British secondary schools could present Gore’s movie only if students receive a Guidance Note distancing the Education Department from “the more extreme views of Mr. Gore” and admitting there are two sides, not one, to global warming.

Burton cited nine points in Gore’s “political film” that either were “apparently based on non-existent or misunderstood evidence” or “upon lack of knowledge or appreciation of the scientific position.” Among them: Despite Gore’s contrary claims, melting polar ice caps will not raise sea levels by 20 feet any century soon, global warming is not melting the glacier atop Mount Kilimanjaro, nor did it intensify Hurricane Katrina, nor are polar bears dying due to melting ice.

U.C. Santa Barbara emeritus professor Daniel Botkin recently lamented in the Wall Street Journal that some of his warming-oriented colleagues believe “the only way to get our society to change is to frighten people with the possibility of a catastrophe, and that therefore it is all right and even necessary for scientists to exaggerate…‘Wolves deceive their pray, don’t they?’ one said to me recently.”

Oslo’s applause notwithstanding, egregious errors, distortions, and lies have no place in what is supposedly unbiased scientific inquiry regarding one of Earth’s most controversial questions.

As the U.N. Framework Convention on Climate Change begins the task of negotiating a replacement for the Kyoto Treaty, global warming deniers are stepping up their desperate effort to smear Al Gore over his campaign to make the world aware and informed on the issue of climate change. This on the heels of the U.N. Intergovernmental Panel of Climate Change recent Fourth Assessment Report – Climate Change 2007 – which concludes that global warming is “unequivocal” and carbon dioxide already in the atmosphere commits the world to sea levels rising an average of up to 4.6 feet. According to the report, eleven of the warmest years since instrumental records began, occurred during the last twelve years. U.N. Secretary-General Ban Ki-Moon states, “Only urgent, global action will do,” and he has called on the United States and China — the world’s two biggest polluters — to do more to slow global climate change.

Despite the overwhelming international support for these conclusions, global warming deniers like Deroy Murdock – made up of mostly conservatives, free-market libertarians and energy companies – continue their attacks. I’d like to shed light on the sources and conclusions in his commentary.

Murdock begins with the premise that “overrepresentation of factual presentations” in Al Gore’s An Inconvenient Truth is somehow lying. His conclusion is totally misleading. This statement attributed to Gore simply means having more facts than necessary.

Murdock then tries to discount global warming researchers as “opinionated activists” by quoting from surfacestations.org’s Anthony Watts, a discredited Chico, CA, TV weatherman, who is best known for stating that the power crisis in California was due to excess internet use. Try to find his published works in peer-reviewed journals. There are none. Watts also raves about a British TV documentary, The Great Global Warming Swindle, which has drawn widespread complaints from the scientific community citing numerous errors and misleading claims. Professor Carl Wunsch, whose views in the film were edited and distorted, has since repudiated the film and compared it to propaganda. Yet, Watts continues to call the film "a masterful documentary."

Next, Murdock introduces us to Steve McIntyre of climateaudit.org and founder of an oil and gas exploration company. He claims to have found major problems with a recent reconstruction of the past climate (called the Hockey Stick because of its shape when charted). Even though major and glaring errors have been found in his writings, he continues to be a favorite with the global warming "skeptics."

Murdock goes on to quote Chris Horner, “scholar” with the Competitive Enterprise Institute (CEI). By adding the word scholar, Murdock implies that Horner is a learned scientist. In fact, Horner is legal counsel for CEI, an organization that has accepted more than $2 million from ExxonMobil since 1998. Horner has been particularly vocal in arguing that the National Assessment on Climate Change was illegally produced.

As if Murdock’s misrepresentation of Gore’s words isn’t enough, he goes on to do the same for the British High Court. The court sided with schools, allowing the screenings of An Inconvenient Truth to continue. The court ruled the film was accurate in its four main scientific hypotheses, "each of which is very well supported by research published in respected, peer-reviewed journals.” The court challenge was funded almost entirely by a mining concern owned by Robert Durward, a long-time critic of environmentalists.

Murdock is obviously a well-educated wordsmith. The reasons behind this careless attack may not be obvious, but it helps to know a little about Deroy Murdock and how out of step he is with reality. A conservative with a libertarian bent, he is a Senior Fellow with the Atlas Economic Research Foundation, whose corporate donors include ExxonMobil, which has contributed over $780,000 since 1998. He is also a contributing editor with the National Review. He believes Saddam Hussein was involved in perpetrating the September 11 terrorist attack in New York. His article titled Three Cheers for Waterboarding, calls waterboarding "something of which every American should be proud."

It becomes clear that there is commonality among the individuals and organizations quoted in this commentary -- ties to the fossil fuel industry being chief among them. Their attacks are thinly veiled, poorly reasoned, and go beyond partisanship and difference of opinion. They are part of a well-coordinated effort to keep the American public doubting that global warming is real, often using red herrings such as environmentalists are anti-American, endanger our national security, are in it just for the money, or want us to live in the Stone Age. Sound familiar? Murdock does a great disservice by making their case. And the media should be challenged for blindly trying to present a “balance of opinion” when it comes to global warming. Some still believe the earth is flat. Should we give them equal time?