The "Good Immigrant" - Myth vs. Reality 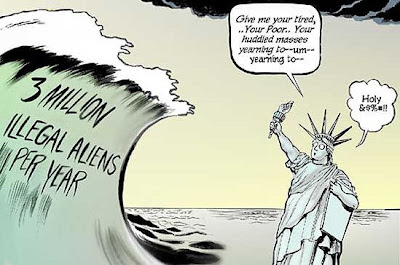 Among the more annoying ploys of the open borders crowd is the idea that we need endless immigrants because we wouldn't want to miss getting someone really valuable.

Einstein is the perpetual example—what if restrictionists had kept him out? They never seem to mention Al Capone. (Former New York mayor Ed Koch pulled this trick when reviewing Peter Brimelow’s Alien Nation.)

As if the brilliance of the 20th century's greatest physicist were a reason to import millions of illiterate peasants: the argument makes no sense.

Still, with multiculturalism, the quantity is often more important than the quality. So we get a continuous barrage.

One regular salvo from the opposing shore is the "Immigrants of the Week" column which appears in the ILW.com email newsletter, targeted at immigration lawyers and other enemies of American sovereignty—what we call the “Treason Lobby.”

Actually, the ILW column can be a hoot, because it’s filled with people you never heard of and many you wouldn't want to know about. A recent offering (Nov 5) presented Andrew Grove, Hikaru Nakamura, Philippe Kahn, Isaac Larian, and Sonya Thomas. These are not exactly household names.

But Sonya Thomas might ring a bell if you follow the "sport" of competitive eating—think about the Nathan's hot dog face-stuffing contest held every July 4th—she is a champion glutton. She gobbles down the wieners that Americans just don't want to devour.

And Isaac Larian is the inventor of the extremely annoying Bratz Doll.

More seriously, multicultural immigration requires sustained and massive propaganda to convince citizens that importing culturally-alien foreigners is a good idea. After all, opening one's community to outsiders who may well have a hostile agenda (from jihad to reconquista) runs counter to the most basic aspects of human psychology, which is deeply tribal, not globalist.

Unfortunately, many foreigners come for the wrong reason. Criminals of the aspirational sort come to America because there is a lot more swag available for theft than at home. MS-13 and other drug gangs want to be here because this is the largest market for their illicit products.

Many others simply see America as a full refrigerator of perverse opportunity, from cars to be driven drunk to easy money to be made from illegal jobs using fraudulent identification. It doesn't help that many are illiterate peasants from a deeply corrupt country, and bring a marauder attitude to pillage and take whatever they can get. They don't come to be neighbors.
It shouldn't be a surprise then that American prisons have more than their share of foreign inmates (30 percent of federal prisoners in 2000).

So, from the other side of the tote board, here is an alternative list of "immigrants" that the immigration lawyers don't want to discuss (except in terms of billable hours):

* Alfredo Ramos was sentenced on Nov. 19 to 24 years in prison for the involuntary manslaughter deaths in Virginia Beach of teenaged best friends Tessa Tranchant, 16, and Alison Kunhardt, 17. He could have received a sentence of 40 years, so the judge must not have had the toughest punishment in mind. However, grieving father Ray Tranchant stated that the sentence was actually a decent one, compared to some of the handslaps that Virginia judges deliver.

The illegal alien had prior convictions for drunk driving before he killed the girls but was not deported. Instead, Alfredo Ramos was allowed to remain in America and end the lives of two girls who had everything ahead of them.

* Daniel Paredes pleaded guilty in early November to the murder of his live-in girlfriend Mayanim Betancourt in St. Louis County. He was miffed that she had become pregnant with the child of another man, so he strangled her. Illegal alien Paredes has a wife and children back in Mexico.

Family values in the extreme! Too much of a good thing can be bad for staying out of jail. (He could spend the rest of his life in prison—courtesy of the American taxpayer.)

* Alfonso Cedillo Maldonado was so drunk, he sideswiped a police car. While driving down the highway in the wrong direction. Imagine how drunk you would have to be to do that.

In fact, his blood alcohol level measured 0.26, more than three times the legal limit in Virginia.
State Trooper Maxwell Williamson, the driver of the sideswiped police car, suffered a bulging disk in the July accident and is still on disability.

Maldonado, an illegal alien from Mexico, received 18 months in prison for driving drunk and without a license.

* Jesus Bernal pleaded no contest in a Florida court to three counts of DUI manslaughter and two counts of DUI with serious bodily injury in the terrible head-on crash June 24, 2006, that killed Jim and Margie Rook. A passenger in Bernal's pickup truck also died. For his crime, Bernal received a prison sentence of 55 years.

Interestingly, a recent search for "Hispanic immigrant head-on crash OR accident" revealed 104,000 results, a numerous outcome for a limited subject. Not only do Hispanics drive drunk at higher rates than Americans (a fact even NPR admits), they tend to drive at more extreme levels of inebriation, which accounts for the "head-on" aspect of the crashes: many are speeding in the wrong direction. Driving drunk is culturally "normal" in Mexico, where young men may believe that several drinks make them smarter and better drivers. [Hispanic DWIs rooted in immigrants' culture Lifestyle, isolation figure in driving drunk, By Marti Maguire and Kristin Collins, News & Observer, April 1, 2007]

* Ricardo Contreras de la Torre lucked out with a ridiculously short prison sentence of 2-3 years for a drunk-driving felony death by motor vehicle. His drunk driving caused the death of George Smith of Cary, North Carolina, who worked as a computer programmer at Duke University.

* Marlon Berrioz broke into the home of a woman in Alexandria on November 3 and raped her at knife-point, according to police. He had earlier worked for the victim as a painter and had sneaked into the house through a window in the back.

Berrioz had not been directly hired by the Alexandria woman, but by a painting company. Whatever the means, however, it is a bad idea to have foreigners of unknown character casing your home.

Please note that this short compilation is a snapshot from November news reports, and is by no means comprehensive. The men were chosen to illustrate the diversity of crimes committed by uninvited foreigners in our midst and that such cases occur all the time.

The point is that no amount of “cheap labor” can possibly balance the human misery caused by the foreign criminal onslaught.

The idea that "immigrants"—using that term as elites do to encompasses villainous invaders as well as those officially welcomed—are any sort of net positive to American society is ridiculous.

The preventable pain and death caused by immigrants of the week/year/decade must stop.

Brenda Walker (email her) lives in Northern California and publishes two websites, LimitsToGrowth.org and ImmigrationsHumanCost.org. She actually admires several immigrants, in particular the pioneering environmentalist John Muir, songwriter Irving Berlin for writing "God Bless America" and Peter Brimelow for criticizing immigration before it was cool to do so.

I don't know who the hell Brenda Walker is but what she's saying is absolute ignorance. Yes, there are some horrible immigrants out there , but there are horrible native-born U.S. citizens, too. It's as though you're implying that Hispanics are somehow more violent than whites. Not all Hispanics are drug-dealers, and gangsters(or whatever the hell you think we are), and the few that are are the exceptions not the rule. The vast majority of immigrants are here for a better life for them and their families.