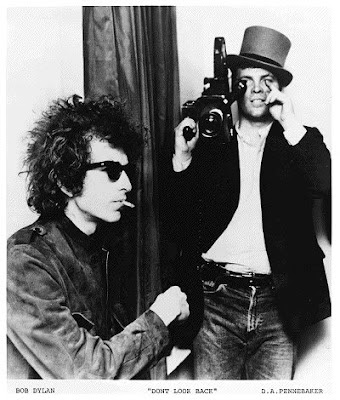 Back to ‘Don’t Look Back,’ This Time With Dylan’s Songs in the Spotlight

The great relief of D. A. Pennebaker’s “65 Revisited” — which pulls together never-released footage shot for his documentary “Don’t Look Back” — is that this time you can hear the songs in their entirety. Because Mr. Pennebaker wanted “Don’t Look Back” to be about Bob Dylan, not his 1965 British concert tour, he made the somewhat maddening decision to cut down the songs in that first film to tantalizing bits and pieces. The problem of course being that the songs were as much a part of this youthquaking sensation as his pipe-cleaner-skinny legs, his fuzzy ’fro, bobbing head, sly smile, riffs, rants, puns and playful, otherworldly genius.

“65 Revisited” restores some of the abridged and omitted pleasures with onstage performances (“It’s All Over Now, Baby Blue,” “It’s Alright, Ma (I’m Only Bleeding),” “It Ain’t Me, Babe”), green-room idling (“It Takes a Lot to Laugh, It Takes a Train to Cry”) and a duet with Joan Baez (“Laddie”), who always seems to be warbling or smiling at some intensely private joke. One of the film’s most suggestive scenes finds Ms. Baez asking Mr. Dylan if he can “concentrate” long enough to help her with some songs. Mr. Pennebaker, a founding figure in the direct-cinema movement, never comments on his material, so you’re left to wonder what in the world all that was about. (He never even tells you that the singers were lovers.)

A fast 65 minutes, “65 Revisited” is best appreciated as an extension of “Don’t Look Back,” a kind of cinematic footnote. (Both are included in the DVD box edition of “Don’t Look Back” released in February.) Some of the same players appear in both documentaries, including the tour manager, Bob Neuwirth, and Mr. Dylan’s manager, Albert Grossman, who enlisted Mr. Pennebaker to make the first film and served as one of its producers.

Nico also swings by briefly, fluttering her feathery eyelashes. (Marianne Faithfull plays it quieter in “Don’t Look Back.”) Women and girls cling to the edges of these documentaries, waiting for Mr. Dylan, yelling for him, running after him, clutching at him. It’s like watching someone try to catch mercury with her hands.

“Don’t Look Back” opens with the much-copied cue-card rendition of “Subterranean Homesick Blues,” in which a sardonic-looking Mr. Dylan flips through cards hand-printed with words and phrases from the song while standing in an alley. “65 Revisited” ends with a different take on the cue-card routine, though this one takes place on what looks like a very nippy city roof. (A third cue-card clip is included in the DVD box.)

The setup resembles the alley version — Mr. Dylan drops cards while standing (if visibly shuddering) on the right of the frame — though in this version his Columbia Records producer, Tom Wilson, makes a stylish stand-in for Allen Ginsberg. Wearing shades, an overcoat and an insouciant fez, Mr. Wilson looks as cool as it gets, cooler than even that poetic alley cat.

Directed by D. A. Pennebaker; directors of photography, Howard Alk and Mr. Pennebaker; edited by Walker Lamond and Mr. Pennebaker; produced by Frazer Pennebaker; released by Ashes & Sand Inc. and Pennebaker Hegedus Films. At the IFC Center, 323 Avenue of the Americas, at Third Street, Greenwich Village. Running time: 1 hour 5 minutes. This film is not rated.
Posted by jtf at 9:03 AM