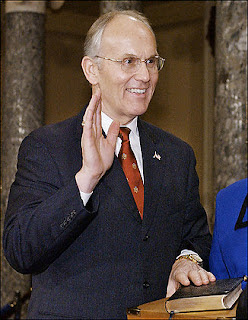 August 30, 2007
http://www.vdare.com/
"When, in disgrace with fortune and men's eyes, I all alone beweep my outcast state," wrote Shakespeare. Sen. Larry Craig knows today whereof the bard spoke.
Rarely has a United States senator fallen so fast from grace or been so completely abandoned.
As the nation now knows, Craig was arrested in June in an airport men's room in Minneapolis, charged with propositioning an undercover cop, who was on duty there because the place had become notorious.
According to the officer, Craig, in the next stall, flashed known signals of a man seeking anonymous and immediate sex.
Rather than fight the charge, Craig pleaded guilty to a disorderly conduct misdemeanor. This week, the story exploded and Craig is fighting what appears a losing battle for his career and reputation.
In a statement carried nationally, he declared his innocence of any allegation of immoral conduct. I did nothing wrong, I am not gay, he said again and again.
Yet it requires a suspension of disbelief to accept the complete innocence of Sen. Craig. After all, he pleaded guilty, and for years similar rumors have swirled about him. The Idaho Statesman has produced a tape of a man who claims to have had a recent sexual encounter with Craig in a men's room at Union Station in Washington, D.C. [Men's room arrest reopens questions about Sen. Larry Craig, By Dan Poskey, August 28, 2007]
Craig denies all and calls the Statesman investigation of his private life, going all the way back to college days, a witch hunt. In his favor, after 300 interviews, the Statesman came up with nothing solid save the Union Station allegation and the airport incident.
As ever, such episodes reveal almost as much about the accusers as about the accused.
Reveling in Craig's disgrace, the liberal media not only cast the first stone, but most of them. They are mocking Craig as a family-values hypocrite who indulges privately in conduct he publicly condemns. But even assuming Craig has led a second and secret life, would that automatically make him a hypocrite, a fraud, an Elmer Gantry?
Is there no possibility a man can believe in traditional morality, yet find himself tempted to behavior that morally disgusts him? Is it impossible Craig is driven by impulses, the biblical "thorn in the flesh," of which Paul wrote, to behavior he almost cannot control?
Why else would a United States senator take the incredible risk of disgracing himself and humiliating his family, and ending his career, for a few minutes of anonymous sex in an airport men's room?
Is every alcoholic who falls off the wagon a hypocrite if he has tried to warn kids of the evil of alcohol? Many men have tried to live good lives and fallen again and again. They are called sinners.
Yet, if the charges are true, and it appears they are, Larry Craig has worse personal problems than his impending loss of office.
And how have his colleagues responded?
Republicans immediately denounced him, stripped him of all his seniority rights, and ordered an ethics committee investigation and a study of whether more immediate action should be taken.
Sens. John McCain and Norm Coleman called on him to resign. "(W)hen you plead guilty to a crime, you shouldn't serve," said McCain, adding, "That's not a moral stand."
Sorry, but the morality here is far more relevant than the admitted misdemeanor. If Craig had pleaded guilty to disorderly conduct for punching out an obnoxious heckler, he would not be friendless today.
The silence of most Democrats is understandable. If you belong to a party that declares homosexuality a moral lifestyle, that perhaps should be elevated to the level of matrimony, then what would Craig be guilty of, other than being horribly indiscreet?
Up to this week, Craig was one of only two senators to have come out for Mitt Romney. He headed up the Romney campaign in Idaho. He vouched for Mitt in Congress and the country.
And Mitt wasted no time throwing his Idaho chairman under the bus, adding he deserved it: "Once again, we've found people in Washington have not lived up to the level of respect and dignity that we would expect for somebody that gets elected to a position of high influence. Very disappointing. He's no longer associated with my campaign."
Larry Craig's conduct "reminds us," said Mitt, "of Mark Foley and Bill Clinton ... of the fact that people who are elected to public office continue to disappoint, and they somehow think that if they vote the right way on issues of significance or they can speak a good game, that we'll just forgive and forget."
"And frankly, it's disgusting."
That Mitt was decisive, that he was a "good butcher," as a prime minister must be, said Asquith, is undeniable. This speaks well of Mitt's executive intolerance of failures and failing. But one did not hear much here in the way of compassion for Larry Craig or his family.
Some senators, like Chris Dodd, cut Larry Craig some slack and asked that we hear him out before sentence is passed.
Count your friends when you're down, Nixon always advised.
Patrick J. Buchanan needs no introduction to VDARE.COM readers; his book State of Emergency: The Third World Invasion and Conquest of America, can be ordered from Amazon.com.
Posted by jtf at 1:38 PM