Dan Shaughnessy: This old-timer's game was one for the ages 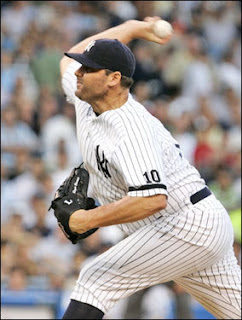 NEW YORK -- The stars came out to see Roger Clemens last night. It was as if they'd heard this was going to be one last chance to see Baryshnikov or B. B. King.

Paul McCartney, Kevin Bacon, Alec Baldwin, Penny Marshall, Billy Crystal, and 55,000 friends trekked to the ballpark on 161st Street to see the retro Rocket pitching against the team that sent him into his twilight 11 years and four Cy Youngs ago. In honor of Sir Paul, the Yankee Stadium sound system played "When I'm Sixty-Four" just a few seconds after "When I'm Forty-Five" threw his final pitch.

Clemens beat Josh Beckett (13 hits!) and the Red Sox, 4-3, with six innings of two-hit pitching. He consistently hit the low 90s on the gun, took a no-hitter into the sixth, and threw 98 pitches before turning the game over to the bullpen. Not bad for a guy who broke in with the Sox the year after Yaz retired (I think I still had my 8-track player then).

"Someone in my position . . . obviously, my complete games are over," said Clemens. "So it's good to have the bullpen. I'm enjoying baseball in the East. It's nice when things matter. It's great to see guys wearing it on their sleeves."

Baseball in the East . . . nice when things matter. Welcome back to the fight, Roger.

The Red Sox remain in good shape to win the American League East, but there's been something troubling about these first two nights in the Bronx. After five months of underachievement and occasional humiliation, the Yankees are in great shape to make the playoffs and the prospect of another Boston-New York AL Championship Series is very real. Though the Sox may not have needed Clemens to win the division, he could still come back to haunt them in October. 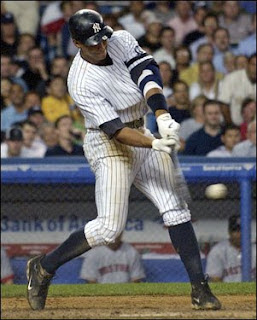 Alex Rodriguez connects on a pitch from Josh Beckett in the seventh inning for a solo home run.

"What happened early here put us way behind," acknowledged Clemens. "Now it's important to win every ballgame. Derek Jeter talked about it. This is playoff baseball now."

The Rocket was a tad on the wild side (five walks and only two strikeouts) in his 15th start, but he's been a monstrous presence at Yankee Stadium since coming back for a prorated $28 million. He is 4-1 with a 2.62 ERA at home. Maybe Tom Werner can work on a video to bring him to Boston in 2008.

Socks high, in old-timey fashion, the old guy finished his warmups at 6:59 p.m., then went to the back of Monument Park and touched the plaque that honors the great Bambino. The House That Ruth Built is closing down for good next summer, and you wonder if Clemens and public address icon Bob Sheppard might still be around for the famous final scene.

Walking with the gods is nothing new to the Rocket. Among Red Sox chuckers, he shares first place in all-time wins (192) with an ancient righthander named Cy Young. He trails only Nolan Ryan in career strikeouts and ranks third behind Lefty Grove and Christy Mathewson in winning percentage. The last time a pitcher with more wins than Clemens started against the Red Sox, the man's name was Walter Johnson.

Clemens hadn't pitched against the Sox since the seventh game of the 2003 ALCS, so there was something remarkable about seeing him on the mound facing Julio Lugo at the start of the night. The first pitch split the plate for a called strike. On the second pitch, Lugo went out on a hard grounder to first.

As predicted, Clemens had a score to settle. He was watching Tuesday when Daisuke Matsuzaka drilled Alex Rodriguez, and we all know Andy Pettitte and Joe Torre are not into retribution. It's different with the Rocket. His fifth pitch of the night hit Dustin Pedroia.

Pedroia took his base like a man, then was thrown out trying to steal. David Ortiz popped up to put Clemens in the dugout. There was nothing Schillingesque about the Rocket's reentry. He hit 93 miles per hour on the gun.

It's not very often that the Sox face a pitcher who faced manager Terry Francona, but a lot of worlds collide when Clemens is involved. Francona was not managing the Red Sox when Clemens last pitched against Boston (fellow named Grady had the job then), but Francona had an answer when asked about the last time he saw Clemens in person.

"I saw one up around my neck," said the manager. "I'd hit a double off him and I was cheating a little bit. It was a pitch I shouldn't have gotten to, and he put me in my place the next time up. It looked pretty fast. I remember that." 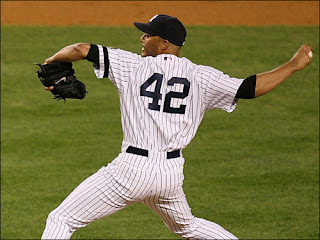 Mariano Rivera delivers in the 9th.

The double came in 1988 at the old Cleveland Stadium when Francona was a member of the Indians and Clemens was in his third full season with the Red Sox. Over the course of his career, Francona went 1 for 8 against the Rocket.

Clemens has never thrown a no-hitter. Probably never will. He threw a lot of pitches early last night, and there was no way he was going nine, but when Pedroia flied to center to start the sixth, it made you sit up and watch. Then, on a 1-0 pitch, Ortiz broke up the no-no with a shot into the third deck in right. With two out, Clemens gave up his fifth walk, then a single to J. D. Drew, but he had enough to finish the inning.

"It's fun," said Clemens. "Tomorrow will be very important for us."

Tomorrow is today. The rivals return to the Bronx this afternoon when the bloody sock guy will be asked to stop the bleeding.

Dan Shaughnessy is a Globe columnist. He can be reached at dshaughnessy@globe.com.
Posted by jtf at 9:48 AM